Thursday 25th October 2018:   Training officially ended at 08.30 this morning and Registration will continue till 15.00hrs. One very important aspect is now underway, namely the official speed setting flights for individuals and teams, which will probably take till early afternoon to finalise.

The Opening Ceremony is scheduled to take place outside the tunnel with a start time of 17.00hrs, followed by the competition draws and the Competitors and Team Leaders' meetings. 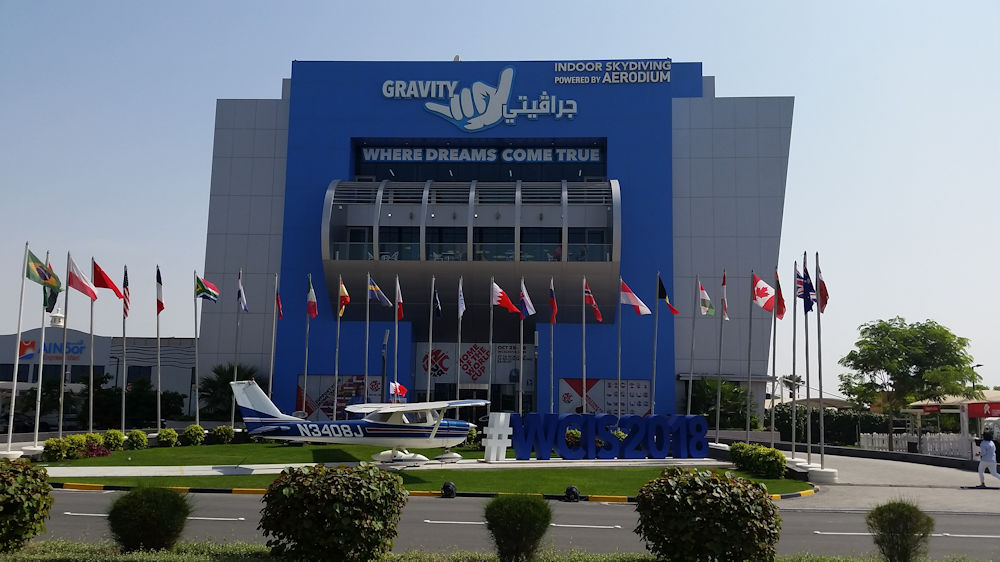 A little before 17.00hrs the competitors were invited to assemble outside in readiness for the Opening Ceremony.  Several jumpers were already airborne in a helicopter and would jump with smoke as well as the national flag of Bahrain and the logo of the WCIS. The actual ceremony would take place inside a large geodesic dome adjacent to the tunnel complex were it was evident from the seating arrangements that many VIPs were expected. 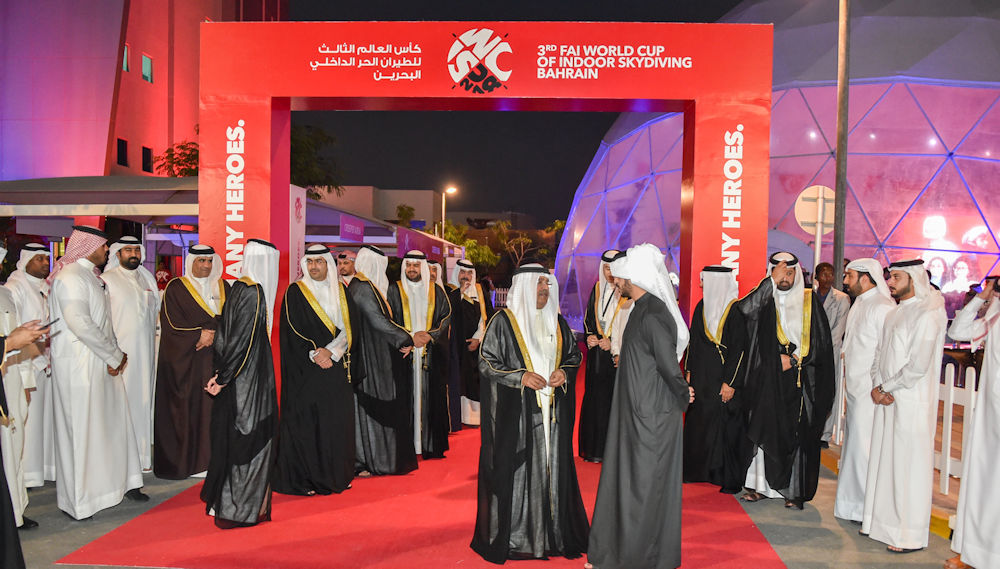 The first of the VIP dignatories took their place on the red carpet, whilst inside the dome, competitors and officials filled the auditorium. By 17.30 hrs the stage was set for the start of the Opening Ceremony signalled by the playing of the national anthem of Bahrain, followed the anthem of the FAI. A recitation of verses from the Quran was followed by a short film about the Kingdom of Bahrain.  A number of short speeches were made, with the Chairman of the Bahrain Airsports Federation, Sh. Salman Bin Abdulla Al Khalifa, starting off proceedings. He was quickly followed by Ms Kwahla Alhammadi, the General Manager of Gravity Indoor Skydiving.  The penultimate speech was made by Mr Ivars Beitans the owner of Aerodium.  Finally Mrs Doris Merz, a Vice President of the IPC confirmed that the Jury had reported their satisfaction with all aspects of the intended competition, and consequently the 3rd FAI World Cup of Indoor Skydiving was go!

Wth that the parade of the competitors/flags began with the host nation Bahrain. The organisers allowed little time for the delegations to dwell on the stage too long, but rapturous applause met those countries with a sole or very few competitors. Theceremony drew to a close with a photo call of all the nations flags, then as the VIPs left the dome, the participants wthdrew to different locations to witness their respective draws.

Jury Notice No. 1 - authorising the start of the Comp is on this website under Documents - click on the link.