Two Norwegian air sport pilots have filled a gap in the market by developing an app which helps new pilots to create and practice their own Air Navigation Race (ANR) routes whilst also helping to bring their sport to a wider audience through helping event organisers and offering live streaming to broadcasters.

The new app, called Air Sports Live Tracking, is a user-friendly system which is designed to help less experienced pilots to create their own detailed navigation routes on their smartphone at a very minimal cost. They can also see others’ flights in different locations around the world, as well as following live competitions and results.

The app was also developed to be media-friendly, and can link with media production to show live streaming of pilots’ races and thus promote competitive air sports. It can be used in conjunction with Flight Contest, making it easy for organisers and providing an exciting overview for audiences watching from around the world.

It all started with a simple idea

The two developers, who presented their system at the General Aviation Commission Plenary last year, explained that they wanted to create a cheap tracking application that would help them, as pilots, to develop their skills.

Financial Consultant Espen Grønstad first dreamed up the project around four years ago, with the simple aim of showing live planes on a map on his smartphone. Joining forces with fellow pilot, Frank Olaf Sem-Jacobsen, a maritime surveillance professional with experience in satellites, gave the project wings.

As Grønstad says, "It was not until I met Frank Olaf with his exceptional knowledge in computer science, that the dream could come true."

The original idea expanded as the pair identified needs and found solutions. The beta 1.0 version was up and running after nine months' intense work in the pair's spare time and with the generous support of app developer CreoIT.com. The app is now helping beginners to practice and improve as well as being used in competition for more advanced pilots, when preparing for races in a new location.

The app, which is downladable from app stores, brings together features onto a smartphone that would normally be used on several different devices, which can expensive. Using Google Earth maps, pilots can design their own ANR or precision flying routes, adding obstacles and gate timings to help them beat their own times and also compare themselves to others using these routes. The drag-and-drop functionality makes it very simple to use, and therefore attractive to those who are less experienced in navigation.

Pilots can use a real life map, decide their speed and provisional route and add minute marks and turning points, whether participating in a corridor race, position race, or rally. This means they can arrive at the airfield well prepared, and will have less need to rely on others for planning. Another useful feature is that start times are adaptive, ie. commencing at ‘time zero’ meaning that the times for each gate will automatically update once the pilot has started the route.

Although the system was designed to comply with FAI rules for the tasks, one obvious challenge for the team was that for larger competitions, smartphones are not permitted during the actual flights. This could easily be overcome by providing pilots with a basic smartphone containing only this app, because no further hardware is required. The slight delay from using mobile phone technology is minimal but can be overcome by opting for an artificial delay for races.

The app can integrate with the widely-used ‘Flight Contest’ as an add-on, which helps organisers with registration and pilots to manage their crew.

Events can also be organised on a small/local scale quite easily, with no logger or extra software required. Organisers can create a competition on the website, with track, gates, prohibited areas, penalty areas and information boxes. The system generates a flight order automatically, including maps and images. The pilot simply needs to download the app, print the flight order, and take off.

On this shared platform, users can also view live scoring and follow the other pilots, something that has been used with success by the NRK, the Norwegian National Television Company, who used pilots’ livestream video feed in the 2020 Norwegian Championship in Precision Flying, hosted by the Norwegian Air Sports Federation (NLF) to transmit live pilot tracking to viewers.

This was the first time that the Norwegian television company had followed the full length of an air sports competition, and unsurprisingly, Grønstad and Sem-Jacobsen are excited about the possibilities for bringing their beloved sport to a wider audience, commenting: “The sport has to develop to get new people involved.”

Inspired by other televised sporting competitions such as skiing, they realise that TV has changed sport, with media needs changing the way contests are run and shown to a live and television audience. With the app’s live stream, the timing gates can be shown with the results panel displaying whether the current pilot is ahead or behind the leader. This makes for a more exciting televised race which is great news for broadcasters. The ‘danger zones’ in a rally can also be viewed live, including the penalties.

Designed as a modular system, Air Sports Live Tracking can work alongside other systems allowing event organisers and broadcasters to be creative with the way the app is used.

The app integrates with Microsoft Flight Simulator 2020 which allows pilots to fly together ‘live’ from across the globe. Grønstad remarks that this is particularly useful in Norway during the winter when real flight conditions are limited!

Another interesting concept could be virtual global competitions, either alongside live events, or even as a stand-alone idea. 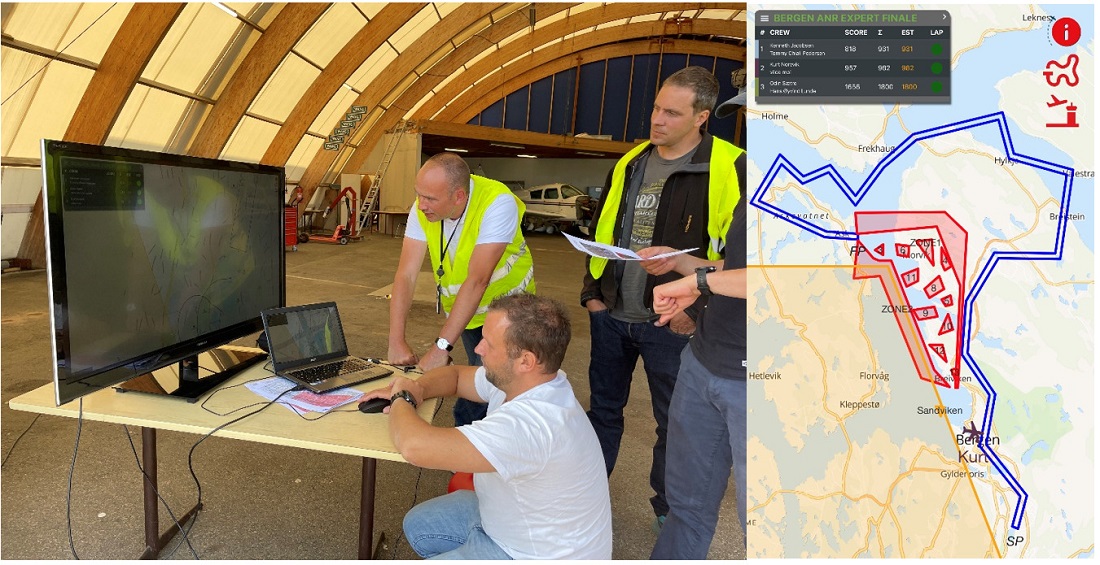 Following the finale at a local competition in Bergen. Photo: Espen Grønstad

What does the future hold?

Reception has been very positive so far, with pilots, event organisers and broadcasters all appreciating the app’s functionality. The duo are continuing with testing at events and monitoring performance for pilots and broadcasters.

The app's development was funded by the pair, whose future objective is to make it cost sustainable. Servers to host competitions are the main draw on the pair’s finances, although some financial help has been made available, from the Norwegian Air Sports Association, and sponsorship opportunities could be developed for events using the application. The pair included a small subscription fee of just €9 per year for pilots, to maintain its use and to cover sudden volume causing a server to overload.

“Congratulations to the Air Sports Live Tracking team for their hard work in developing this new technology. We at GAC are excited about the potential for this application which will enable pilots of all levels to improve their skills, as well as helping organisers and media to promote air sports.”