With 16,000 pilots from 73 nations scored in 2020 despite the pandemic, the CIVL World Online XC Contest (WXC) is an amazing success. Meet Andreas Rieck, the man behind the scenes who, for many years, has been running the WXC.

You are the key person to run the CIVL WXC and IGC validation server. We are very grateful for your work and thank you for the time you have dedicated to the development of our sports. There is a saying: ‘People should know their heroes.’ So if you do not mind, we would like to introduce you to the global community. What is your education, your job?

Originally, I have studied Radio Electronics (mil. aviation). Since 1993, I have been working within the IT world with companies like Sun Microsystems and Oracle. Presently, I am a Senior Technical Analyst for Drive Lock SE, a security software.
I’m also a paragliding instructor working most of the time at SIV courses in Austria. SIV stands for Simulation des Incidents en Vol : simulation of inflight incidents. I also run my own little school for online learning since 2018: it is a consulting company for other schools that want to implement online learning in virtual classes.

We know you are a very good paragliding pilot who used to be in the world top 300 pilots, but the last decade you have not been competing actively.

Yes, you are right. I stopped competition activity after an accident I had as an Air Marshal during the 2007 World Championship in Manilla, Australia. A gyrocopter used by the press was involved. For now, I would rather say, I am in ‘Pause’ mode, not stopped :-).

Tell us about the creation of WXC. When it has begun? When the first Online XC contest appeared? When they were united under WXC?

The German-based team around Reiner Rose, Dr Hans Trautenberg (who was a member of the FAI International Gliding Commission, IGC) and some other developers started in 1998 to develop a platform for sailplane pilots.

Then, in 2003, the Hang gliding/Paragliding World Online Contest started in Germany under the DHV responsibility. It was published on the www.onlinecontest.org platform, that’s why the well-known acronym is still OLC. It was – and still is – a purely private and non-profit organisation. I’m really happy that the original OLC has, since 2014, the status of International Affiliate Member of the FAI/IGC. A great progress.
Sadly, in 2006, the use of the wording DHV OLC World Contest created a political issue for the DHV at CIVL level. Such ‘World’ status could be run only under the FAI umbrella where all nations are together and not just by one single national aeroclubs or delegated federations – we call them NACs – ,or by one single platform provider.

At the same time, the owners of OLC decided to develop the next Java-based online contest platform, OLC 2.0, without the previous volunteer developers like myself. I got an offer, but I had to sign an official contract which was not possible for me as an employee. So there was a need to find another open-to-volunteer concept which would make, hopefully, every nation and the CIVL happy.
In early 2007, I discussed with the CIVL officials the idea of a centralised scoring server with fewer features, just scoring. The idea was to connect all national servers or contest providers to a single system, score their national championship flights and advertise the national contests as much as possible. We started building the WXC in October 2007 and its first season was 2008, so you can say that 2008 celebrates the birth of WXC.

Whom would you like to mention as contributors to the WXC project?

Without its contributors, the WXC would not run as it is today. So special thanks to John Stevenson (GBR) for the Validation Server (http://vali.fai-civl.org/), Prof. Marcin Kostur (POL) and Christian Hynek (AUT) for the WXC code, Dr Hans Trautenberg (GER) for the optimisation code.
We can add Aljosa Coh (SLO), already contributing with a new code for the next generation WXC. Aljosa is running the xcglobe.com platform, with some national contests. He is one of the most helpful people for the latest activities. For example, he implemented the FAI-Badges/Diploma verification at XCGlobe, which was a development task I had before for WXC. So it’s done at XCGlobe, which syncs the flights to WXC each night.

Tell us about the basic principles of the WXC operation.

The WXC is a world online cross-country contest for pilots of the world. The WXC is a network of online contests servers around the world. Pilots participating in a national WXC-networked contest will have their flights automatically claimed to the WXC if they applied for a unique CIVL ID in the WPRS System.
Scoring flights are based on information documented by flight recorders. A flight recorder can be a flight instrument with a GPS and pressure sensor, but also an approved smartphone app.
Today we score a so-called free flight, which is a free distance which does not conform to the triangle track specification with 1.00 point for 1 km.
We automatically score a flat triangle. A triangle is any triangle which does not conform FAI triangle specification. It gets 1.20 points for 1 km.
And we score the FAI triangle, which is a triangle conforming to the FAI definition, with 1.40 points for 1 km.

The WXC season runs from October 1 to September 30. We add the best 6 flights in 7 categories. The results are published on the CIVL website, on the WXC server and eventually on national XC servers.

The list of official national servers is published here: http://wxc.fai.org/module.php?id=1

But participating nations are not limited to this list. For example, in 2020 about sixteen thousand pilots from seventy-three nations took part in WXC.

Are there any tendencies of the WXC that you noticed and would like to point out?

WXC is growing together with free flight sports. Every year we register almost one thousand more competitors. This is a good tendency.

Do you have a WXC support team or do you work alone?

Today, support is just me, but the flights are to be approved by national XC supervisors. This is the reason why it is important to understand the WXC not just as a FAI Server, but also as a Worldwide National Admin team and Server Network. NACs run their own contest, approve flights, check if everything is OK, and forward the approved flights to WXC. I wish I could have more contact with the national administrators, but the truth is that the pilots often prefer to contact me directly instead.

Who are the national XC supervisors, what are their functions?

If some nation wants to join, what shall they do?

A nation should have a national contest up and running.
If it is a well-known platform like XCglobe.com the platform admin (developer) will contact me to implement the sync (support ticket).If it is a Leonardo XC System, most of the time the national administrators or developer contact me and ask.
In the early days, there was an agreement to be signed between the CIVL President and the NAC/Federation, but we don’t do this anymore. It is not needed. As long as we stay in contact and have contact data, we are able to help each other.

What are the minimum requirements for a flight? Can a beginner participate?

There are no minimum requirements other than the ones imposed by the concerned NAC and, yes, a beginner can participate. It only depends on national rules if a flight is forwarded to WXC or not. WXC doesn’t look into licenses, we trust what the National XC supervisors and national servers are sending us.

What advice can you give to the participants, what is the most common WXC issue?

Too easy.
#1 – Read the rules and fly with friends (the friends will help).Reading the rules is also a question of knowing the local law about data privacy and so on. So the pilot should read the rules.
#2 – Know the contact to your NAC/Federation and national contest owner/team to get technical help when your friends don’t have an idea.

The most common question from pilots is this one: ‘My flight is seen on my national server, but not on the WXC. Why?’The answer is: The national server did not send the flight to WXC and the pilot was not informed. Most of the time, it is an airspace violation that has been detected but, curiously, the flight was scored. Or it could be a flight made during the Covid-19 lockdown, also curiously accepted by the local server. In such cases, the flights were not forwarded to WXC without the pilot being informed. Still, they might be scored locally.

Is it possible that one pilot submits his flight on two (or more) different sources and he is accepted for WXC on one and not accepted on the other?

This is a question of national rules. If, for example, Australia allows or accept two different official national XC championships, yes, technically the WXC can sync from two different sources.
To avoid duplicating flights at WXC, the NAC must decide which is the preferred platform.
The WXC platform will also double-check if the same pilot already submitted a flight at the same time and takeoff and simply reject the duplicating flight from another source.
To be honest, NACs will never run two different official championships in parallel.

The table at http://wxc.fai.org/module.php?id=1 will show you nations with back up servers or when pilots (for example in Italy) must submit international flights at another server to be scored at WXC. How the WXC will get the flights from which source is simply based on the national online contest rules.

If I were in the position of a NAC’s official, I would never allow two National XC contests. If a pilot is doing an airspace violation, you probably can check, remove, penalise only within your main/official national contest. Allowing another server to forward flights for the same pilot undermines the decisions of national XC supervisors.
It would be like having two different  Cat 2 competitions on the same take-off and allowing the pilot to attend both and double his WPRS points. It can’t be possible, this is not a real question for sure!

What are the biggest problems when cooperating with national XC contests? Do national XC supervisors work properly? Are there any problems you would like to be solved internationally?

It is too bad that we never got the World Xcontest on board of WXC networks: they are not sharing their World Xcontest flights. The issue seems to be similar to the onlinecontest.org platform: no interest. I can only assume that large contest providers are anxious about losing attractiveness when the WXC is already providing too many nice features and when the WXC would have a complete database of flights.

We are missing many national servers of countries like Portugal, Spain, United Kingdom, Slovakia, Canada, USA, Russia, China, Japan… Why are they not with us?

CIVL should clarify the situation and publish a list of recognised national XC networks: who is already participating; who is planning to participate; who is not interested; who are the contacts. In this way, we would all know who wants or does not want to be part of the family.

This would help the pilots to know if, somehow, they have a chance to compete in the WXC. It would encourage them to lobby their NAC so a national XC Online Contest is set and participates in the WXC.

The CIVL Plenaries could get involved. Participation and results could be reviewed. Delegates could share their plans for development.

And maybe we could find a way to involve the WXC in the WPRS?

As long as I can volunteer, I will try to keep the WXC as simple as possible. It’s just about scoring, very much like the WPRS. The next WXC version will be even more simple, but its launch will still take a long time.

Thank you, Andreas, for all your work! 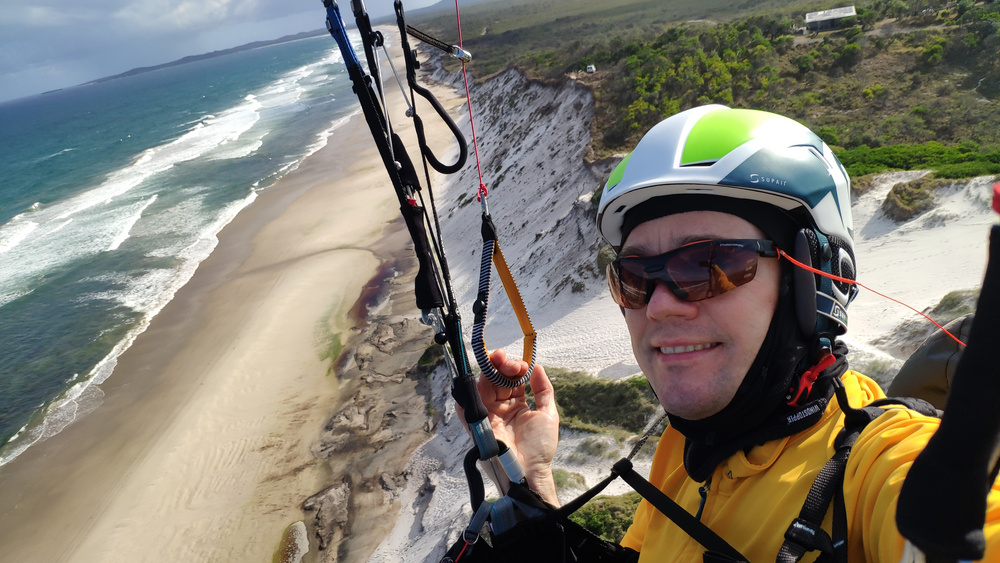