German pilot Isabell Maus participated in the Rio Grande Balloon Camp organised by the Balloon Federation of America, and supported by the FAI Ballooning Commission (CIA). Here is her story:

Before I start telling you readers about my days in the Rio Grande Balloon Camp, I have to say that I really appreciated that week in the camp a lot and I would like to express a big big thank you to everybody who made this possible – the sponsors, from BFA to FAI, Cameron US, the Rainbow Riders, and many many others, who were really generous to us, the organization team that did a great job to arrange for whatever was required for us to make the camp a success such as it was, the pilots who spent their time teaching us and were always patient and friendly while we were asking lots of questions. It was an awesome experience to be part of such a camp, especially as I was the only foreigner, but never felt like that. Such memories are likely to be told to my grandchildren once I am old. 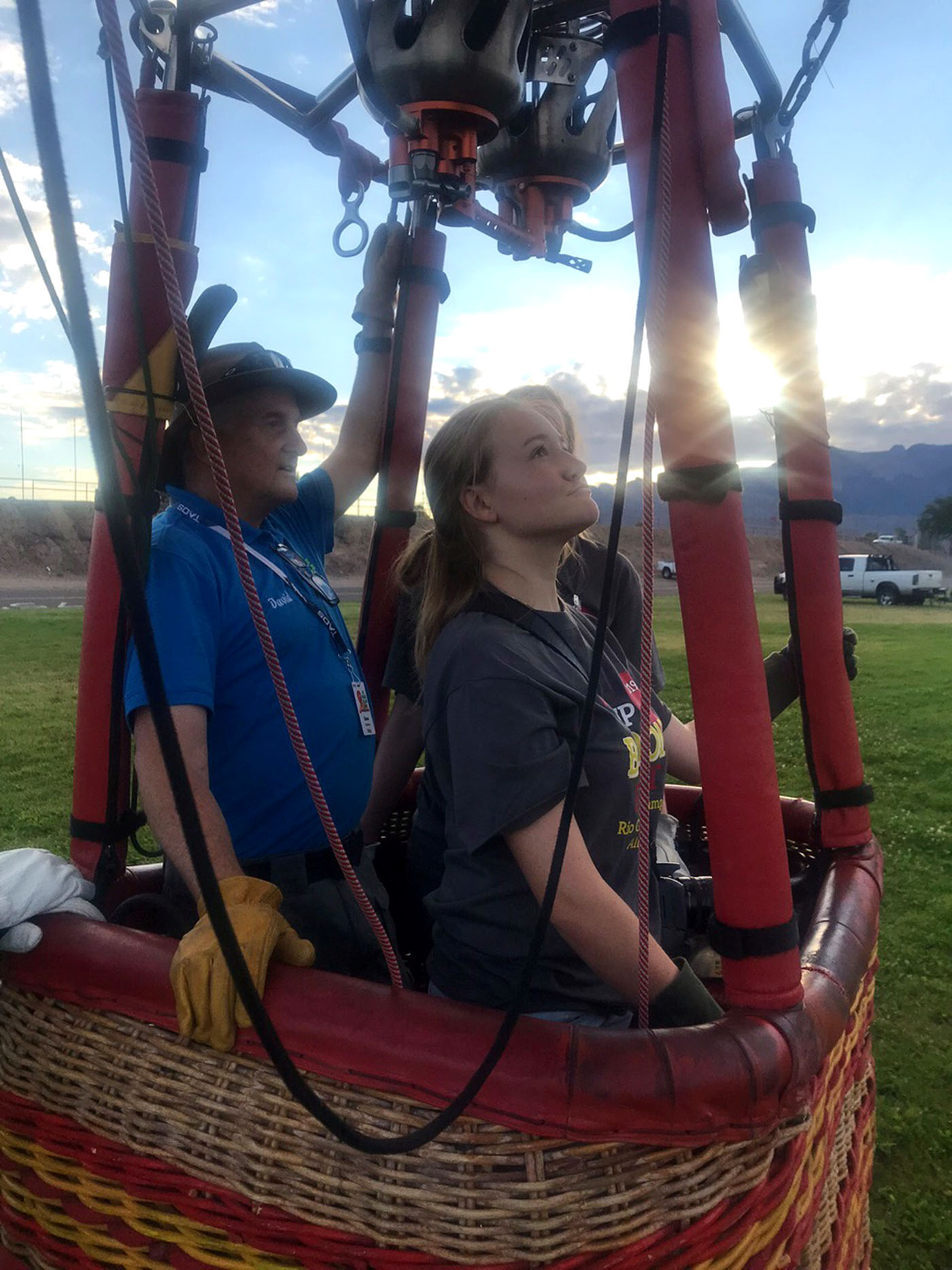 That is one of the fascinating qualities of ballooning: the balloon family spreads worldwide and hugs its children!

The first day, being a Saturday, was already very nice. I immediately felt at home in the dorms as the staff and counsellors were all very kind and welcoming. After getting to know the other camp members that came from different parts of the US, and learning some basics on Crew Safety and First Aid, we got split up into teams and then went out to the parking lot where several pilots and their baskets were waiting for us. The baskets were all different systems, such as Cameron, Firefly, Lindstrand and Kubiček. We learned about how the different systems work, what the requirements for flying with each one of those systems are and therefore also already got to know the pilots who were going to be flying with us all week. In the evening we had our very first weather briefing. 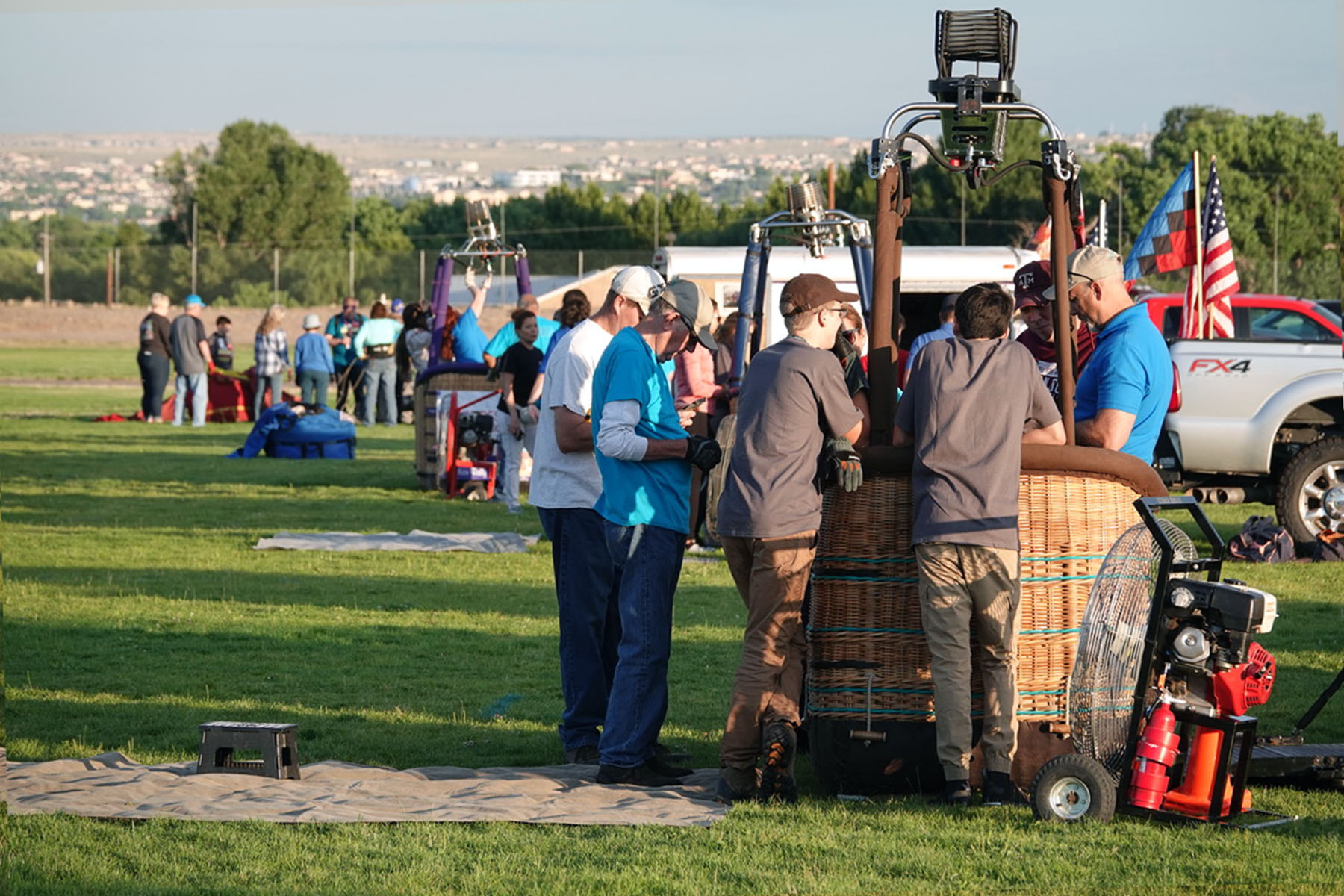 The next morning the counsellors woke us up at 4:30 like they were going to all week, which was quite something to get used to for most of us. After the morning briefing we headed up to the Fiesta Field in the Rainbow Ryders Vans to get to know our pilot for the day and fly with him. Our flight was awesome and since I’m from Germany and have never been to The States before, it was overwhelming! I had a beautiful view over the landscape of Albuquerque which is more than just a bit different from the one of my hometown. Both I and my teammate got burner time and our pilot explained more things about his balloon, showing us exactly what he was doing and why and also always being open for questions. After we were “gently set back into the loving hands of mother earth”, as the Balloonists’ Prayer says, we packed up the balloon and drove back to Fiesta Field where we were tailgating for breakfast. Of course all the campers had a lot to tell each other about how everyone’s flight was and so the air was full of laughter and chatter. Afterwards we walked over to the Balloon Museum where we spent the afternoon attending classes on Aeronautical Decision Making, weather and online resources. In the evening we started making tissue paper balloons that we were going to launch on Thursday.

On Monday after flying and tailgating we went to the museum once again, first to do a scavenger hunt, including a baggie toss contest, and look around the museum, later to attend some more classes such as Gas Ballooning and Competition Flying. In the evening we finished the paper tissue balloons and played some games that required teamwork, to make us get to know each other better and to learn how to work as a team by including everyone’s ideas and not leaving anyone behind. That is also an important lesson because ballooning is a team sport; you cannot fly a balloon all by yourself since you need a chasing team and your crew on the ground. You also need to listen to their opinions on certain things and consider their ideas and suggestions. 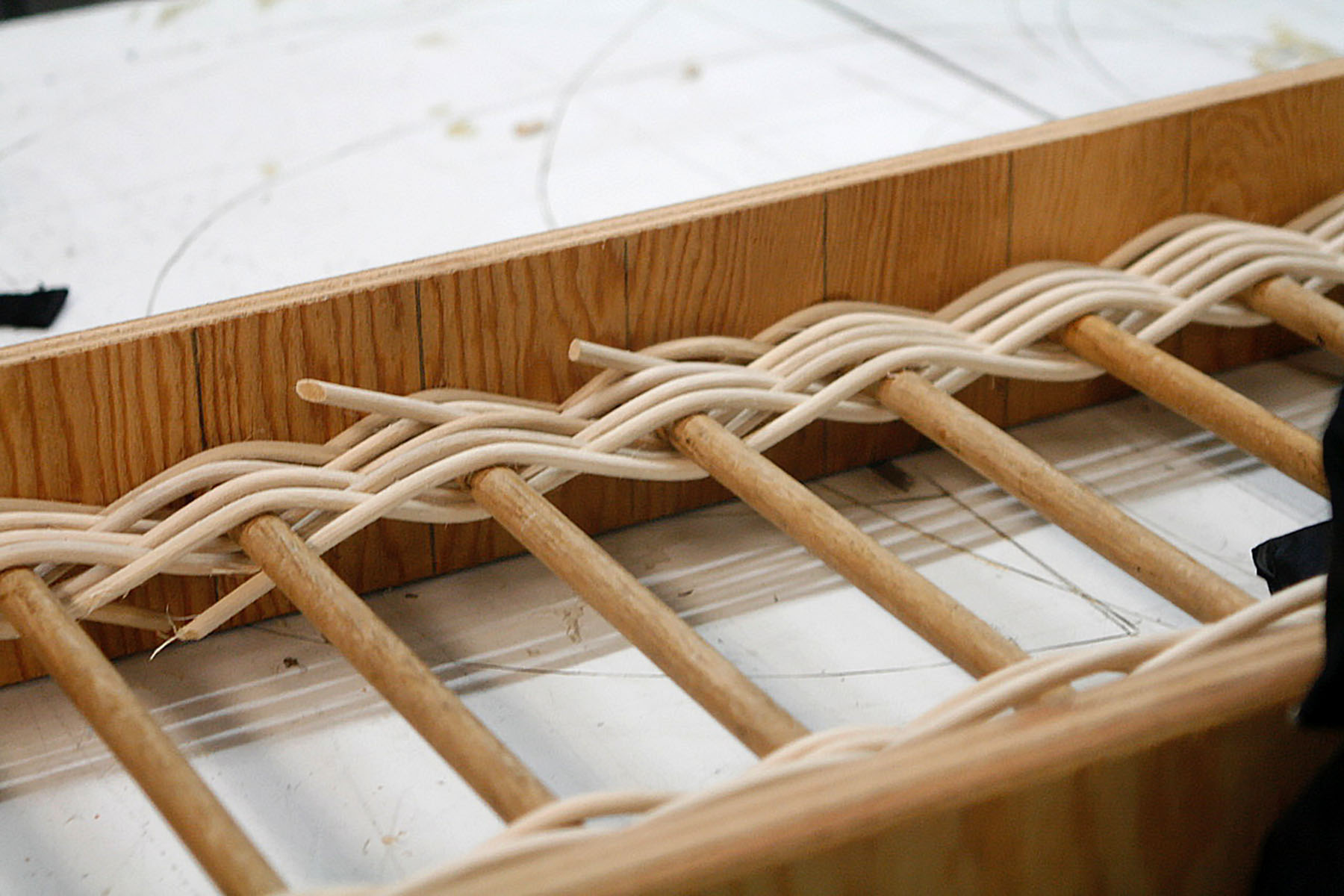 Tuesday we spent the afternoon at AERCO where we first did a fire extinguishing training. Obviously it’s very important to know how to use a fire extinguisher since we’re working with propane and fire all the time. Afterwards we learned a few things on balloon repairing and maintenance, including wicker weaving and sewing an envelope. We also had lunch there and I discovered the so-called “floats”, the mix of ice cream and soda. Since we don’t have them back in Germany, they were something entirely new for me.

Wednesday was a very exciting day for all of us because we were on Live Television with Steve Stucker from KOB-TV. Also, the livestream was on the internet so we knew our families would be watching as well. We didn’t fly that day but we were doing tethers on the field and he walked around, interviewed some of us specifically and also talked to us behind the camera. Later that day we drove to the ATC (Air Traffic Control Centre) and they showed us many interesting things on how they coordinate all the planes. One screen showed a world map with all the planes currently flying around and it’s quite bizarre to see just how many there really are. After the ATC we drove to Rainbow Ryders, the owners of our vans, to talk about propane safety and safe refuelling. They explained the inside of the propane tanks to us and we were all allowed to watch them refuel. We also got to climb into one of their big baskets for around 14 people and it’s quite impressive. When we got back to the dorms that evening we played a very fun game called “Stupid pilot tricks”. Just like on the first day for basket search, several pilots were waiting for us in the parking lot where they had set up their balloons. Just except this time they made some mistakes that would have a huge impact on the balloon if you were to really fly with it like that. So it was the campers’ job to find these mistakes and correct them. Some pilots really made such hilarious mistakes, like a propane bottle instead of the fire extinguisher, or the burner upside down in the “winter style”, meaning it would warm the passengers and the pilot “just a little” on a cold winter day. Overall you can say that the pilots made a great effort and figured out interesting ways to make even the smallest mistakes for us to notice and remember, hopefully resulting in us not making the same mistakes when we crew and fly. 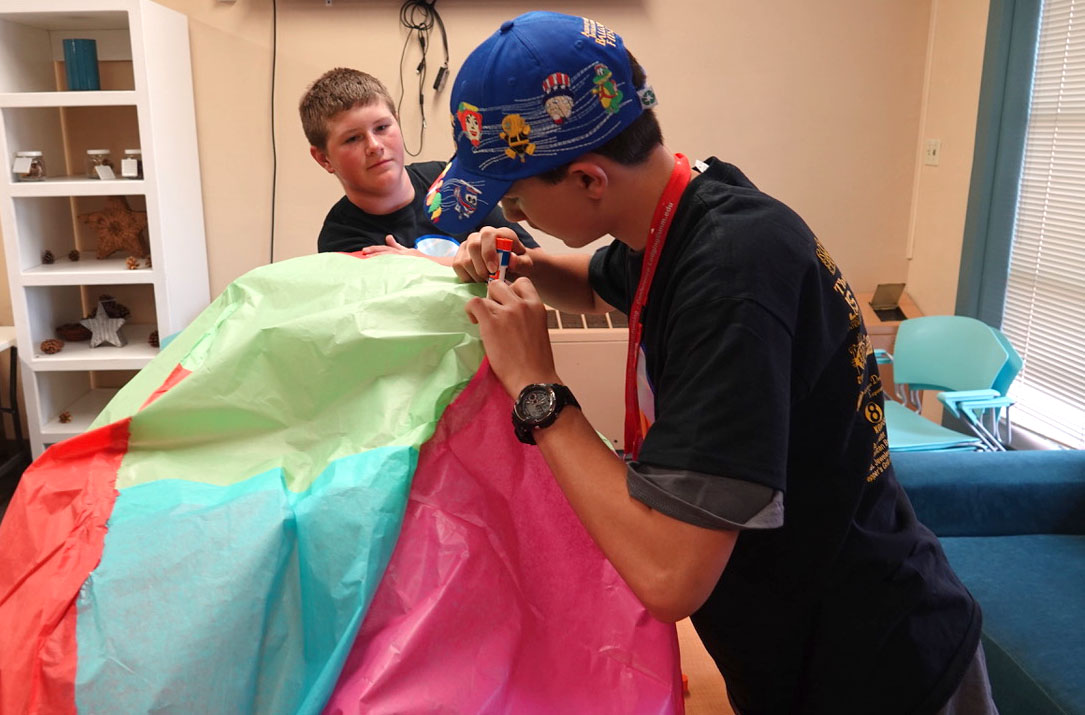 On Thursday morning everyone seemed a little sad or melancholic, considering that this was already the last day of camp. We did some flights and some tethers that day and some of the local campers had their families come over to watch. After tailgating, we launched our paper tissue balloons, which was a lot of fun and beautiful to watch how the colourful balloons rose up into the air. Of course we were competing with one another, each team trying to make their balloon fly as far as possible to win our little “race”. After having cleaned out our rooms and checked out, we went to the Museum where we had the closing ceremony and several people and teams getting awards. We campers had picked Disney villains for our assigned team leaders that reminded us of them and they picked Disney stars for us. It was a lot of fun to see who they thought would match which Disney star and also to see their reaction when they found out which villain they were. As soon as that part of the ceremony was over, we all went out on the balcony and we campers had to kneel down. In front of us was a cup of grape juice and on the opposite side were standing our counsellors and team leaders. Then someone told the story of the brothers Montgolfier, who started ballooning by observing how the paper of a burning paper factory was gently flying up into the air. Then the Balloonists’ Prayer was said and we had to try and drink the juice without using our hands. Being entirely focused on the task at hand, we didn’t pay much attention to the team leaders and all of a sudden they were spraying water all over us until we were soaked. Then we were allowed to get up and hug them, and we did, and everyone else did too and nobody really wanted to leave the camp, because we all had such an awesome time together.

We all hope that one day we will all meet again at Albuquerque Balloon Fiesta – maybe some of us as pilots, who knows?

Top picture: One day soon one or more of these campers may be on the field at Balloon fiesta Park as participating pilots !