On claiming a record of 457 km distance to goal, Marcella Uchoa: I just counted days to be there

FAI has received the Paragliding both World and South American record claims of 457 km Straight distance to a declared goal - Brazilian pilot - Marcella Pomarico Uchoa - flew in Brazil on October 14, 2022. Marcella already set this record back in 2018 of 377 km but later in 2019  it was superseded by Seiko Fukuoka (France) raising  the limit up to 451 km. Back in 2018 Marcella also set records of 410 and 412 km for Straight distance and Distance using 3 turnpoints that were also superseded by Seiko. This year she has set up her mind of bringing one of the distance records back to Brazil.

Marcella has been flying for over 12 years now. Interestingly, initially, she dreamt of being a skydiver but the free flight won her over. We asked Marcella to tell us some more details about the life and record-breaking flight.

-    Where did you learn to fly?
-    I learned to fly in my hometown, Pocos de Caldas, Minas Gerais, Brazil. My instructor was Rafael Carvalho from the Club Pocoscaldense de Voo Livre.

-    Who inspired you in your flying career?
-    Back in 2010 I met Kamira Pereira, a Brazilian who had the world record back then and told me about flying in Sertao. Since then, I was amazed by those big flights and dreaming about one day being able to cross the whole Sertao flying. I also love competitions, so I have many people that inspires me nowadays, especially Meryl Delferriere who is a great pilot and person. Also my Brazilian friends who helped me and taught me so much since my beginning, Cristiano Ricci, Walter Oliveira, Rafael Barros, Marcelo Prieto, Frank Brown, among others.

-    Why did you decide to break that very record in that very place?
-    It is well known that Brazilian Sertao is the best place in the world to make long-distance flights and to chase World Records. It’s been six years that I am going to Sertao chasing records. I just love that place and everything about it. Especially the people in Sertao are the best! No matter where you land, people come to help you out, offering food, water, their home, and everything to make you comfortable. That reception and affection make this whole experience even more thrilling.
It’s been 2 years that I am going to Caico, Rio Grande do Norte, with ‘Fly with Andy’ team, and I just love the place and the whole team, as I feel extremely safe with their towing and retrieves, making me worry only with the flight.

-    What is the previous record and where?
-    The previous Female Straight Distance to a Declared Goal was from Seiko of 451,5km, in Assu, Rio Grande do Norte.

-    What flying conditions make your record different from the previous one?
-    My previous record of declared goal was of 377km in Assu, RN. Making such a far-away declared goal was a big challenge for me, and we have to force ourselves sometimes to keep on track.

-    How long have you been flying in this area?
-    It has been six years since I am going to Sertao every year. I cannot spend one year without going. Actually, I count the days to be there.

-    What was your preparation to start making record attempts?
-    After finishing my Master's degree in Marine Biology, I decided to dedicate my whole life to flying, as I already had this big dream of the world record and I knew it wouldn’t be easy. So I start flying in stronger places, making as many hours as I could, evolving in the sport to be able to get a D-glider. And finally, in 2017, I went for the first time to Sertao. In that year I was able to fly 362km until sunset, conquering the female Brazilian record. And in 2018, my dream came true when I broke 3 world records, flying over 411km.

-    How many failed attempts have you made before you set this record?
-    I cannot even count! Too many! Since 2018, I have been trying to break those records again (Female straight distance, straight distance to a declared goal and free distance using up to 3 turn points). So I have lost count of how many forms of declared goal I have already filled it up.

-    Any special activity to get ready for record-breaking flight?
-    My preparation this year was mainly focused in participating in as many competitions I could. So I went to 3 PWCs rounds (Colombia, Brazil and Romania), to both Brazilian Championship rounds and some regional competitions.

-    Have you launched alone or in the company? How far have your companions managed to fly?
-    My boyfriend Rafael Barros launched with me and we managed to fly the whole flight together. 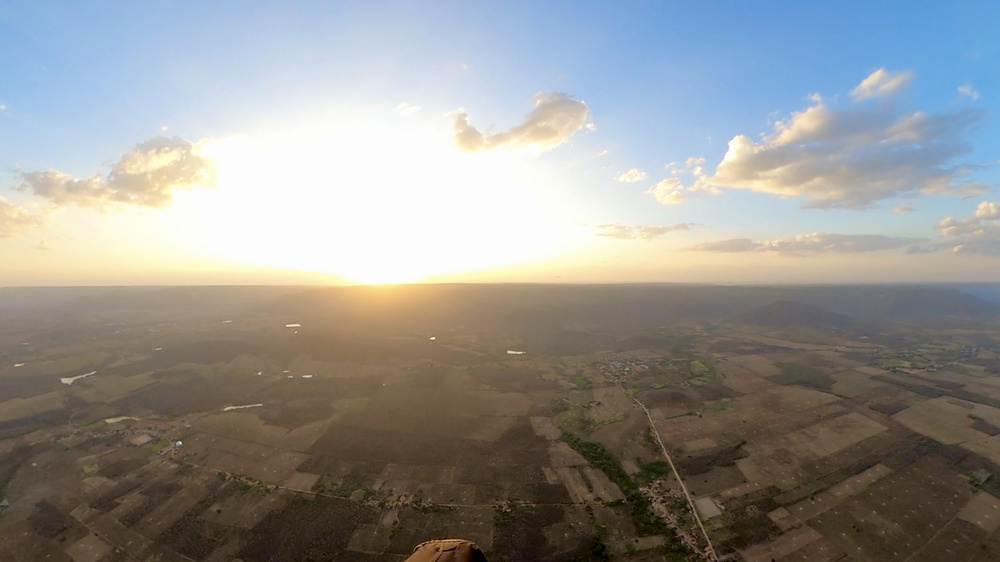 -    Tell us about the flight, launch method, your speed, wind speed, thermal strength (from-to), lowest point, and highest point.
-    The link to the flight https://www.xcontest.org/world/en/flights/detail:marcella.uchoa/14.10.2022/09:53. I launched winch-towing in Caico airport. Our average speed was very high in the first 200km, after that the wind dropped a lot to 10km/h at some points.
Particularly, I really like the straight distance to a declared goal record, because it's like a giant race to goal task and super challenging. For those who don't know, in this type of record, you have to declare a point (geographical coordinate) before taking off. So, I always fill out the form the night before. I love looking at the forecasts and trying to figure out what is the point I'm going to hit after crossing the entire sertão. Then you take off and look at the instrument where it says "distance to goal" and see 457km and that you have to climb more than 45000m! What a challenge! And the forecast isn't always right, so during the route, you have to decide if it's worth trying the declared or not. I wanted to declare 477, but as this year was not very good, I decided to lower it a little bit and put the point before the plateau of Piauí, with 457.77 km. And it was just like a race to goal task. When we were 28km to goal, we were 1400m off the ground, I thought we were going to reach the point on the limit. But we got a good line and arrived with 400m on the declared point. It was really cool to plan this final glide as if it was an arrival to Goal, and what a task! Almost 11 hours of flight tearing through the sky of our wonderful sertão, taking off at 6:56 am from Caicó in Rio Grande do Norte, crossing the entire Ceará and landing on the border with Piauí at 17:39!! Taking off with the sun at your back and making the final glide towards the sunset. This is so magical to me.

-    What was the most tricky thing in breaking this record? What was the most difficult part of the flight? Was there a moment when you were ready to give up?
-    It was an extremely challenging flight for me from the beginning. I wrongly put a lot of weight behind the harness and it laid down a lot, so I had to keep pushing forward, very uncomfortable. In addition, the flight was crazy turbulent, my paraglider did not stop over my head, and I thought several times "what am I doing here?". And in the end, around 350km, I got very low in a bad place, in the middle of some mountains and without landing zones, at that point I thought I would bomb out and lost the flight, so it was a mental challenge to fight against my mind to not give up. Anyway, only I know what I went through during those 10 hours of flight to have 1 hour, in the end, to relax and enjoy the moment. But that's what is about it, challenge, resilience, never giving up, and never stop believing. And I am super happy to bring this record back to Brazil!

-    What were you eating and drinking during the flight?
-    I ate two boiled eggs and a candy bar and drank a lot of water.

-    How did you celebrate the record? Who was the first to congratulate you?
-    We celebrated with all the pilots who went far that day and spent the night in Santa Quiteria. But it was not a proper celebration as we were super tired from the flight. The first to congratulate me was my brother who lives in USA and was following me on the livetracking all day long, and when I broke the record, he called me up and as we arrive high at the point, I was able to answer his video call and celebrate this moment together. It was a very special and emotional moment for me. 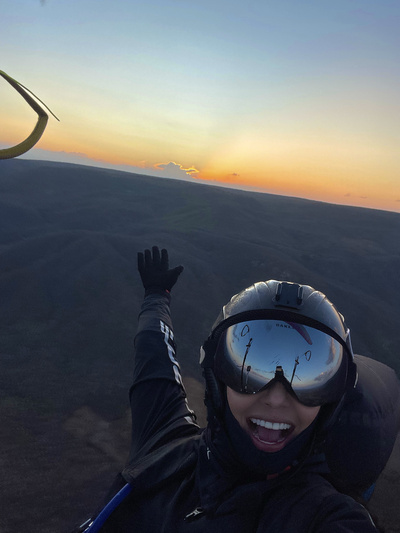 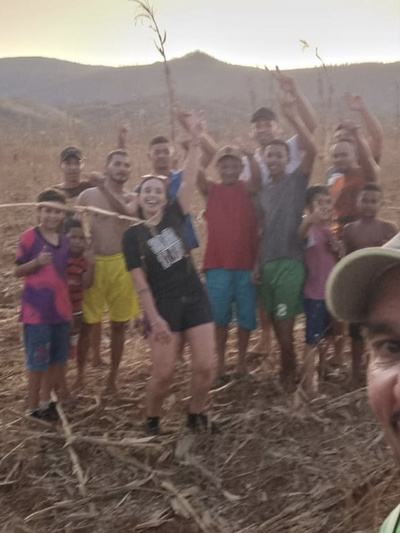 -    What is your next goal to achieve?
-    First off, I really want to break the 500km barrier, it always has been a dream to fly over 500km. Then, I want to break other records, as the female straight distance and the free distance using up to 3 turn points.

-    Any advice to pilots, or some share of experience that you gained while breaking this record?
-    I guess I would say if you have a dream, no matter how big and impossible it seems to be, if you do believe from your heart, and work really hard, you can achieve it! So never give up and never stop believing.