Another early morning start for the Competitors who wanted to ensure they made it early to Manifest to register for the last chance for Practice Jumps before the formal Opening Ceremony this afternoon and the actual start of the Competition.  The first of the aircraft (2 Twin Otters) arrived at 9.30 and within minutes was airborne with the first load of the day.

Meanwhile the Judges had arrived at the Pond for their briefing before they took up their positions, also to practice for the Speed round.  The course is set up with all three disciplines available for the Practice Jumps.  Manifest advised those who wanted to run the Speed Course to speak to the Judges to know what they scored.  In fact the course is set up with 4 actual practice areas with the accuracy course marked at both ends.

Not only the Competitors and the Judges have prepared to practice, also the scoring system has been set up and will supply live judging results on the DZ - which we will try and represent with regular updates of the Results page - click on the menu link at the top of the page or on the results site : www.ipc-wcresults.org.uk 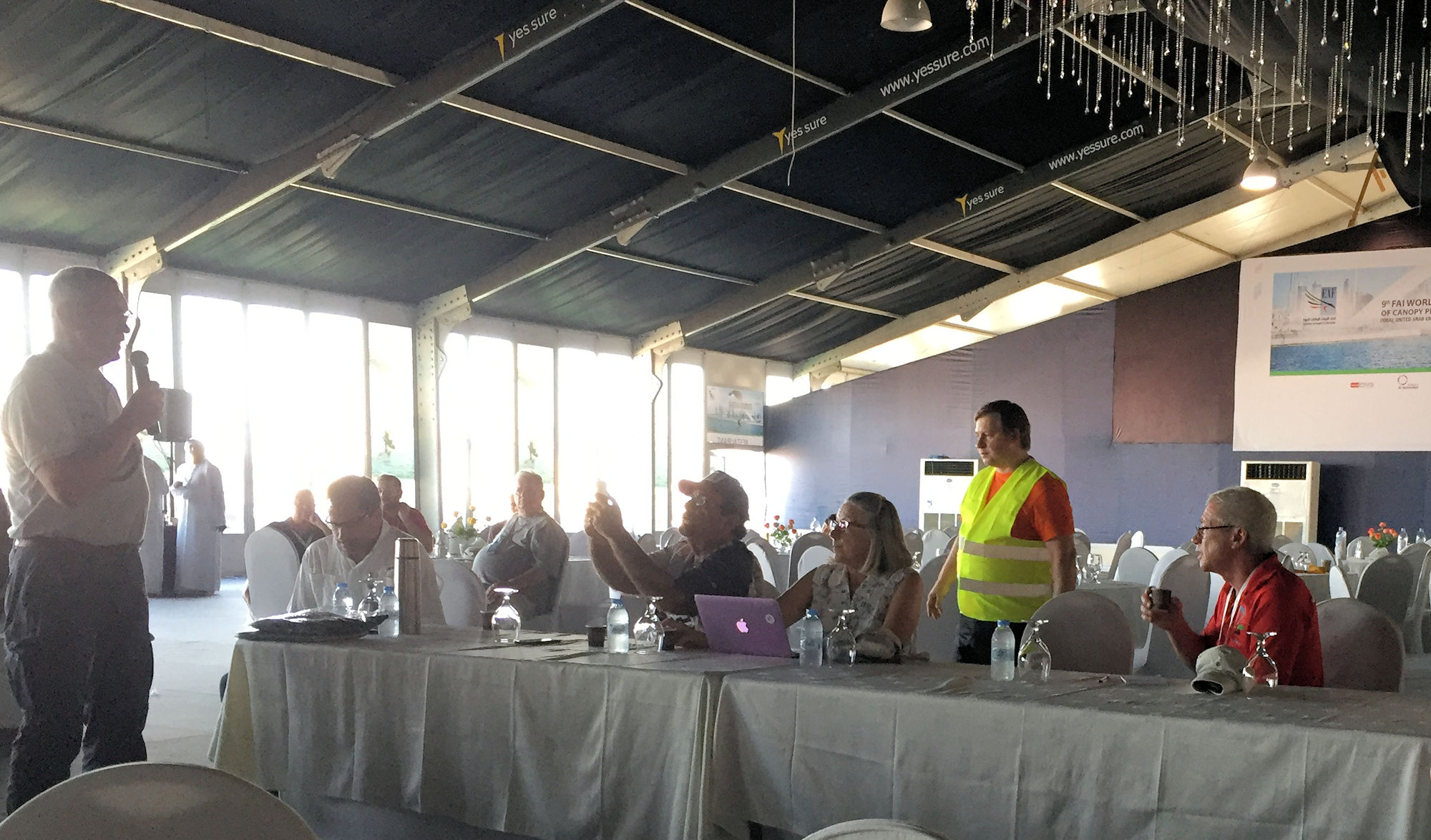 The meeting was conducted in the dining tent and was led by our Deputy Meet Director, Helmut Schlect who started by introducing HE Yousif Hassan Al Hammadi, Director of the Organising Committee, who took the opportunity to welcome the Competitors, Judges and everyone involved in the organisation of this First Category Event.    He welcomed those who were returning to Dubai and said this was his happiest times being involved in such a thrilling discipline - and wished everyone a good and safe competition.  Once the introductions were complete, Helmut took the opportunity to dispell some of the rumours that have been going around the DZ by clarifying the position with the change of venue and the arrangement reached with Skydive Dubai to prioritise the competition between the hours of 7.30 and 11.00 on each competition day.  This should mean 3 jumps per competitor per day.  For the first two days of competition the weather forecast was good with lowish winds of about 3 m/s average (go away Murphy!)!

So the revised schedule would be published this evening as normal, but at the moment the bus will leave the Ibis Styles Hotel, Dragon Mart at 5.45 for the DZ with first call at 7.05 for a 7.30 first aircraft.  The decision as to which task to start with will be made in the morning following the weather check and in consultation with the Chief Judge.  Craig Bennet, the Chief Judge then introduced himself and his panel of Judges and told the competitors that any decisions he made during the competition would be based solely on his concern for safety.  Bjorn Korth then took the microphone and called competitors, in their loads, to the various Judges positioned in the room to hand out helmet numbers and to agree the exit order.

We were then treated to the Opening Ceremony which combined the traditional dances of this part of Arabia with a modern display of flight from jumpers who carried the flags of the FAI and UAE into the arena and competition - paramotors smoke and flag display - an amazing display of model aircraft (helicopter) flying and rounded off the ceremony with the incredible flying of Zoltan and his aerobatic flying.  The Competitors from 25 countries (China did have one representative, but no team) marched into arena behind a young lady with the nation's name on a board, carrying their national flag and wearing their team uniform (if they had one).   It is a justifiably proud moment for each competitor to enter the arena of a World class competition behind their national flag.

Early start  in the morning - publication of the pictures from the Opening Ceremony will be done tomorrow.

Have a restful evening, good luck and all the best for the competition!