Dawn breaks over Dubai on a perfect morning - everyone arrived at the Drop Zone early.  Today is a public holiday in Dubai and there was no traffic on the way in this morning.  Perfect conditions awaited all the competitors as we started the first round of Zone Accuracy with the first lift at 7.30 am. 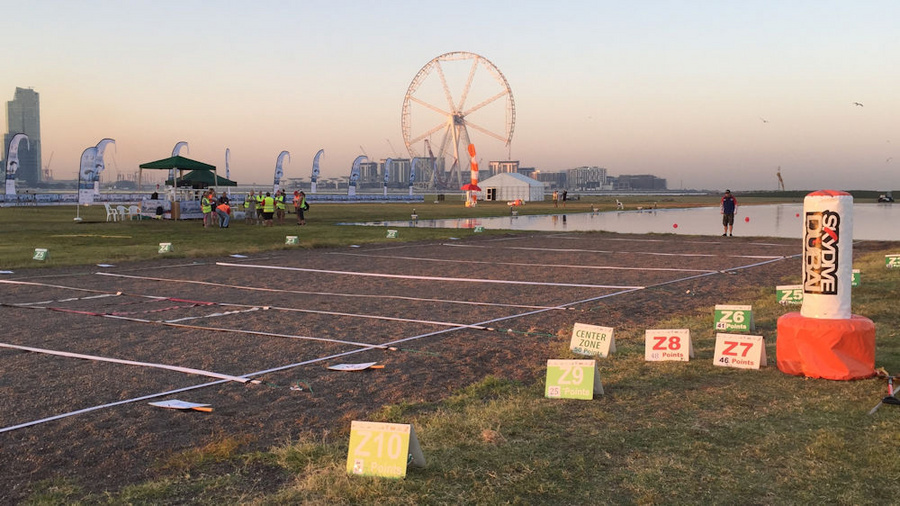 The Swedish competitor, Stefan Burström was setting up his own tracking camera system at the side of the pond.  He has a GPS device on his helmet which sends a signal to a gyro mounted device linked to his camera.  Thus he is able to film and track his flight from turn to landing.    I hope to obtain some footage for our Facebook and Youtube channels.  Meanwhile it was good to note Stefan scored 91 on his first jump putting him in  equal 5th place.

11.45am:   3 Rounds of Accuracy completed with one rejump left to do as soon as possible, following a cutaway.  The top three places in Accuracy were decided on the last round - with Cornelia Mihai dropping into 8th place from 1st after a disasterous (for her) third round jump.  Curt Bartholomew (USA) is first followed by Nicholas Batsch  (USA) and Mohammed Baker (UAE) in third place (subject always to final confirmation of the scores by the Chief Judge).   With one round of Max Distance to go tomorrow the Overall positions are Nicholas Bastch (1st), Curtis Bartholomew (2nd) and Mohammed Baker (UAE) third, with Cornelia Mihai (UAE) a close 4th.

There will be a Competitors' Meeting with the Canopy Piloting Committee members as soon as jumping ends.