Drone racing is one of the fastest-growing air sports in the FAI, attracting thousands of youngsters each year.

As well as being fast and exciting it’s accessible. Pilots can join club leagues and get racing very quickly, often at local airfields or alongside more traditional aero-modelling clubs.

But there is more to a good drone-racing venue than simply putting poles in the ground and racing around them.

"A good venue starts with work that is done ahead of time," he explained. "We need to understand the electronic signature of that area. All the Wi-Fi that is being broadcast into the area, for example." 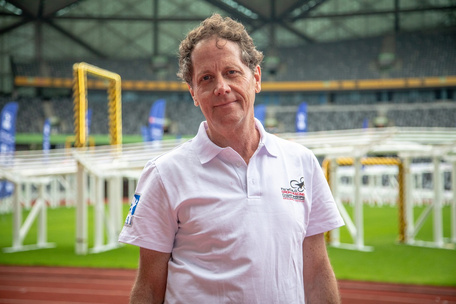 Drone-racing relies on clear electronic signals between drone and pilot. The video signal goes from a camera onboard the drone to the pilot's first-person view headset. As the pilot is reacting in real-time, often at high speed, any interruption in that signal could cause a pilot to crash their drone.

"The first thing we do is walk in and 'sniff' the area with a spectrum analyser. We connect it to our laptop and examine the whole venue."

Where they find a signal that they think could interrupt the drone-racing, they will try to address it. "For example we will go to the IT department of the local business and see if they can shift their signal a little bit.

“The idea is to allow us to have four, six or eight video channels available for us to fly with. Sorting out the video issue at the beginning is very important."

"After the electronic environment has been sorted out, well there has to be enough space. A football field, a baseball diamond, that is enough space to have a very good race."

Then there needs to be space for the pilots to work safely and comfortably, electric power, and space to put the ground stations that allow the video signal to be relayed without interruption.

"The track design needs to be good. Like golf courses, drone-racing tracks can be wildly different. There are things that must be taken into consideration, like we don't want to have corners where the quad might fly off into the crowd, for example."

The main consideration for the track is that it is 3D space. "We have seen drone racing inside buildings, for example, although it is technically more difficult to sort the video signal ... but flying inside is a wonderful thing because you fill the volume."

Indoor venues also allow the lighting to be adjusted, while outside the drones must race with numerous LEDs to be seen.

In Shenzhen, the FAI World Drone Racing Championships will be hosted in the spectacular Shenzhen Universiade Sports Stadium. A digitally-clean environment that was thoroughly tested at the 2018 China Drone Racing Open in May. 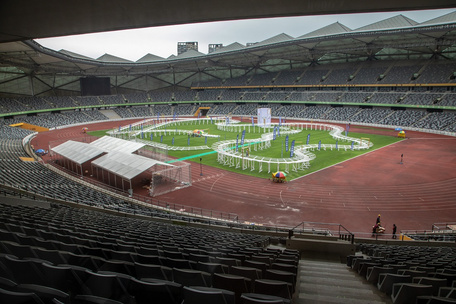 With plenty of space for spectators and pilots the outdoor night racing is expected to offer a spectacular show. A great track in a perfect venue.