The youngest pilot in the Coupe Aeronautique Gordon Bennett is Mateusz Rekas from Poland. At 25 he might be 45-years younger than the oldest pilot here, but he is definitely not inexperienced – this is his third time in the competition.

“I’m below average age, that’s for sure,” he jokes when asked how he got into the sport at such a relatively young age. “I was a hot-air balloon pilot for quite a while before I got into gas ballooning. 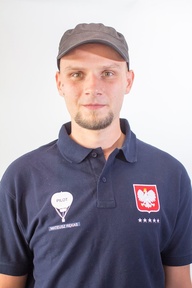 Both his father and uncle fly balloons. “In fact we have a lot of hot air balloon pilots in the family.”

He started competing alongside his father. “That is how I got interested in racing.” This year he competed in the Junior World Championships and placed 11th. “I made a lot of small mistakes and they always add up, but I was satisfied with that.”

Three years ago he decided to get into gas ballooning, and set his sights on competing in the Gordon Bennett.

“Krzysztof Zapart and I decided to make a team and take a shot at it. We contacted Wilhelm Eimers, the many-times world champion, and he decided he could help us and he trained us. And that’s how we got into the Gordon Bennett 2014.”

In 2014 in his first Gordon Bennett the competition launched from Vichy, France. “From Vichy we flew 1,130km to the south east part of Italy. Across the sea. It was a very, very nice flight.”

The flight was, “way above”  his expectations. “Since it was our first time we had decided even if we finished last it wouldn’t have been a problem.

“But in the end we managed to make a good flight with a good score and some good decisions. And we finished fifth.”

What’s it like being up there, just you and your co-pilot, alone in the air, using technology that has changed little for 200 years?

He adds: “At night you can see the stars. The Gordon Bennett is always held at the time of a full moon and the sky is beautiful at night. It’s a very nice feeling.”

Do you stay awake up there or do you take turns in sleeping?

“We take turns. One of the pilots has to be awake all the time. But to be honest, with all that is going on during the flight – strategy, other competitors, the weather changing and so on – it’s hard to get a good long sleep.

“Usually during a 50-hour flight you get two, maybe four hours of good sleep. Usually you are constantly thinking about the flight.”

Returning to this year’s race, what did he think about the decision to postpone launch until Sunday night, 48 hours later than scheduled?

“I think it was a good decision. Otherwise it could have been dangerous or a very short flight.

“But now it seems on Sunday we could make a long distance flight, to maybe Sicily again, or even a bit further to Greece. But we’ll see about that – after all, the weather is always changing.”

And once they do take off, now as an experienced pilot, what would constitute success?

First-10 would be good. If we manage to do better, then that would be amazing.”