Heat one of the Aerobatics contest kicks off the Airshow

The screaming roar of 330-horsepower Lycoming engines filled the skies above the Palm shorefront in Dubai today (December 2), as the first round of the Aerobatic competition got underway.

Eight so-called “unlimited pilots”, the creme de la creme of the aerobatics scene, have been selected from around the world to compete at the FAI World Air Games. Their planes, which cost around €400,000 each, were shipped here specially for the event, and their aerial battle could be seen and heard echoing all along the coast.

Aerobatics pilots perform rolls and dives that put their bodies through positive forces up to nine times the force of gravity. But it's the manoeuvres that create “negative g-force”, sucking all the pilots blood to their brain, that are the most uncomfortable.

To perform the prescribed figures in the air, they must manage the plane controls while their body is being put through these forces, all while stay oriented to the ground. The mental and physical challenges are so demanding that the four heats have to be performed on different days. 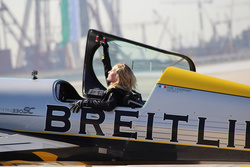 “I should go to the gym more often,” admitted Aude Lemordant, standing by her Extra 330SC as it cools after her 10-minute competition run. “But really the best training is in the plane. That's where you learn the reflexes to contract your stomach against the G-force.”

Sponsored by Breitling, Lemordant is up against stiff competition from rivals such as Mikhail Mamistov from Russia, Artur Kielak from Poland and South African Nigel Hopkins, who is the only competitor flying in a borrowed plane.

Frenchman Olivier Masurel gave us a guided tour of his cockpit, while Mamistov - famous for his focus and concentration - walked through his routine on the edge of the runway.

The final heat - due on Wednesday - is the Freestyle flight, where competitors can choose whatever figures they want to fly.

The judges are looking for accuracy and precision in all the heats. But the scoring in the Freestyle heat is the one that encourages flamboyant flying, and American Hanspeter Rohner, who performs regularly at US airshows, is rumoured to have a stunning display in store for the crowds.