After a rather short for a class 2 distance of the first task, the organisers set the second, third, and fourth tasks of the championships seriously long - 309, 227, and 307 km respectively. These rigid wing gliders are famous for their flight performance which allows them to cover 300 km distance in about 4,5- 5 hours with an average speed of 53-65 km/h.

It was a close run race all the way of Task 2.  Heading towards the last turn point, with a long crossing over the Buech river, from east (Tromas) to west (col de Pomerol), Manfred Ruhmer (AUT), Patrick Chopard (FRA) and Franz Pacheiner (AUT) were leading the way, with little between them.  They were followed, not far behind but on a slightly more southerly route by Jacques Bott (FRA) and Philippe Bernard (SUI).

Manfred took the last turn point first, with Patrick not far behind.  A slightly bigger gap and Franz followed on.  But there was no catching the leaders.  Racing at up to 130km/h at times, Manfred crossed the goal cylinder just one minute before Patrick.  They were both flying super-efficiently, with only a few hundred metres in altitude to spare.  At Aspres, the pilots must maintain an altitude above 1030m from the end of speed section (ESS) to goal, 3km distant.  This is for safety reasons as the aerodrome can be busy with other air traffic in the afternoon.

Franz was third into goal.  Meanwhile, back at the last turn point, Jacques had closed the gap, took the turnpoint and raced to goal.  Still, on the course, Philippe Bernard had got stuck over Beaumont while Rob van der Poel (LUX) had overtaken him.  After Rob, Brian Porter (USA) was next to the turnpoint, not long after.

Philippe Bernard finally managed to get some height, but flew to goal, missing the last turn point.  Philippe Harignordoquy (FRA) had also struggled to get enough height over Aujour, mid crossing, while Pascal Lanser (FRA) and Gunther Tschurnig (AUT) chose a more southerly route, gaining plenty of height, but taking longer, and both also skipping the last turn point.  Australian pilot, Phil Schroder, landed out between La Javie and Digne.

All but one of the pilots have arrived back at goal of Task 3 - 227 km.  The  results show Manfred beat Franz by just 1 second!  And Patrick was just 14s behind.  Patrick in third place, topped out on leading points today. In the overall results after 3 tasks, Manfred is leading, of course, after 3 task wins, with 2617 points, but Franz is only 137 points behind him, and Patrick just another 22 points away.  Jacques and Rob are still in the running in 4th and 5th place.  The field was more spread out today, not only along the course, but the routes they took to various turn points.  You couldn’t just follow the arrow on your flight instrument today.  After the first turn point at the Montagne de Lure, we saw the first divergence, with Jacques Bott (FRA), Gunther Tschernig and Philippe Bernard taking a more northerly route over Chateau Arnoux, north of Malijai and Digne, while most of the rest took a southerly route south of Chateau Arnoux to the next turn point at Pic de Chamatte.  Interestingly, Franz took a route between the two.

A fast glide across the Durance valley and onto the Aujour ridge saw Patrick and Manfred chasing and catching up with Franz.  They had to take care at this point to ensure they had enough altitude to reach goal above the required 1030m.  The final race across the end of speed section and into goal was exciting, as it looked like Franz and Manfred must have been wingtip to wingtip, with Patrick close by too.

Manfred commented: “Yes, it was really close between us for a while, with Franz, Jacques, Pascal and of course, Patrick.  Patrick is flying really well!  It was a close race and fast at the end.  I messed up the last good thermal over Aujour, but luckily there was another one, so all was good and I got the height to make goal!” 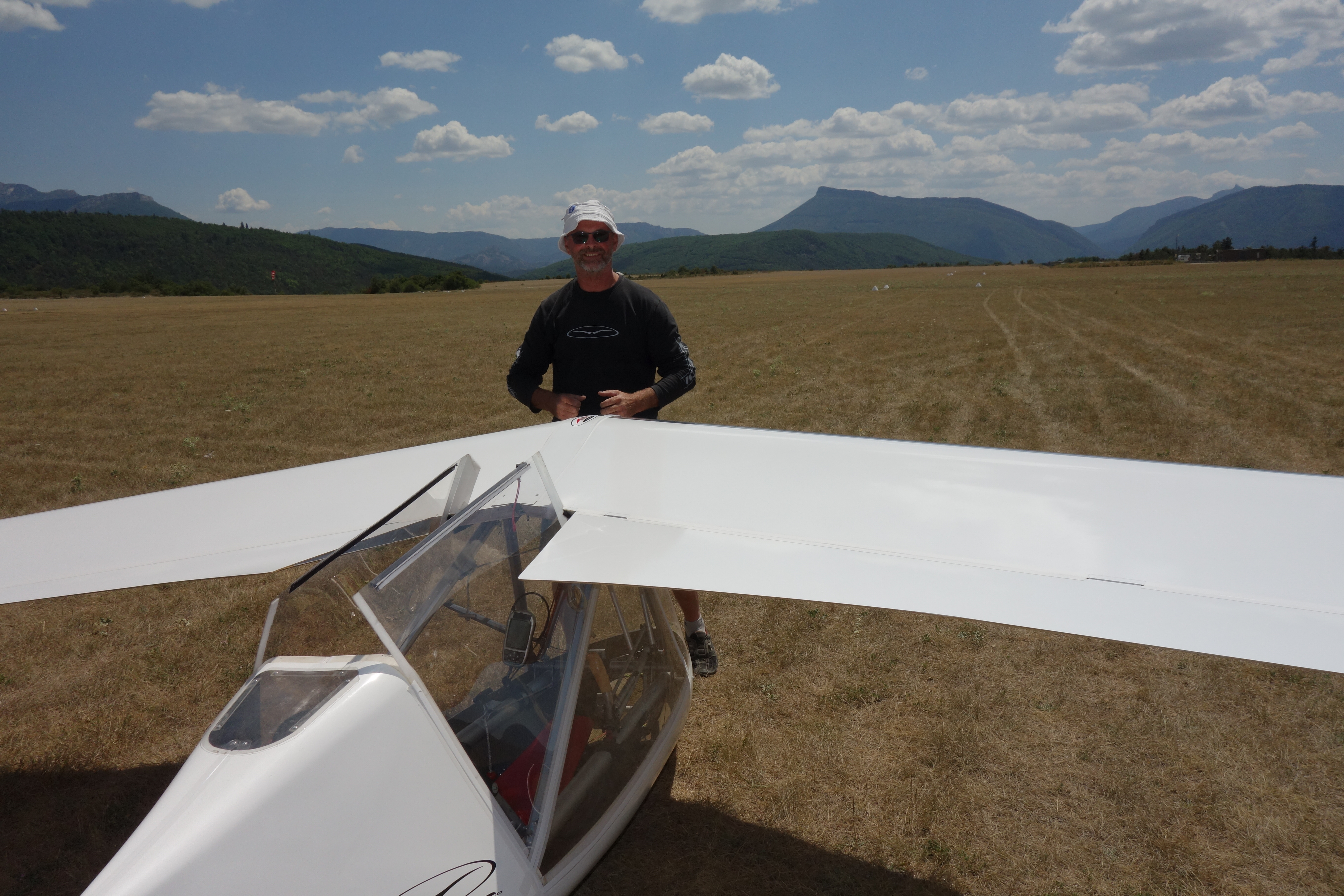 Speaking about Task 3 Pascal Lanser comments: "The flight was very intense. An average speed of 70km/h!  It needs constant concentration.  The slightest lapse costs you dear!  I flew with Manfred, Franz and Jacques as far as Dormillouse.  Probably it was due to fatigue that I lost it in the end.  It only takes a slightly wrong line to get the turn point, going a little further in, and you lose your place.  You really have to optimise every turn to stay in the running.  Patrick was very much on the ball, and took a few different options.  It was great to be able to fly with these guys, and made it much easier to follow them. Now I have to keep up the concentration for the next few days.  The others are not going to let up!”

Patrick Chopard adds: “It was an interesting task, and between myself, Franz and Manfred, it was difficult to take the lead, and then to maintain it. At the finish we were travelling at more than 130km/h and then there were only a few seconds between us.  These three tasks have been very fast and very intensive.”

Task 4 has been set – another 300km+ course taking the pilots initially north-east to Olan on the west edge of the Ecrins national park, then a long leg of 110km to the south to Moustier St Marie, then north to Tromas on the famous Dormillouse to St André ridge run, then west to Sederon, crossing the Durance valley near Sisteron.  The final leg will be north east back to goal at Le Chevalet airfield at Aspres, making 307km in all.

The weather forecast is similar to yesterday, with a high cloudbase of 3000 to 3500m and a mostly light southerly breeze in most sectors.  The northerly wind is still prevalent to the north and west of the area and may become significant at the goal field later.

Louise Joselune reports: Another exciting task, with a well spread field of pilots across the course.  But it was a close finish for the first three.  Manfred Ruhmer (AUT), once again arrived first, with Jacques Bott (FRA) in second place and Franz Pacheiner (AUT) in third, and once again within minutes of each other.  We have to wait for the results before we can see the points difference.

The pilots were well grouped at the start, but on the long leg south, pilots had a choice of routes.  They almost all flew over Ancelles and then their paths diverged.  Taking the classic, longer but surer route to the east, heading towards Dormillouse were Jacques, Pascal Lanser (FRA), Franz and Patrick Chopard (FRA).  On the more direct westerly side, over Mont Colombis were Rob van der Poel (LUX) and Philippe Harignordoquy (SUI) chasing Brian Porter (USA).  Taking a central route between the two, and on his own, was Manfred.  Brian looked to be ahead for a while, but as the eastern and centre routes converged, Manfred was ahead.

By the time they reached the most southerly turn point, and had turned back north east towards Tromas, two distinct groups had formed.  Leading out were Manfred, Jacques and Franz, with Pascal not far behind, but soon to be caught by the next group which included Brian, Rob and Patrick.

At the last turn point near Sederon, Manfred was leading out, followed by Jacques and then Franz.  Thus, the race to goal was underway.  Just beyond Beaumont, Jacques took the decision to gain a little more altitude to ensure he reached goal with good height.  Manfred continued on a direct line and making ESS and then goal with only a couple of hundred metres spare.  Despite topping up, Jacque’s line to goal clearly took him over a sinky section and he just made ESS and goal with even less margin.  Franz was third across the line with good height.

Jacques Bott shares his impression: "There were very powerful thermals in the southern sector, making it turbulent in places.  I did not want to fly too fast through that!  I was very surprised to see I was leading at one point.  I found some very good thermals very quickly, which helped.  The last leg was challenging too.  I raced through many thermals to reach Beaumont.  There is always a good thermal there on the west side.  Except for today there wasn’t!  Luckily I found a small one just beyond, and after two turns I had enough height to make the goal. That was close!" 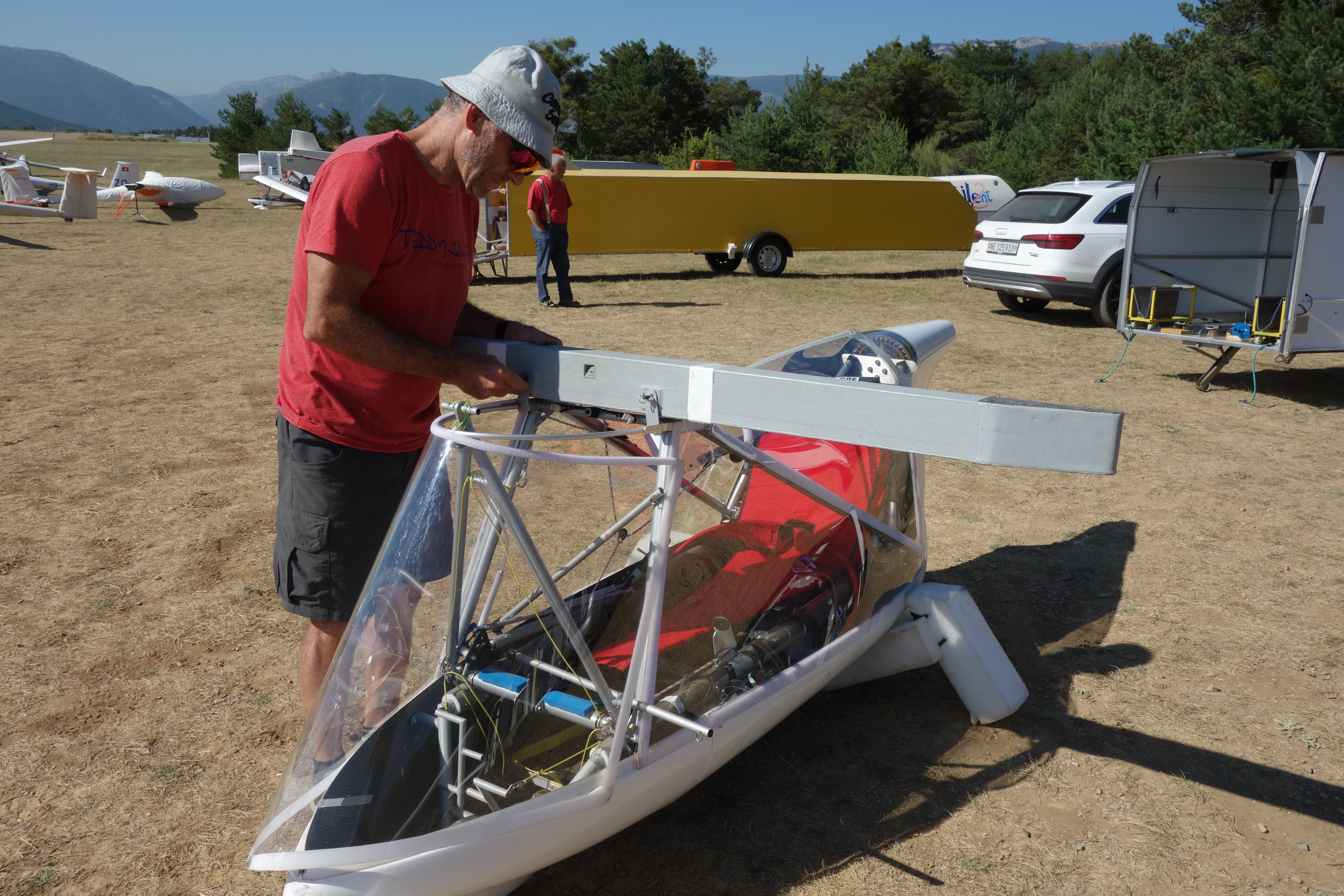 The tricky bit of every task is when the scorer verifies the motor use files of those flying with electric motors.  The forecast is looking good for the next days, so the competition is still wide open.