Organising a world championship with a difference

World championships are of course a highlight of the calendar for competitors and their entourage, but it is not commonplace to have many visitors from outside the gliding or air sports community. When bidding for the UK to host the 11th FAI Women’s World Gliding Championships, pilot Liz Sparrow and her team of passionate volunteers wanted to shake things up and use the opportunity to showcase gliding and air sports to a wider audience.

Engineer by trade, and top pilot in her spare time, Liz Sparrow would usually be seated firmly in the cockpit at gliding championships. But alongside a group of other motivated members of the UK-based organisation Women Gliding she decided to opt out of competing in the 11th edition of the WWGC and put forward a bid to hold it in Husbands Bosworth, UK, with Liz taking a seat in the director’s chair. 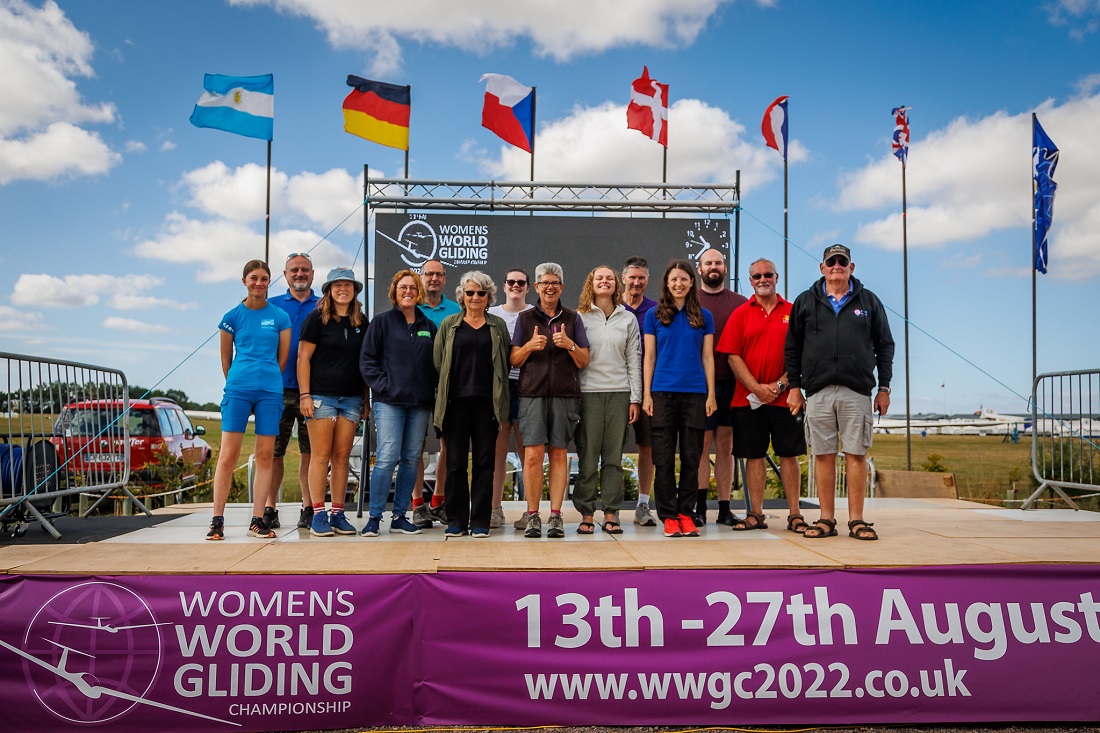 With the aim of sharing the experience from the bidding process to finding sponsors and managing media and volunteers, Liz spoke about her thoughts after the event:

As a founding member of Women Gliding, Liz has long been passionate about getting more women into aviation:

“In gliding and I believe in aviation in general, the percentage of women participants is around 7%. We need to address that, and so in 2018 we conducted a big survey to find out who female glider pilots are, why they fly, why they don’t fly any more, and what was putting them off. Using this valuable research, we restructured and rebranded to improve our messaging. There’s so much evidence that proves ‘you have to see it, to be it.’”

Liz and the team wanted the event to showcase not just gliding but aviation in general, and to encourage families, especially women and girls to come the event, as simply getting people to the airfield is the first hurdle. “Gliding is like a gateway drug into aviation!” she jokingly remarks, adding that the team viewed the world championship, “almost as a hook, just something on which to hang many other activities and opportunities.”

Their vision was to create an event which brought together a diverse range of exhibits and activities for visitors, including female role models in aviation, real aircraft on display, STEM activity stands, flight simulators and a Sustainable Aviation Show area, as well as music and food! 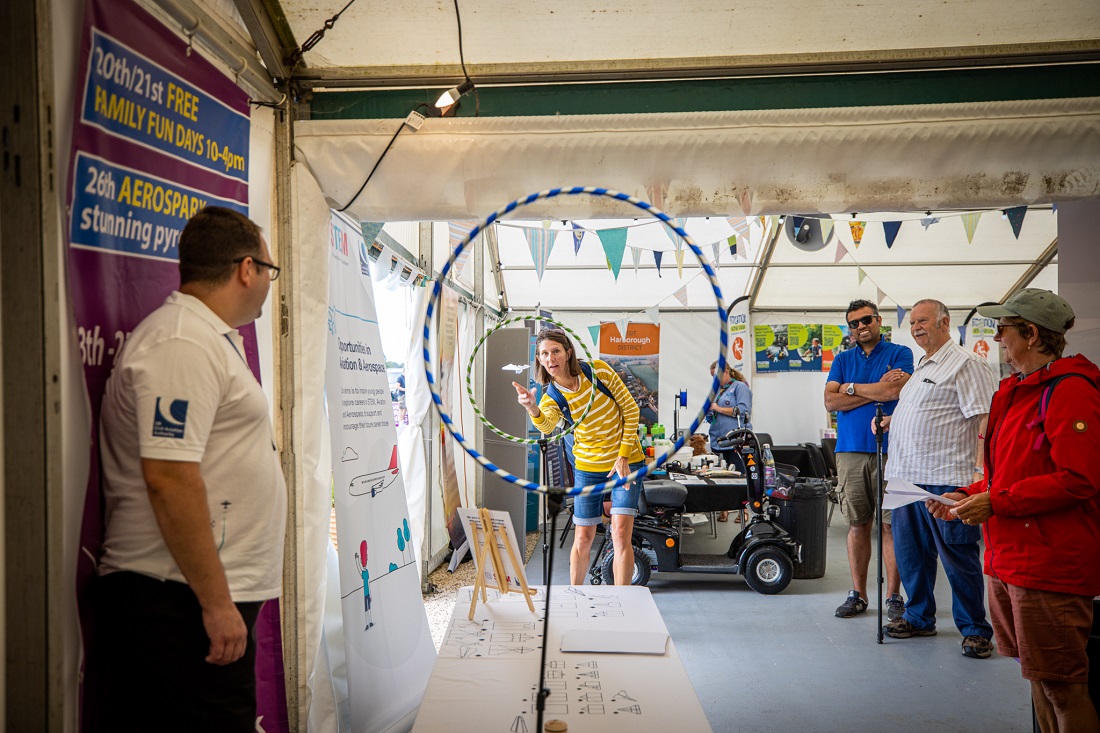 Even before bidding for the championships, a solid team was already being compiled, who together outlined a clear vision for the event and a structure for the organisation. Those involved were experienced in organising larger events, which was integral to the success of the WWGC.

There was a core team, each of whom oversaw a smaller committee which focused on an individual part of the project, for example marketing, STEM etc.

Finding useful contacts was a vital part of the early stages, as the ideas for encouraging members of the public to linger at the airfield were essential to making the potential of the event stand out for those receiving the bids. So what made the Husbands Bosworth bid stand out from the crowd? Liz believes that the early organisation and the wider agenda helped the UK to win. 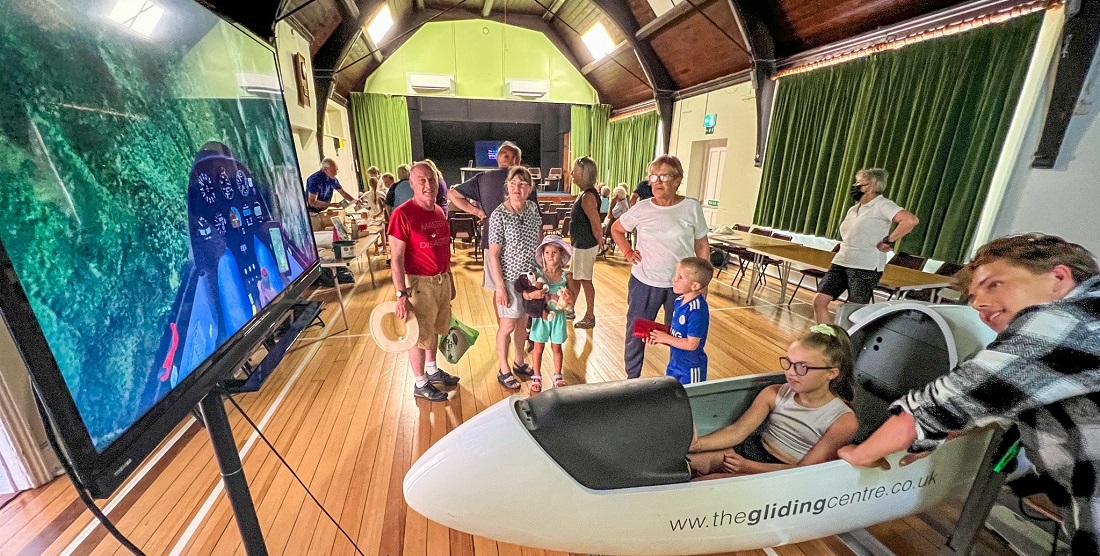 All ages were welcome to try the flight simulator

Mindful that cost implications for pilots can lead to fewer registrations, the team wanted to keep fees as low as possible. That meant that the financing of the extra activities had to come from sponsors. Time to make some calls!

“It was essential to reach out to both the local community and to larger national organisations, and not just in the gliding world. But first we had to work out exactly what we were offering in return for sponsorship…

We knew we weren’t able to offer the marketing possibilities that larger internationally televised events can enjoy, but we had something else up our sleeves: people! People who engage in gliding, in aviation, in STEM subjects, from an early age, make really great employees. Youngsters can learn to glide aged 14, and those who are given the opportunity to take responsibility for themselves, and an aircraft, gain awesome life skills. At airfields they mix with people of all ages, they become part of a team, and they use their brains. We found that companies and organisations wanted to engage with these people and were keen to help us out.” 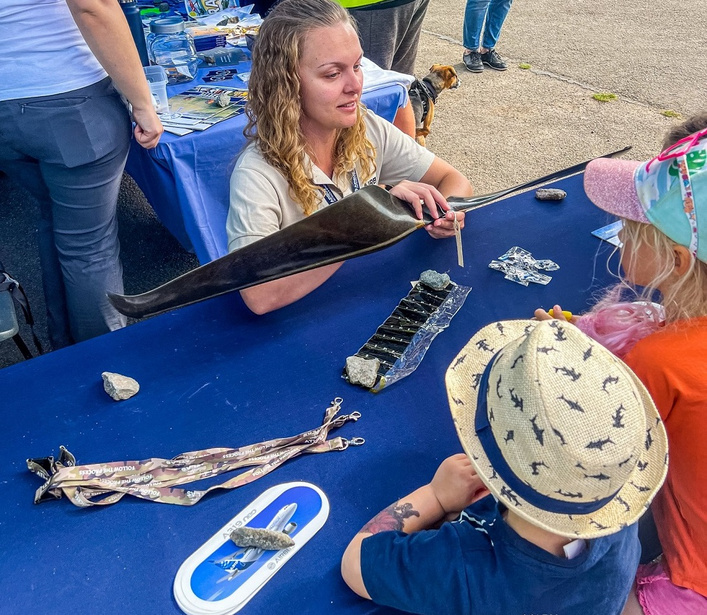 Learning about flight with Task Setter Harriet who is a Satellite Systems Engineer for Airbus, one of the sponsors

A ’hit list’ of 5-6 big names were contacted, both corporate and public service. “We tried all sorts of ideas. Some were successful, some not, but when we did get sponsors on board, it became a good partnership with benefits for both sides.”

Liz was also approached by local community organisations who wanted to get involved. “The Inner Wheel – like a rotary club but led by women – were a great source of help. One of their members Suzanne joined the Core Team and led the Events workstream, and Inner Wheel were key to networking and building relationships with local government and organisations, and recruiting volunteers. They put us in touch with local music groups, caterers and suchlike.”

The organisers also contacted the Air League UK and the Department of Transport Aviation Ambassadors (a group of which Liz has been a member) for advice, who put the team in touch with other organisations and people.

A key takeaway regarding financial support was that, “organisations are more keen to offer ‘stuff’ and time rather than financial support, so we made the best possible use of what we were offered!” 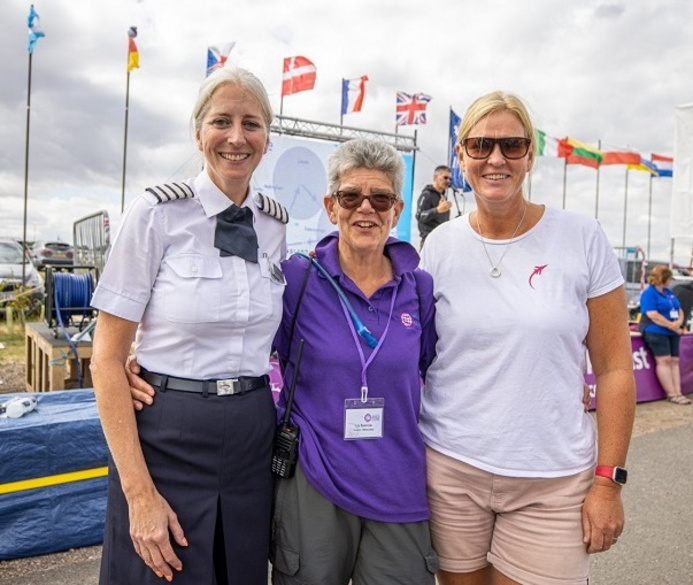 Liz Sparrow (centre) with (left) Suzanne Morgan, 777 Captain for British Airways, and
(right) Mandy Hickson, former RAF fast jet pilot and author of ‘An Officer, not a Gentleman’
– two of the Inspiring Women who spoke about their life in aviation and encouraged youngsters to follow in their footsteps

The whole event was staffed solely by volunteers. But with such a long event it wasn’t always easy to find people who could help out for the whole duration of the event. Liz notes that “employers often allow their staff to take paid time off for volunteering work as part of their corporate human resources/CSR strategy. We tapped into that and managed to get our volunteer team to use a combination of annual leave plus paid volunteer hours which really helped.

To recruit the volunteers, each committee made use of their individual contacts within the gliding community and further afield.

One thing Liz notes in hindsight is that “you actually need more volunteers during the practice week than during the actual competition, as there is still all the setting up to do as well as the flights.” 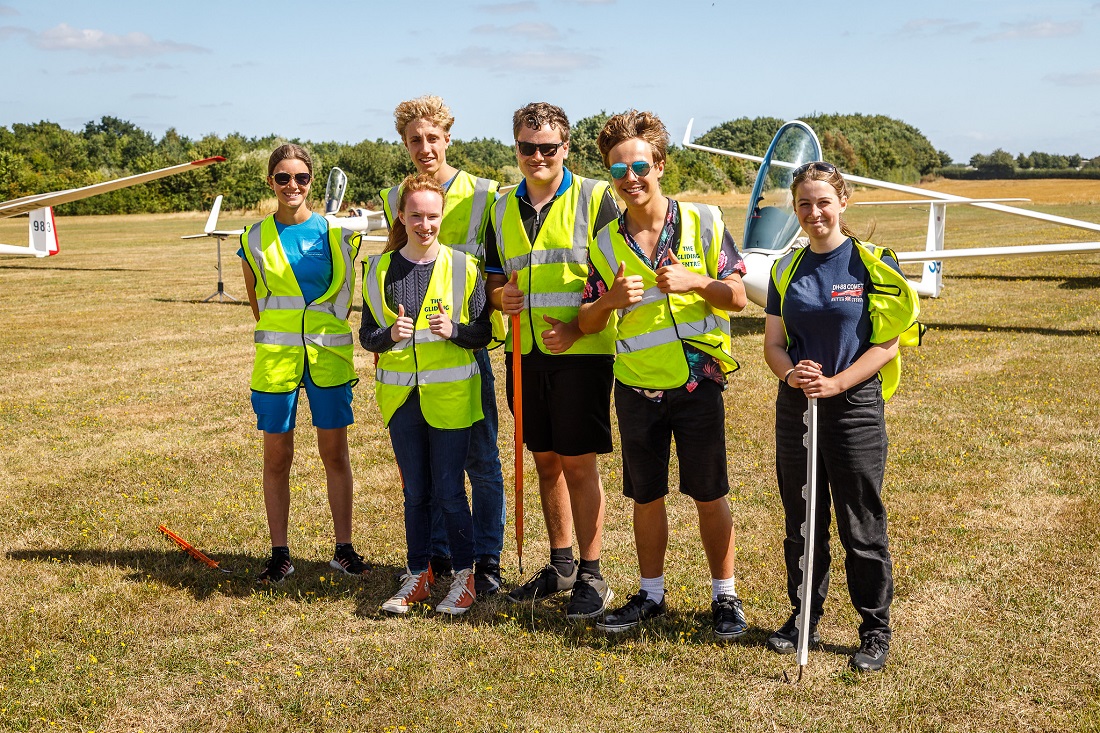 The event was run solely by volunteers

Liz comments: “We knew that media was going to be hugely important to attract the public and so we devoted a committee to this alone. We prepared a schedule of communication to talk about STEM and all the activities and presentations we were offering. We set up the website and social accounts and with the logo we used similar styling to Women Gliding to create familiarity and branding.”

The team was delighted when photographer and videographer Georgia Schofield from New Zealand – also a glider pilot – contacted them to offer her assistance.

“Having Georgia’s input has been amazing, the messaging and the images have just been brilliant. They’re also a great resource for us to use for the future, we can use the photos for a whole variety of purposes.”

With the event postponed due to covid, there was also an extra ‘spare’ year to manage, but in fact this gave the opportunity for further messaging and stories to be fed to the media.

After a successful event in which public visitors numbered around 2000, with many families staying to enjoy the festival atmosphere, how can the aviation community learn from the organisation of the WWGC? 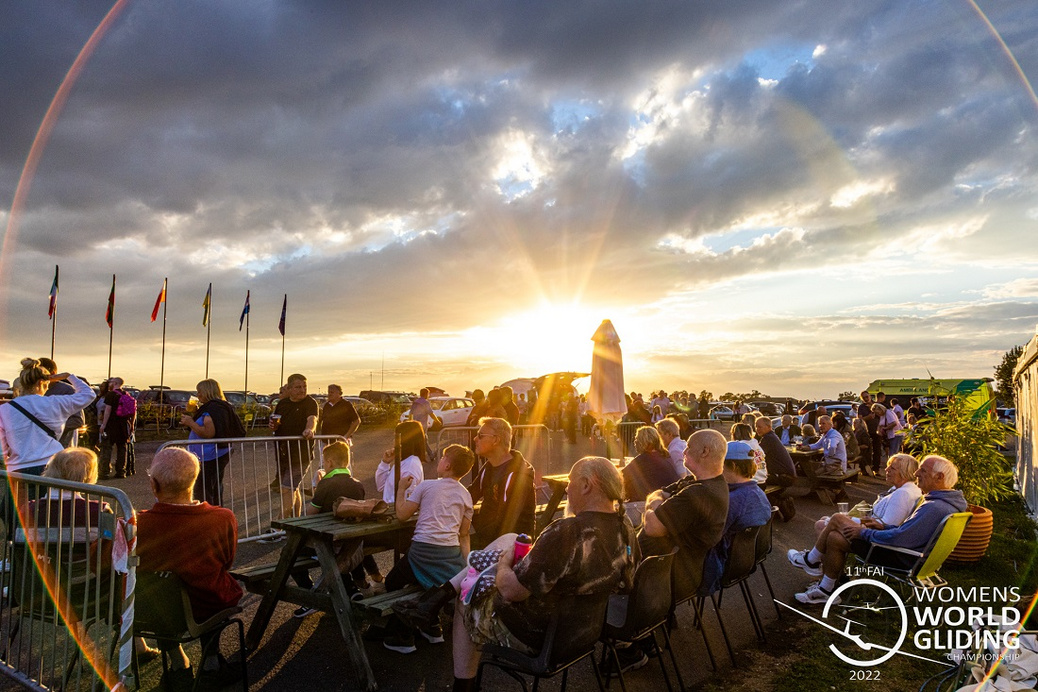 The festival atmosphere helped people to linger and enjoy the event

Liz is due to have a full review of the project with the core team to put together their findings and thoughts on how to build on the success for the future:

“Our aim is to set up some resources that are scalable: for local clubs to encourage new participants and visitors, as well as for larger events further afield. We have some great contacts and Georgia’s videos which we can take into schools to inspire the next generation of aviators. The organisers of the 12th WWGC in Garray, Spain, visited us and we will chat with them soon to share our experiences.”

In terms of how the actual event ran, Liz is “really pleased. The feedback has been very good. We had outrageously good weather for practice, but most of the competition days were very testing, and it was hard work for the task setting team and challenging for the pilots. But all in all, I’m really proud of what we achieved. There was no damage, and the atmosphere was safe and courteous in the air. And we achieved our wider aims of engaging people outside the sport.”

And what does the 12th WWGC hold for Liz? “I very much enjoyed seeing all our hard work and our vision come to life, it’s been brilliant. But in Spain you will probably see me back in the cockpit!” 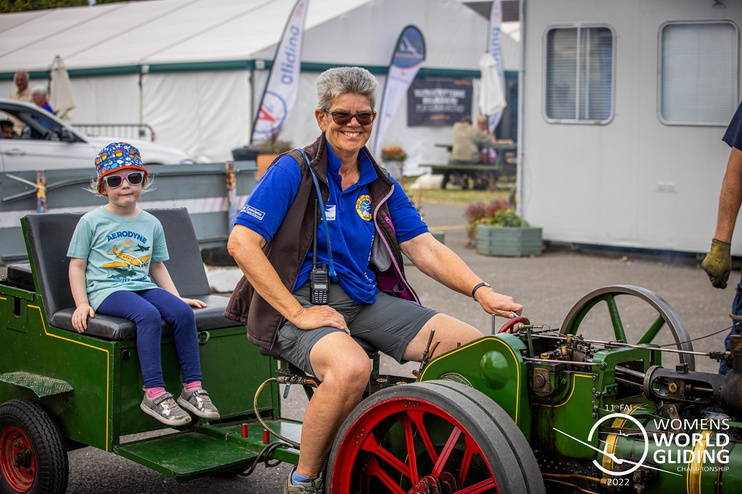