Standing around, gazing out at a world he could not wait to explore, Canadian hot air balloon pilot Sébastien Poupart was admittedly a bit bored for several hours. Little did he and co-pilot Johann-François Ouellette-Frève know that a few hours of that would be nothing compared to what many would face later in the spring as COVID-19 lockdowns confined much of the world to our homes. For them, staring at the same scenery during their record-setting flight this past January are better memories than most people will have from this year.

For 9 hours and 57 minutes, on January 30, 2020, Sébastien Poupart and Johann-Francois Ouellette-Frève floated over rural Québec on their way to shattering the Canadian record for flight duration in the AX7 Balloon Category. It would not have been boring, but considering they eventually landed less than 10 kilometres from where they launched, the scenery did not change much!

"It wasn't the most palpitating flight," admitted the understated Poupart who, along with his co-pilot, are part of a resurgence of younger pilots in Québec. This new group is seeking to repeat and expand upon the adventures of the previous generation of balloon pilots.

Few of them would qualify for the FAI Junior category that is capped at 29 years old, but in a world of greying pilots their renewed energy and enthusiasm is catching on: there is a waiting list of students hoping to be trained and licensed. Some are sons and daughters of former pilots, while others have been brought into the orbit of the International Balloon Festival of Saint-Jean-sur-Richelieu, Canada’s largest hot air balloon festival that took leadership to address the situation by starting a successful flight training school a few years ago. Many graduates now fly their own balloons during the annual event and the momentum it has generated has seen other private pilots and balloon companies support their crew members to get their own licenses which will keep the skies full of pretty balloons for years to come.

The excitement of the two pilots in question was surpassed only by their preparation. They had a 6-hour practice flight last winter in their home region of Montérégie in southwest Québec. The region is characterized with very flat farmland with isolated hills ranging from 700 to 3600 feet tall, remnants of what might have been volcanoes a long time ago. 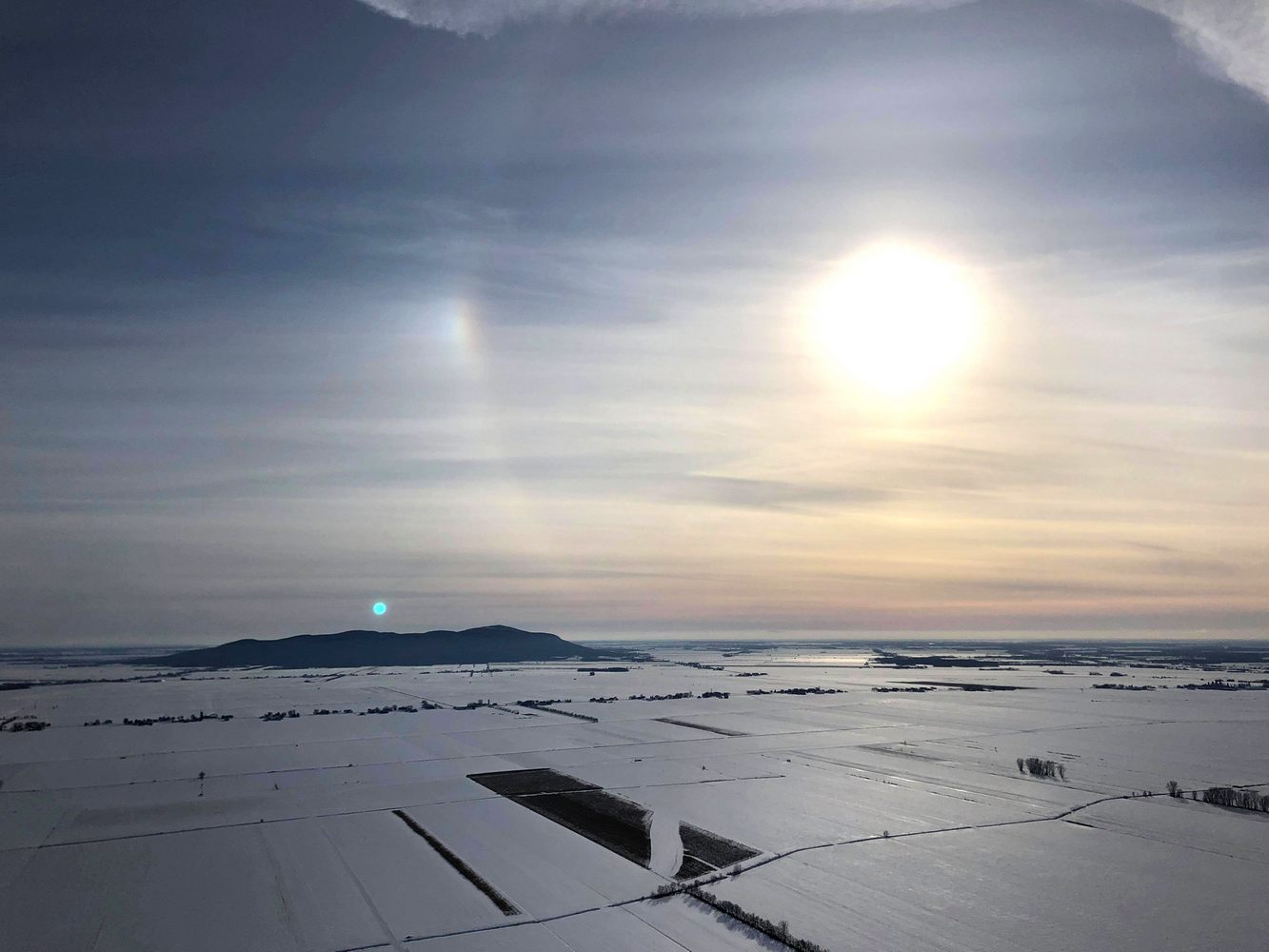 Montérégie is characterized by flat farmland and occasional mountains jutting out of the ground.
During a high pressure system in mid-winter, the scenery might not change much if there isn't any wind

Canadian winters are ideal for record-setting as very stable, high-pressure systems with low temperatures mean you can fly seemingly forever. And it is not as though Canada lacks space if you do pick up speed; large open fields provide great landing options. In Québec, they are characterized by the French seigneury style – long, thin strips with river access. Further west, they reflect the British colonial style of two mile by one mile concessions. Both offer plenty of room to land when they are covered in snow.

In fact, UK pilot Alicia Hempleman-Adams came to Canada to set the British and World record for altitude in an AX-4 and did so on Feb. 7, 2020 at 15100 feet in High River, Alberta.

Having identified a good high pressure system, Sébastien and Johann-Francois got to the launch site at St-Hyacinthe airport (Southeast of Montreal) on Jan. 30 and the temperature of (-16) C and winds @ 2-3 knots were not a major concern. Everything had been calculated. They were exactly at the maximum capacity of 638kg at launch in Sébastien's Ultramagic AX7 with 325 Liters of fuel onboard.

In the initial hours, fuel use was slightly higher than the 15-18Liters/hour they predicted. The sheer weight of the extra fuel literally dragged them down. As they burned off fuel, it got better.

They kept busy continuously checking fuel levels, making calculations, and looking at windspeed and direction (to avoid heading into Montreal's ATC orbit). After a while, a certain rhythm developed.

The real highlight of the flight was noticing a massive traffic jam on Highway 20 below them. As they crossed at a snail's pace and investigated why so much traffic had built up at midday, they realized it was because of them. Balloons sightings are not rare in this part of Québec, but they still managed to cause a stir.

On the ground, their ground support team of Marie-Christine Déry, Philippe Levesque, Arnaud Isabelle and veteran observer André Lapointe kept watch. Without proper evidence that the balloon did not touch the ground during the course of the flight, the result would not count.

"It was a bit long on the ground, but we had little jobs to do. Sending up pibals. Going to Tim Hortons." explained Déry. "At least we were warm."

Not that the pilots were complaining.  They sat at a balmy (-7) C once the sun was up. And with no wind to worry about and a burner above, they can report that no extremities were lost to frostbite. "We had the time to look at the landscape and try to help us with the wind direction during this sky clear day," said Frève.

Recalculating and recalculating, it became apparent they would have enough fuel for 11 hours. As they blew past the old record of 8hours 10minutes set in 2004, they thought of landing right where they took off but opted to keep going.

In the end, it was not wind, fuel or airspace that made them land but field selection with a setting sun. The last thing they wanted to subject their crew to after such a long day was a carry out of the equipment from the far end of a field with deep snow. Touchdown was recorded 9 h 57 minutes after launch.

With one record down, the two pilots are already looking at what they could aim for next.

"The conditions for a record distance flight in AX7 do not come around quite as often," observed Poupart.  But beating the 278 km distance record could be next. And Johann-François has expressed an interest in flying gas balloons.

As pilots get back in the air after staying on the ground at home due to COVID-19 lockdowns for months, occasional seconds of boredom in flight are appreciated rather than merely tolerated. For their part, Sébastien, Johann-François and a few others (including me) have been hard at work organizing the first hot air balloon competition in Québec in over 15 years with the majority of pilots who expressed interest in participating having never competed before. Expect more records to fall as a new energy uplifts ballooning in Québec and the rest of Canada. 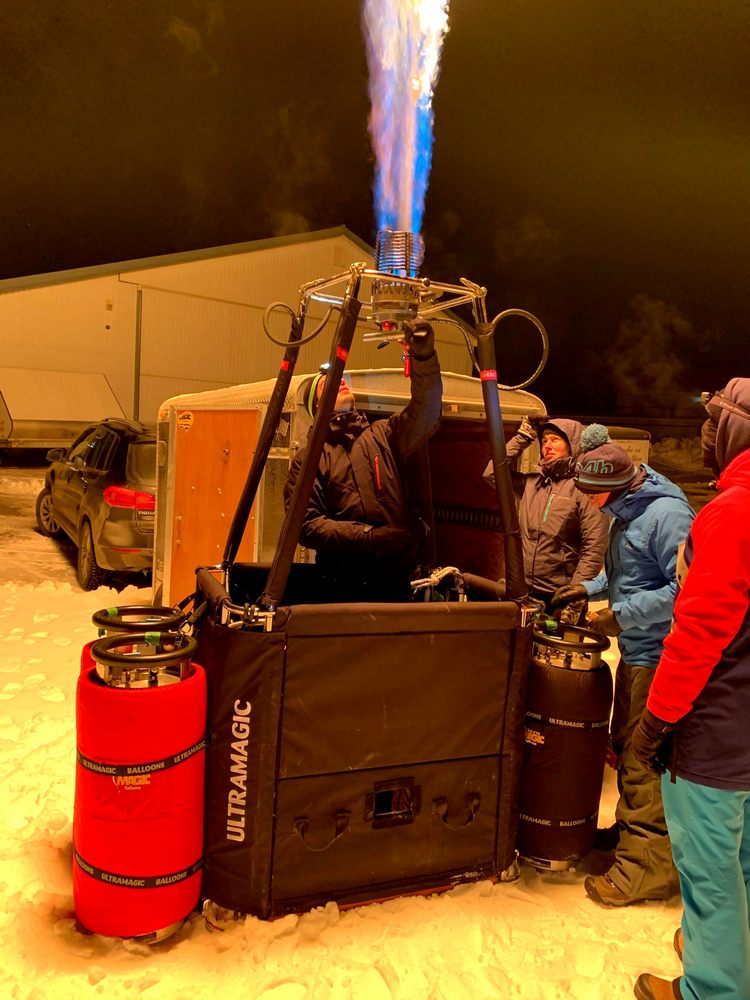