What it takes to defend a World Championship

It is one thing to win the Red Bull Air Race World Championship, and quite another to defend the crown. Three former titleholders – and the reigning World Champion – share what it is like to be the pilot everyone wants to beat.

Since the World Championship began, there has been only one pilot able to clinch the title in back-to-back seasons, Great Britain’s Paul Bonhomme. The sport’s most successful pilot, Bonhomme claimed overall honors in 2009 and 2010 (and again in 2015), so he knows how it feels to bear the weight of expectation.

“On one hand, once you’ve won and got the monkey off your back, there’s a certain bit of you that’s super relaxed, because you think, ‘You know what? I can actually do this,’ and that takes away a load of stress,” says the British aviator.

He continues, “Of course the bad news is you can’t improve on the World Championship. That is the tricky bit: You must say to yourself, ‘OK, how do I stay here?’ And that requires a lot of work. You know the guys below you are going to compete even harder, so that is half the battle – realizing you have to improve. It’s daunting, but if you’re clever, you won’t let it get to you.”

Germany’s Matthias Dolderer, who captured the World Championship for Germany in 2016, agrees, noting, “Once you’ve won a championship, no one can take that from you, but then you have to think, ‘How do I find a new focus?’ You have to reset completely, because a new season starts, and the cards are reshuffled. Everyone is getting better and better, the times are very close together, and nothing is guaranteed.”

Bonhomme found a no-nonsense method for hitting that mental reset button. “I considered I was World Champion until a minute to midnight on December 31st,” he reports. “I said to myself, ‘January the 1st, I am just another pilot. And if I want to win, I have to put in all the effort that made us win last year, all over again.’”

The USA’s Kirby Chambliss is not only a two-time Red Bull Air Race titleholder (2004 and 2006), but also a former World Freestyle Aerobatic Champion. “You know, a lot of people say that it’s more difficult after a world title, but to me, I always felt better about it because I knew that I COULD do it. The first time that you win, you’re almost a little surprised, like, ‘Holy cow, I did it!’ But then, if you win enough you start to expect that, and sometimes you can start carrying the momentum so that you’re winning races right off the bat in a new season.”

The American goes on, “However, I think that anytime you’re not doing well when you’re starting your season, then it has the opposite effect, where you feel like it’s harder and harder and harder, and it never seems to go your way.”

Dolderer, who had ups and downs in the season after his championship, knows that frustrating feeling. “For sure, whether you want it or not, there is more pressure on you: from yourself, your team, your partners, the media, your friends, the fans – from everyone,” he acknowledges. “And at those first races, it’s no longer, ‘Well done for making the Final 4, or second or third.’ If you don’t perform at the highest level, it’s like you’re losing, and that’s hard.” 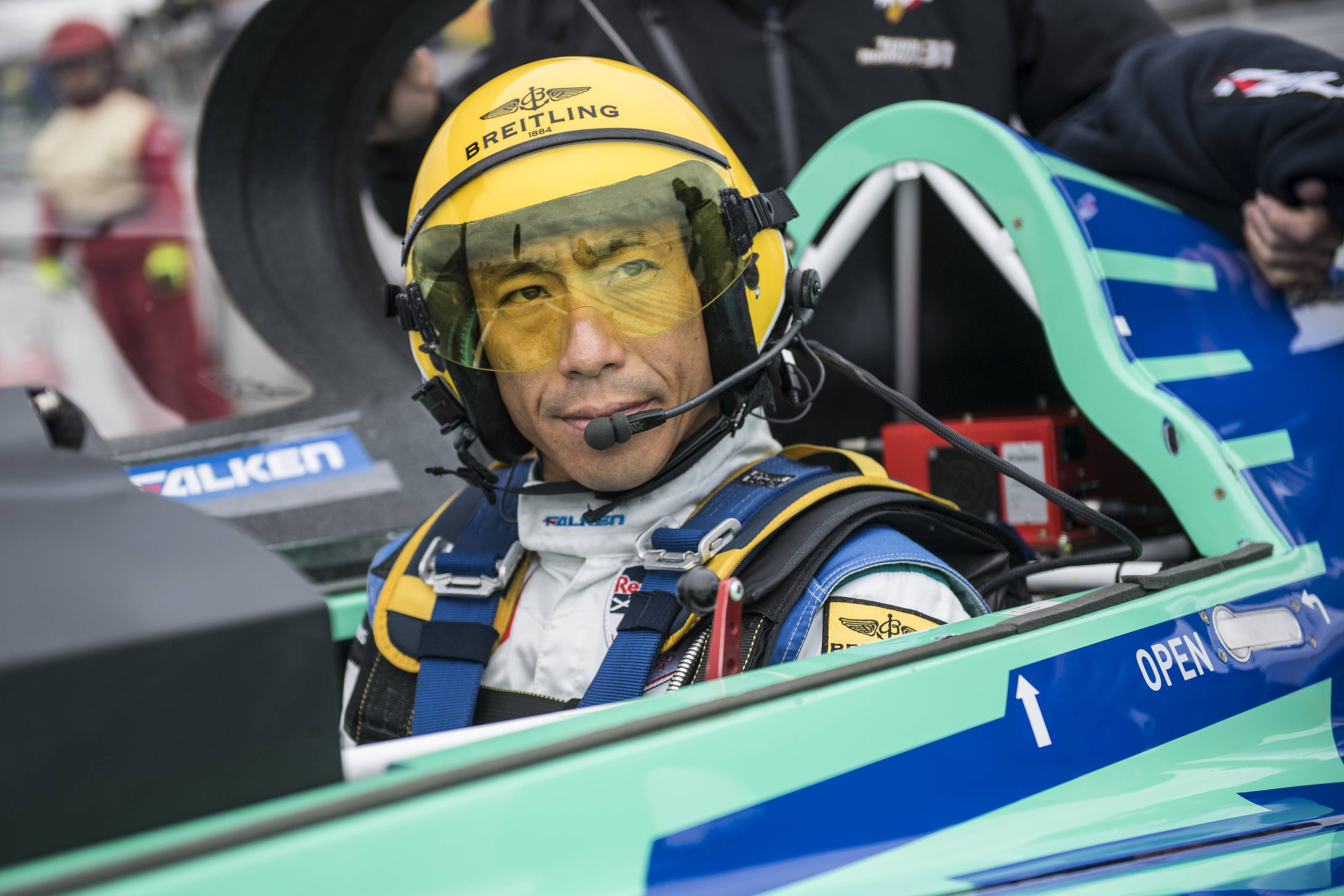 Reigning World Champion Yoshihide “Yoshi” Muroya of Japan (pictures) got his first taste of that pressure at the kickoff of the 2018 Red Bull Air Race season in Abu Dhabi on 2-3 February, and he seemed to take a page from Bonhomme’s book.

“2017 has finished, and we have left all the trophies and wins back there,” Muroya declared before the race. “It doesn’t matter that I got the World Championship title last year, this is a new season and we want to do it again.”

The Japanese pilot finished second in Abu Dhabi, and while it may not have been a win, he seems relatively satisfied with his best result ever at a season opener.

“Being the World Champion is a kind of pressure, but I use it as a lift to get stronger. We’ve learned a lot and we have more experience, so we will be even better this year,” he asserts. “The Championship is really tight, maybe tighter than last year, but I think we’ve had a very stable start.”

Muroya concludes, “The season is long and we have to stick it out for 10 months, so we don’t think about an individual race result. Build up faster and stronger, and we’ll be building toward the World Championship.”

FAI and Red Bull Air Race World Championship signed an agreement including the provision of FAI medals especially designed for the Red Bull Air Race, the inclusion of all races in the FAI Events Calendar, and the official approval by the FAI of the race Rules & Regulations. Furthermore, the FAI provides a safety delegate who attends all events to supervise safety aspects.