After a week of very exciting competition, French pilot Maximilian Seis, 22, was crowned Champion of the 6th FAI World Sailplane Grand Prix Championship yesterday in Varese, Italy. Christophe Ruch, also from France, finished with the silver medal and Sebastian Kawa from Poland with the bronze.

The weather during the competition was good and allowed five good racing days with distances of around 200 km and average speeds up to 123 km/h. The last day’s race was challenging with deteriorating weather and eventually ended with no points being attributed because no competitor managed to finish the task.

Pilots from 10 countries fought hard for the title of World Champion. The reigning world Champion Didier Hauss (FRA) was unable to find his form in the Lombardy region unfamiliar to him. He was joined at this final by three of his fellow countrymen who all qualified in one of the FAI Sailplane Grand Prix qualifying events. The next strongest team to France was the Italian.Former World Champion Giorgio Galetto, Riccardo Brigliadori and Thomas Gostner - all from Italy - were the local favourites, none of whom managed to make the podium. Former World Champion Sebastian Kawa found the change to 18m class sailplanes tough and only managed third place with Christophe Ruch from France taking the silver medal on the podium. 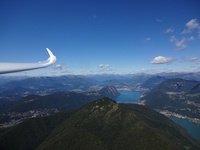 The winner Maximilian Seis from France was the youngest competitor and one of the least experienced. He proved that talent and motivation are two of the most important factors in winning a FAI Sailplane Grand Prix. Seis won two of the races, was 4th in two, and placed 6th on the other race day, thus winning points on each day and flying very consistently.

Each day’s racing was watched by the public on big screens at the airfield with live commentary from expert competitions pilots providing a real insight into the intricate details of Sailplane Racing, as well as on the main square of Varese and in Volandia, the aeronautical museum. As for all the fans who could not make it to Calcinate, they could also follow the race live on internet.

The contest was hosted by the Aeroclub Adele Orsi (ACAO) on the airfield of Calcinate near Varese in northern Italy, under the Presidency of Margot Acquaderni, herself a well versed international competition pilot. ACAO is the foremost Club in Italy and is known for its excellence and international activities. The race area was amongst the beautiful lakes and mountains of this Alpine region within easy reach of Milan, a perfect catchment area for local visitors.

The closing ceremony took place yesterday night at Calcinate airfield, in presence of FAI Executive Director Alvaro de Orleans Borbón and FAI Secretary General Susanne Schödel, who handed out the medals to the winners. Other personalities such as Maria Ida Piazza from the Sports Council of the Varese Municipality and Renato Scapolan President from the Chamber of Commerce also attended the event.

The 6th FAI World Sailplane Grand Prix Championship was one of the three competitions selected in 2015 by FAI’s official sponsor, the specialist of technical watches Breitling, for full branding and support, together with the 28th FAI World Aerobatic Championships in Châteauroux, France, and the 59th Coupe Aéronautique Gordon Bennett in Pau, also France.

About the FAI Sailplane Grand Prix

The FAI Sailplane Grand Prix makes the sport of gliding more accessible and physically visible to the general public while the scoring system allows spectators to easily see who has won, as the first sailplane crosses the line in front of them.

A series of qualifying events is run in different countries over a period of approximately a year and as the finale features the top two from each qualifier, it is truly a test of champions. Entries are usually limited to 20 participants, since everyone starts at the same time and may fly round and arrive very close together and very fast. Races may be routed over or close to the airfield more than once to give spectators the chance to see the race played out before their eyes. During the time the gliders are away from sight, tracking equipment carried in the gliders enables a real-time film of their positions and the ground they are covering to be sent back onto giant screens or computers at the airfield and on internet, therefore truly involving the maximum number of people in the excitement.

The winner is the pilot who, over the period of a week’s competition, has amassed the highest number of points overall. He becomes the FAI Sailplane Grand Prix World Champion.