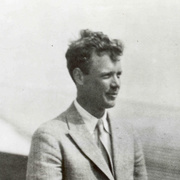 Charles Lindbergh was the first pilot to fly solo from New York to Paris. He completed the flight over two days, 20/21 May 1927.

In doing so he set an FAI World Record for ‘Distance in a straight-line without landing’. He flew a specially-built Ryan Monoplane, the Spirit of St Louis, 5,809km, and completed the flight in 33hr30mins.

He flew alone, through the night, navigating only by the compass, stars and dead reckoning.

Taking off from Roosevelt Field near New York early on Friday 20 May 1927, he was loaded down with 1,704 litres of fuel. His plane climbed slowly into the air, clearing the telephone lines at the end by a mere six metres.

From there he headed east, flying as high as 3,000m to clear storm clouds, and as low as 3m, skimming across the wave tops. He flew part of the flight blind through fog for several hours.

The 25-year-old former barnstormer pilot became an international celebrity overnight, and was feted around the world. He received the French Legion d’Honneur and was awarded the USA’s Distinguished Flying Cross.

Lindbergh’s flight was ratified by the FAI, the World Air Sports Federation, which was then 22 years old.

Lindbergh went on to tour the world telling his story of his Atlantic flight. In his later years he became a prolific prize-winning author, international explorer, inventor, and environmentalist