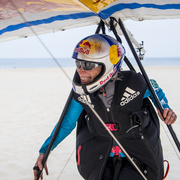 Corinna Schwiegershausen was born in Bremen, Germany in 1972 and took up hang gliding in 1991. She has been FAI Women's World Hang Gliding Champion four times.

"My father started the sport and I immediately wanted to go flying as well," she has said. "It just felt natural for me. I love to be in the air, that is my element. Competitions are just a good excuse to spend more time up there."

After completing a degree in graphic design she moved to Munich to be closer to good flying sites. She quickly rose through the competition ranks and won her first FAI World Championship gold medal in 1998.

Her advice for new competition pilots is straightforward. "Be prepared – get the best equipment possible and test it before the comp, so you know you are comfortable and safe.

"Also look into the psychological sides of a long, exhausting comp. Learn to admit that you make mistakes, analyse them to improve your skills, and then forgive yourself. And try not to make the same mistake again.

"Look at the other pilots with respect and see them as your friends. They will help you find thermals, learn fast and get better. I also never forget that there are, and always will be, pilots with much better skills than mine. It is great to always keep learning!

"Finally, always be humble and happy that every day you have the privilege to spread your wings and fly."