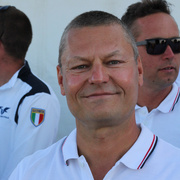 Ferenc Toth has been at the top of his game since winning his first major competition in Glider Aerobatics in 2000, aged 32. That was the FAI European Aerobatic Glider Championships, held in Provence, France, and it was a close battle between him and Jerzy Makula – the ‘grandfather’ of glider aerobatics – for the top spot.

Three years later he won the ultimate prize – the FAI World Championship gold medal, when he again battled it out with Makula for the first place on the podium. Since then his form has barely wavered – he has been on numerous podiums at major international competitions since.

Toth competes in the Unlimited Class of Glider Aerobatics, flying a Swift S-1, a dedicated solo aerobatic glider. A classic, it is considered the ultimate competition wing for glider aerobatics.

Besides a good glider, what is his secret, what makes him so good? “I think my secret is I can concentrate during my flights," he says. "Everyone is nervous in competition, of course, but when I am in the aircraft, before release, I can concentrate for the next four of five minutes. I am clear in my head.”

Toth started flying gliders in 1986, and spent nearly the first decade of his flying career in standard gliders. But he always thought he would enjoy aerobatics.

“I became an aerobatic pilot in 1995,” he says. “Everybody starts with the standard glider, looking for thermals and flying. But aerobatics pilots need more adrenaline, more challenge.

“When I was a young pilot with only two years’ experience I wanted to do something more. Nobody forced me, nobody pushed me, it was just a feeling from inside.”

That “feeling inside” has motivated him throughout his career. He has been an instructor, an aerobatics coach and a team trainer as well as a power precision and glider cross country pilot.

A professional airline pilot he switches to aerobatics at the weekend. “In my job I am sitting in the cockpit pushing buttons. But when I’m in the glider yes, this is flying.”

He adds: “When I’m training I’m happy. When we are flying in the air everybody has the same feeling – of freedom and being happy.”