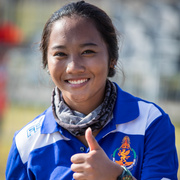 Janejira Chui-Noei was introduced to the sport of Paramotoring by her father when she just 11-years-old. “My father flies paramotor. I liked the look of it, and I tried it,” she says.

It turns out she was good at it too. After learning how to handle the paraglider on the ground and familiarising herself with the equipment under instruction, she finally took to the air, while still not a teenager.

She loved it immediately. Now when she and her father race against each other, she beats him. “It makes him sad!”

Janejira, known as Gege to her friends, first competed internationally at the Asia Oceanic Paramotor Championship in 2015, where she was the only woman to take part. She made her debut on the world stage at the FAI World Air Games Dubai in December 2015.

Then in 2016 she competed in her first FAI Paramotor World Championships, in England. She was still only 13-years-old, but she won Bronze in the Women’s competition. She was given special dispensation to compete at such a high level at such a young age.

Paramotoring in Thailand is popular but fragmented. “There are different groups around the country,” she explains. “I live in Bangkok, and it is a big city, it’s a capital city. We have a small area to fly there, but we have to go out of the city really to fly.”

Some parts of Paramotoring competition involves demonstrating skills close to the ground, and it is these elements that she excels at. “My best task is slow/fast, and also football,” she says.

In the Slow/Fast task pilots must navigate a course as slowly as they can in one direction, before turning around and flying back as quickly as they can. In Paramotor Soccer, pilots must fly a pylon course before coming back in low and slow and kicking a ball. The tasks test precision flying.

In 2017 she competed in the Paramotoring event at The World Games in Wroclaw, Poland, where she was one of three Thai pilots to compete.