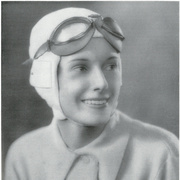 Jean Batten was the first women to be awarded the FAI's highest award, the FAI Gold Air Medal. Awarded in 1937 she won it for the remarkable feat of flying solo from England to New Zealand – the first person ever to do so.

She was 27-years old when she made the record flight, which took her a total of 11 days 45 minutes.

Born in 1909 she moved to London in 1929, where she enrolled in the London Aeroplane Club. She took her first solo flight in 1930 and earned her private pilots licence by 1932.

Her first big solo flight trip saw her fly from England to Australia in May 1934 in a Gipsy Moth in 14 days 22 hours. The achievement brought her success: trophies, sponsorship and a publishing deal.

In 1935 she set a second world record flying from England to Brazil piloting a Percival Gull Six.

The next year she completed her record solo flight from England to New Zealand. She took off from Kent, England at 4.20am on 5 October 1936. She crossed Europe, the Middle East and Asia before arriving in Darwin after only five days and 21 hours.

Three days later on 16 October she took off from Sydney to fly to New Zealand. She arrived in Auckland after ten-and-a-half hours. She had flown from England to New Zealand in 11 days 45 minutes.

Worldwide, she became the most famous New Zealander of the 1930s. She is still recognised as a heroine in her native country today.

Her flight earned her many global prizes and awards, including the prestigious FAI Gold Air Medal for 1937.

As recorded in the minutes of the FAI Conference from that year, Colonel Walaardt-Sacré from the Royal Netherlands Aeronautical Association explained why: "She has demonstrated what can be asked of aviation today if it is approached scientifically. She has surprised the masses and at the same time given them confidence in aviation."

He continued: "In our opinion, she has thus been able to contribute strongly by her actions, her work, her performance, her initiative and her dedication, to the progress and development of Aeronautics. She is therefore worthy of receiving the highest honour that the FAI can award – the FAI Gold Air Medal."

World War Two brought her aviation career to a close. After the war she travelled, before retiring to the island of Tenerife. She died on the island of Majorca in November 1982, aged 73.