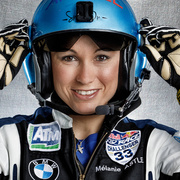 Mélanie Astles is a five-time French Aerobatic Champion who earned Top Ten rankings at the World and European levels before starting to compete in the Red Bull Air Race. By the end of her debut Challenger season in 2016 she'd added a racing podium to her resume – second place at the USA’s iconic Indianapolis Motor Speedway.

Her story is one of passion, persistence and overcoming the odds. Brought up in the south of France, she left school at 18 to enter working life. She became manager of several gas stations and saved money for flying lessons. Aerobatic trainers recognised her ability, and Astles traded work at the airfield for lessons. In her very first year of aerobatic competition (2007) she clinched a victory at the French Cup in the Espoir (Hope) category.

Over the next few years she moved up through the categories, winning national championships, the designation of High-Level Sportswoman from the French Ministry, and a place on the French National Aerobatic Team. In 2014 she finished seventh at the World Advanced Aerobatic Championships and first in the Women’s ranking. In 2015 she was ranked fifth-best female pilot in the world in the top aerobatic category – Unlimited – and was a member of the French team that won the Unlimited Aerobatic World Championship.

Astles credits her success to hard work. When she turned her focus to racing for the Red Bull Air Race Challenger Cup in 2016, her persistence and dedication resulted in her history-making podium at Indianapolis. Across disciplines, she now has more than 4,000 hours of flying time.