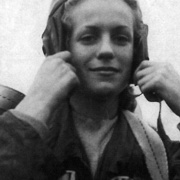 Monique Laroche was a parachutist who learned to jump aged 16 from the 25m training tower at Porte de Choisy.

On 6 October 1951, aged 22, Laroche set the first ever FAI parachuting record. She exited the Morane-Saulnier MS 230 aircraft at 4235m, freefalling for a total of 3622m, and opening her parachute 400m above the ground over St. Yan airfield, France.

Laroche followed up her new record with a visit to the first World Parachuting Championships in Bled, Yugloslavia (now Slovenia). Her performance made her the first world champion in parachuting accuracy. She went on to win further medals, including champion of France - beating all the male parachutists - at St. Yan in 1953 and world champion in 1954.

To fund around 200 jumps per year she appeared at air shows, pulling her cord at the last possible moment – without using an altimeter – to wow audiences. A true pioneering spirit, Laroche’s achievements contributed to the gathering momentum of parachuting as a sport, which in turn led to the development of skydiving and other associated sports such as canopy piloting, speed skydiving and wingsuit flying.