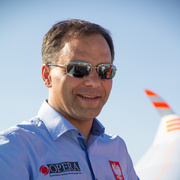 Sebastian Kawa is one of the most accomplished glider pilots in the sport. A multiple FAI World Champion and FAI European Champion he has excelled in all classes of gliding since the turn of the century.

However, his competitive roots lie not in the air but in the sea. From the age of 8 to 18 he sailed competitively at national and international level for Poland.

He took up gliding in 1988 aged 16 and within two years had clocked up 200 hours, as well as reached milestones like completing a 3,000m gain-in-altitude and a 300km triangle flight.

After winning the Polish Junior Gliding Nationals in 1992 he gradually climbed the ladder of elite glider racing. His first international podium came with a Bronze medal at the FAI World Gliding Championships in 1999. He won his first FAI World Championship in 2003.

In 2005 he was ranked number 1 in the world for the first time. He spent the next decade at number one or number two in the world rankings, and dominated the elite level of competition.

In 2011 he published his autobiography, a Sky Full of Heat, in Polish and English. An active coach, teacher and trainer for all levels of pilot, Kawa revealed in his autobiography that it takes, "10 years of maximum concentration and effort to get to fly against the masters".

As well as competing around the world, he has pushed the boundaries of gliding flight with high-altitude flights above Aconcagua (6,962m) in Argentina, and in the Everest region of Nepal.

A qualified medical doctor he is married with two children.