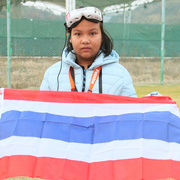 Female FAI World Drone Racing Champion 2019 - and 2018 - Wanraya Wannapong, who goes by the name “Milk” when she is racing, is one of the youngest, and most successful competitive drone racers in the world.

The Thai schoolgirl, who lives in Bangkok with her parents, took up drone racing at just eight years of age. Stoic under pressure, she successfully defended her 2018 title at the FAI World Drone Racing Championship Grand Final 2019, held in Xiangshan Ningbo, China in December of that year.

Speaking at the 2019 event, Acting Secretary General of the FAI Markus Haggeney said: "Congratulations to the impressive young Thai pilot Wanraya Wannapong, who is now an FAI World Champion for the second time at just 12 years old."

Her other victories include the 2018 China Drone Racing Open, held in Shenzhen, China in May 2018, where she was the overall winner.

“I am very happy,” she said after claiming the gold medal at that event. “I was nervous going into the final, especially as in the last minute my battery power died on my controller, so I had to plug in to a mains supply, that was nerve-wracking. But now I have won I am very happy.”

Her overall goal is to become the overall FAI World Drone Racing Champion, a dream supported by her father, who practises with her in the family’s training field in Thailand.

And she certainly has the motivation to get there! “I fly every day, and all day when I am not at school,” Wannapong added.