Today, marks the 10th anniversary of Pauline Baker's record hot air balloon flight. On 24 January 2008, the Irish pilot broke the female altitude FAI World Records in class AX-03 (Hot-air balloons: 400 to 600 m³) and AX-04 (Hot-air balloons: 600 to 900 m³) after taking off from Mondovi (ITA) and reaching the altitude of 4272m. The records are still standing.

Due to the small size of Pauline’s balloon (an 21A), it was decided that Paolo Bonanno would fly alongside to carry the transponder and the VHF radios.

Here is the story of the record flight as told by the team:

“The two balloons were prepared and inflated. The 21A was flown with the lightweight Boland basket, Cameron mini-Mk4 burner and two 60 litre titanium tanks, one with 30% content for the landing phase. As a weight reduction measure, the support poles for the burner were plastic wiring conduit, much lighter than their regular solid nylon counterpart! A Flytec 3040, with envelope temperature sender, was attached to the balloon, although earlier tests in Paulo's workshop questioned the accuracy of this device. A test rig was built to test the sender against an engineering thermocouple and the Flytec always managed to read extremely low (100 deg vs 125 deg and 150 deg vs 190 deg). At 14:30, Paolo launched with Pauline shortly behind. Frequent calls were made to Pauline to report on envelope temperature as she was climbing at 500 feet per minute (fpm) in the early stages. Due to the mild conditions, the envelope temperature was higher than was comfortable, so Pauline was requested to slow the climb. Despite a climb of 750 fpm at one stage, when Paolo ascended to within inches of Pauline's basket, her climb rate was slowed to around 200 fpm where a stable envelope temperature could be found, taking into account possible errors in the reported temperature. 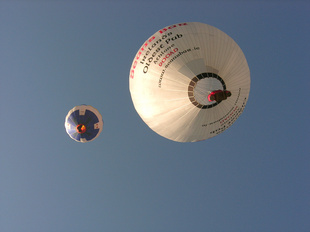 Due to the slow climb, and the mild conditions, Pauline's fuel tank started to register before reaching 10,000 feet. As it was clearly not possible to attain 21,000 feet (we had been given clearance to 22,000 feet) it was decided to climb to a comfortable margin to break the AX-3 and AX-4 female altitude records and then descend. The FAI requirements are to exceed the previous record by 3% on altitude flights (1% on distance and duration). At around 14,000 feet, Pauline started her descent, dropping at around 8-900 fpm before levelling off just above the surface. Despite the climb to over 13,000 feet, the two balloons landed 30 feet apart, less than half a mile from where they took off.”

Since getting her licence in 2004, Pauline Baker has broken 10 World Records - seven of which are still valid - and holds an incredible 95 Irish Records in Hot Air Ballooning. She was awarded the Paul Tissandier diploma in 2008 in recognition of her remarkable services to aviation and aerial sports, in particular Hot Air Balloons.

These inspiring words from Pauling summarise her passion for hot air ballooning: "When you take off you don't know where you are going to land or who you will meet when you get there, so this to me is the best and most enjoyable form of aviation."