1985-2014 : The Two Stories of the Exceptional Pilots Who Flew Over Himalaya on a Glider

Ever since the 19th century when Europeans were increasingly present in the region, adventurers coming from all around the world strived to understand its culture and conquer its vast lands and high summits. The tops of Kamet, Minya Konka, Kabru and Annapurna were the first to be reached in the 30s and early 50s, and in 1953 Sir Edmund Hillary and his Sherpa Tensing Norgay ascended the tallest of them all, the Everest. The immense worldwide impact of their successful expedition, which instantly made of Hillary and Tensing Norgay living legends, contributed to fuel the myth of the Everest and of the whole of Himalaya. Since then, all the mountains of the Himalaya chain have been climbed and thousands of hikers and trekkers come to Nepal every year in search for adventures and challenges.

But the fascination for the Himalaya carries far beyond mountaineering.

Just as Tensing Norgay who titled the account of its trip with Hillary “A Dream Comes True”, aviators also had theirs to accomplish. As early as 1933, thus 20 years before its overland conquest, a formation of aircraft from the Houston Everest Flight Expedition flew the top of Everest and over the Himalaya.

The gliding community were not to be outdone, though it took until 1985 to see the first motor glider, a Valentin Taifun 17E, fly over and across the Himalaya with the authorisation of Nepalese Authorities. To achieve this unprecedented exploit, Spanish FAI Director, engineer and pilot Alvaro De Orleans Borbon teamed up with leading aviation authorities such as Dr. Manfred Reinhardt from the DFVLR (now the German Aerospace Center - DLR). As this adventure was a dream, yes, but a purposeful one, the expedition also included NCAR meteorologist and atmospheric scientist Dr. Joachim P. Kuettner, who famously headed the Mercury space project which led to putting the first American Alan Sheppard into space and Dr. Bruno Neininger from ETH - Zürich, who later became a leading expert and operator of advanced atmospheric and remote sensing platforms aboard small aircraft. Indeed, above the pure adventure and technical exploit stood scientific objectives improved meteorological knowledge thanks to the electronic recording and precise measures of altitude, position, temperature, humidity and wind above the Himalaya: “Installing the most advanced navigational equipment available at that time in a small plastic aircraft had never been attempted before and taming the unexpected electronic interferences took weeks and required more art than engineering”, recalls De Orleans. 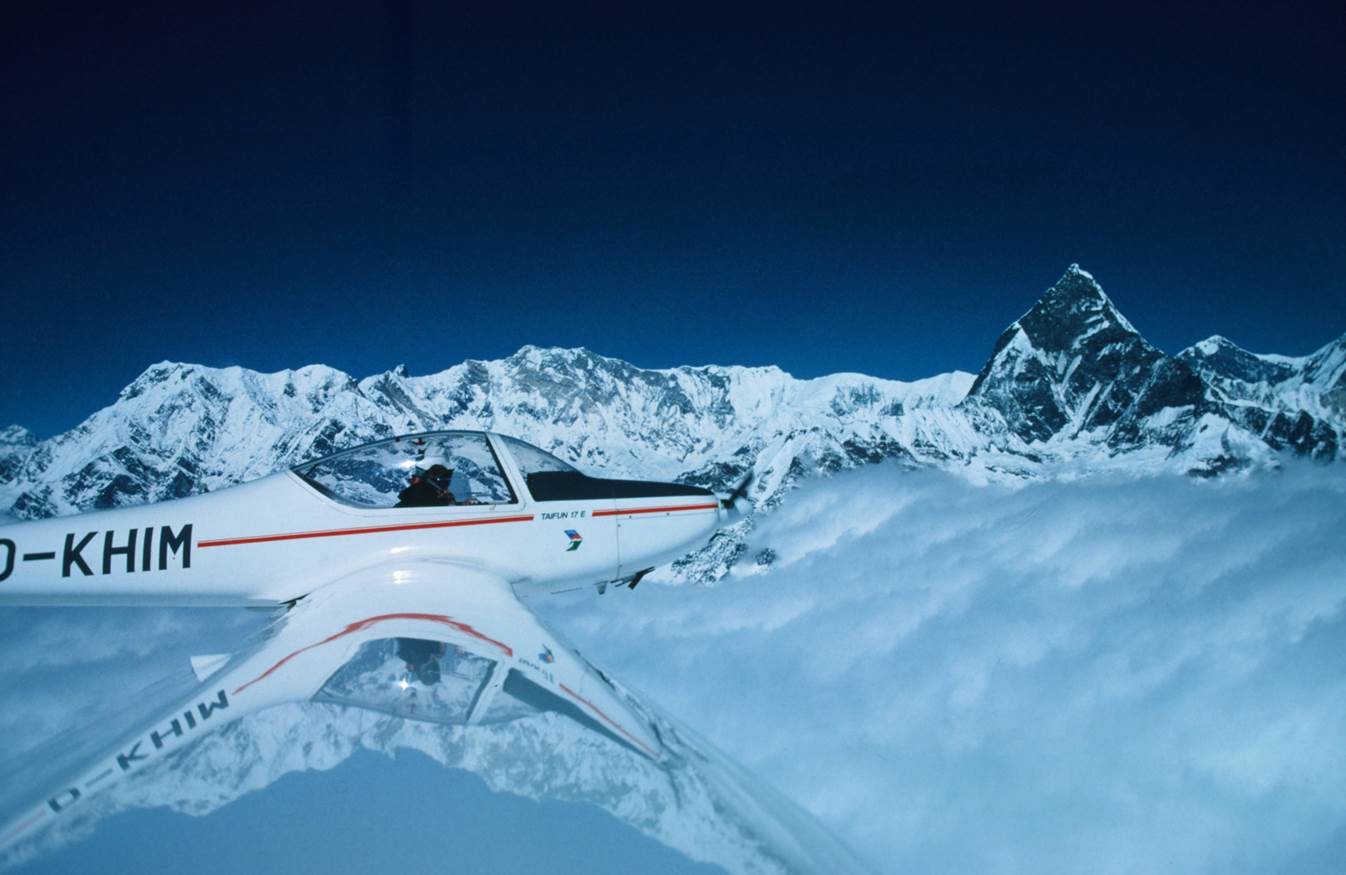 The next gliding flights over the Himalaya took place almost 30 years later in January 2014, when a far more ambitious expedition, the Mountain Wave Project (MWP/OSTIV - Organisation Scientifique et Technique Internationale du Vol à Voile), performed an airborne measurement campaign. The challenge was to fly for the first time with two motor gliders over the Annapurna - Everest region and the exploration its diurnal wind and lift systems. The flights were successfully performed by three German pilots: multiple world record breaker Klaus Ohlmann, Jona Keimer and MWP Director, GEO-specialist Rene Heise. One of the scientific goals they achieved is the first advanced digital aerial imagery campaign carried out in this region, in collaboration with the German Aerospace Centre (DLR): several areas, including Kathmandu and the Everest were translated into virtual high resolution 3D-terrain models for security research, whose aims include the creation of a high resolution database by monitoring glacier changes and thus helping research about global warming, as well as predicting flood impacts and improve disaster response. This expedition also included high altitude physiology research with the Centre for Air and Space Medicine of German Air Force to answer the question of early detection of oxygen deficiency for pilots in a cockpit (in-flight measurements). As a basis for planning flight over the downdraft risk area over the mountainous area of Himalaya safety was used a new high resolution weather forecast model with turbulence parameters and vertical wind patterns.

The fabulous images of the Mountain Wave Project are shown in a film, whose premiere took place a few days ago in Berlin. FAI Director Alvaro De Orleans, who closely followed these outstanding achievements, was among the string of aviation personalities attending at the event. He commented:

“The beautiful film strongly enhances the value of the expedition, because it inspires many more young people to dream about such scientific adventures; ultimately, such attitudes translate in higher, country wide rates of innovation, a socially and economically very valuable outcome.”

As for Rene Heise, he emphasised the appropriate role of OSTIV to exploit synergies of air sports and the sciences regarding the exploration the atmosphere and ecological monitoring for sustainable research as well as developments.

The story of gliding in the Himalayas is yet to continue, and we can only hope that these fabulous “useful dreams”, as De Orleans describes them, will induce other pilots to achieve outstanding performances while pursuing scientific progress.

The film of the MWP expedition, "Von Strausberg zum Mount Everest - Forschungsabenteuer im Hightech-Segler" is currently available in German on the internet:

An English translation is underway and the DVD of the film will soon be available.