FAI has received the claims for the following paragliding world records:  Speed over a triangular course of 300 km with the performance of 28,6 km/h and Distance over a triangular course 308,9 km, made by Maxime Pinot (France) over a route of Saint-Hilaire - Chalencon - Estrop - Saint-Hilaire (France). We have contacted the pilot to find out the details, and present the hero to your attention. 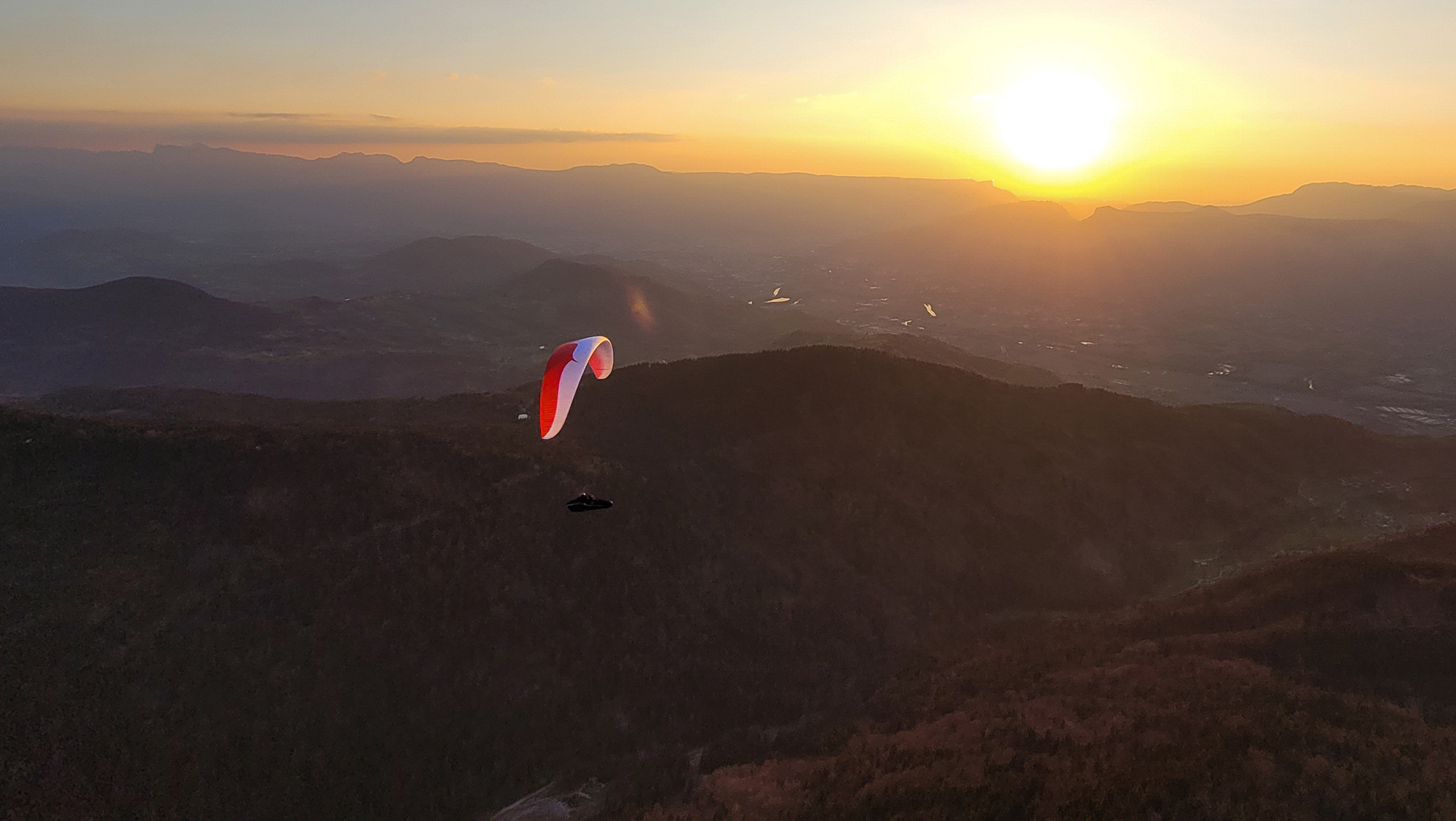 I'm flying paragliding for 16 years now. I started flying at 13.

My father was flying. I started with tandems with him and did a lot of ground handling, waiting for the legal age and being heavy enough to start solo.

Where did you learn to fly?

I started in the French Jura hills, mount Poupet.

I've always been fascinated by the great champions and their abilities to make the best out of (nearly) every situation. In paragliding Chrigel Maurer, Charles Cazaux, Stefan Wyss. But I'm a big fan of other sports: Martin Fourcade and Johannes Thingnes Boe (FAI: Biathlon) for example.

What were your achievements, titles before breaking a record?

We work on this triangle for one-two years. And this day came, and the French team leader Julien Garcia said: "Ok let's try to set a new World Record". St Hilaire is a very good place in April because it's usually unstable very early in the low layers. Later in the year, it's less effective.

We can't even compare. 18 years between both records... The equipment is so much more performant. The knowledge also, especially on flying fast, is not the same. Pierre's performance was really huge.

How long have you been flying in this area?

I know very well the French Alps now, even if the westerly part of this flight was quite unknown to me.

We were watching this weather window for a week before. I warned some pilots Frome the French team that there could be a D-Day at this timing. And the day before, we've done a lot of planning.

We had a try last year but the day ended too early, and the beginning was way too stable.

Who worked with you during preparation?

Julien Garcia was doing all the paperwork (before and after), and the pilots involved were all very strong pilots: Jonathan Marin, Honorin Hamard, Andy Tallia, Stéphane Drouin, Laurie Genovese, Baptiste Lambert.

Tell us about the flight.

It was of course foot-launched. The beginning was quite good on the east faces of Chartreuse and then Vercors. The Diois was really booming with nice clouds. Same for the Monges and la Blanche. We flew very fast the 6-7 first hours, like 34 km/h average speed. But then NW wind and a lot of shadows made it more challenging in Champsaur and Valbonnais, the last one being always tricky because the valley breeze is always strong.

Finally, we were just in time with Jonathan for the last thermal in Chamrousse, because Laurie and Baptiste, 5 minutes before weren't able to climb because of sunset.

You can find the flight on Xcontest by this link 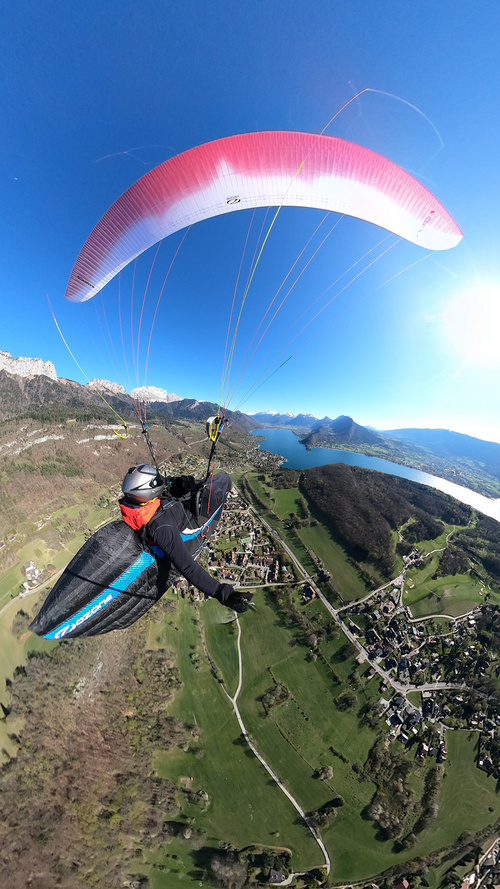 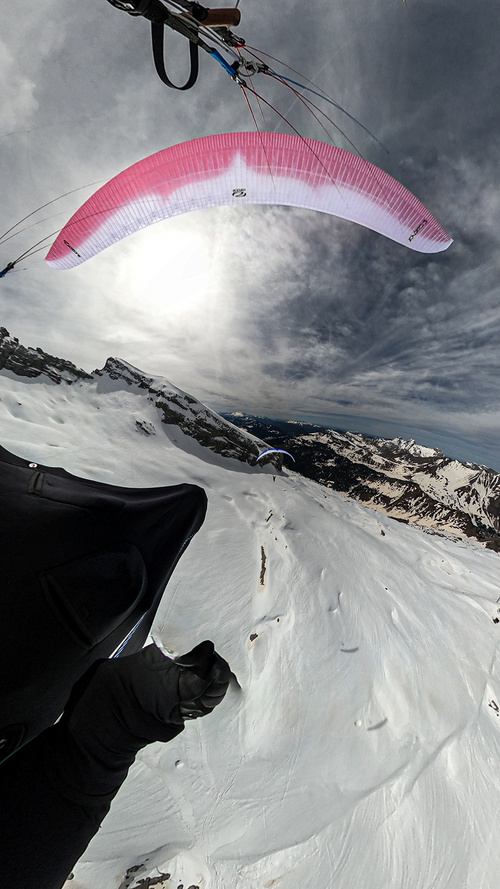 The Valbonnais area for sure, with the strong NW wing. This place is a corner of the French Alps so both north and south winds get stronger here. It's most of the time a bit messy.

Never. Just get a bit tired after 8h because I was pushing a lot in front we were able to go fast. So I needed to reconcentrate at some point.

Was there something unexpected?

The usual things in cross country. Sometimes, you have to use plan B or C. It was the case in the shadow at some point.

What were you eating and drinking in flight?

Some water with an energy drink, a sandwich, and 2 or 3 bars. Actually, it was probably not enough, even more, because it was quite cold and you burn a lot of calories. But eating and drinking while flying fast is not always easy.

We celebrated with Jon because we landed together. No special celebration, just happy to have enjoyed great XC conditions.

The Red Bull X-Alps for sure. It's taking so much of my time.

Having a big volume of flying is giving you wings for sure. Prior to that flight, since the beginning of March, I flew around 80 hours, in all conditions. I feel always very strong in the air when I can put on a lot of volume when the season kicks off.