Outstanding pilots and pioneers from across the global air sports arena were celebrated last night at the 2017 FAI Awards Ceremony in Lausanne, Switzerland. The event was graced with the presence of several high profile guests, including Dr Thomas Bach, President of the International Olympic Committee (IOC). 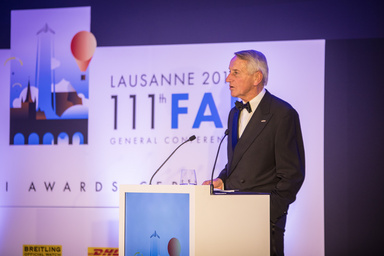 The ceremony marked the start of the 111th FAI General Conference, which takes place in Lausanne on 26 and 27 October 2017.

FAI President Frits Brink presented more than a dozen awards to outstanding pilots and air sports supporters from around the world.

Opening the ceremony, Frits Brink told the audience: “The awards ceremony is where we can take time to recognise the people who have done the most, perhaps gone beyond the call of duty, in aviation, space and air sports.”

“The FAI Medals and Diplomas create an unrivalled roll call of historically important men and women, without parallel in air sports.” 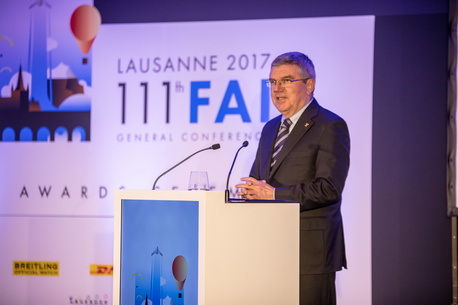 The presence of the IOC President Dr Thomas Bach prompted Frits Brink to reflect: “Lausanne is the home of FAI, and a spiritual home of competitive sports, both on the ground and in the air. We are happy to embrace the ideals of the Olympic movement, and welcome members of the IOC to our table.”

Dr Thomas Bach said: “My heartfelt congratulations to all the winners of tonight’s awards”.

A special award, given by the Charles and Anne Morrow Lindbergh Foundation, was presented to Bertrand Piccard and André Borschberg who flew around the world aboard their solar-powered aircraft Solar Impulse. The two pioneers received one-off “Spirit of St. Louis – Tingmissartoq” medals from Foundation Chairman John Petersen. 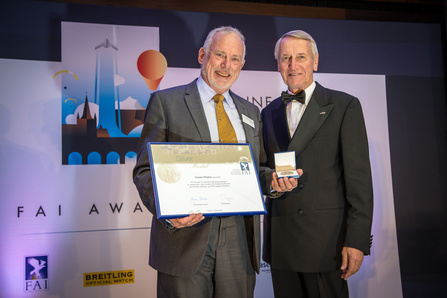 Graeme WINDSOR (Australia)
For his major involvement in FAI and parachuting as, among others, Jury President, FAI Commission President and President of Honour, and FAI Companion of Honour.

FAI BRONZE MEDAL
Tengku ABDILLAH (Malaysia)
For his eminent services to the FAI as Regional Vice President for East and South East Asia, and his contribution to the growth of air sports structures in this region.

Russia - Anatoliy SYRCHIN
For his remarkable services to Aviation and Sporting Aviation.

Russia - Viktor DEGTYAR
For his remarkable services to Aviation and Sporting Aviation.

ANGELO D’ARRIGO DIPLOMA - Environment
Siemens & Extra (Germany)
For their significant contribution to respect for the environment within air sports via the creation of the Extra 330LE, an aerobatic plane re-engineered with a Siemens electric engine.

ANN WELCH DIPLOMA - Microlights
Jan BEM (Czech Republic)
For his FAI World Record of 13min 7sec as Time to climb to a height of 6,000m on 2 February 2015.

LILIENTHAL GLIDING MEDAL - Gliding
Patrick PAUWELS (Belgium)
For his lifetime contribution and dedication to the sport of gliding and his long national and international service during several European and World Championships as steward or chief steward, among other duties.

PEPE LOPES MEDAL – Hang Gliding and Paragliding
Ben PHILPOTT (United Kingdom)
For the exceptional character and sportsmanship shown by his actions in assisting a fellow pilot in critical circumstances, despite having suffered a traumatic experience.

Special award from the Charles and Anne Morrow Lindbergh Foundation

SPIRIT OF ST. LOUIS - TINGMISSARTOG
Bertrand PICCARD and André BORSCHBERG (Switzerland)
For their extraordinary accomplishment of successfully circumnavigating the earth in their solar-powered aircraft Solar Impulse.

All the pictures of the ceremony are available on Flickr