On the occasion of the 55th anniversary of the first flight of the modern hang glider, Pat Crowe's role in driving the boat that towed the revolutionary new aircraft was recognised with the presentation of the FAI Hang Gliding and Paragliding Diploma.

Pat (shown above on the left)  was presented the award in Grafton, Australia - the location of the original event - by Paul Green (above right), President of the Hang Gliding Federation of Australia. A morning tea was held in Pat’s honour, with the presentation followed by a question and answer session in which the historic day that became the foundation of modern hang gliding (8th September 1963) was relived through Pat's shared memories.

The designer of the original hang glider, John Dickenson, was a special guest at the commemorative event and congratulated Pat on his award. John (below, left), received the award in 2007 and holds an FAI Gold Medal for his extraordinary design which has made hang gliding the sport that we recognise today. 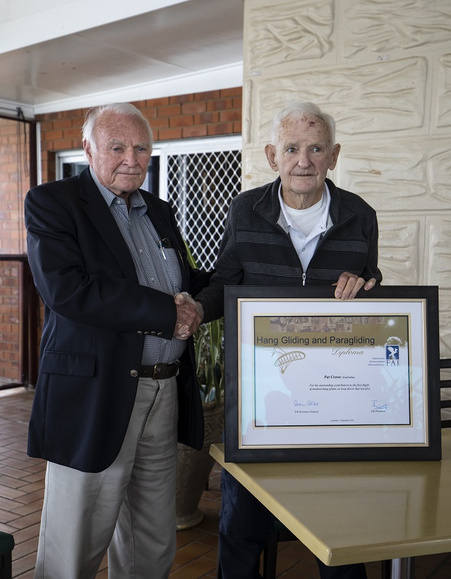 Later, as part of the 55th anniversary event held at the old Water Ski Club in Grafton, John was proud to once again to be photographed at the helm of his Mark 3a wing (the third version of his ground-breaking design) which was revealed from its packaging for only the second time after its final flight, 46 years ago. This was the only exhibition of this historic aircraft outside of a suitable museum, so it was a particularly rare opportunity for the enthusiastic crowd to view the pioneering design.

History came alive for those gathered at the event as they were also able to view genuine original water ski kites and gliders being flown by a small team of pilots, another rare occurrence for air sports devotees. 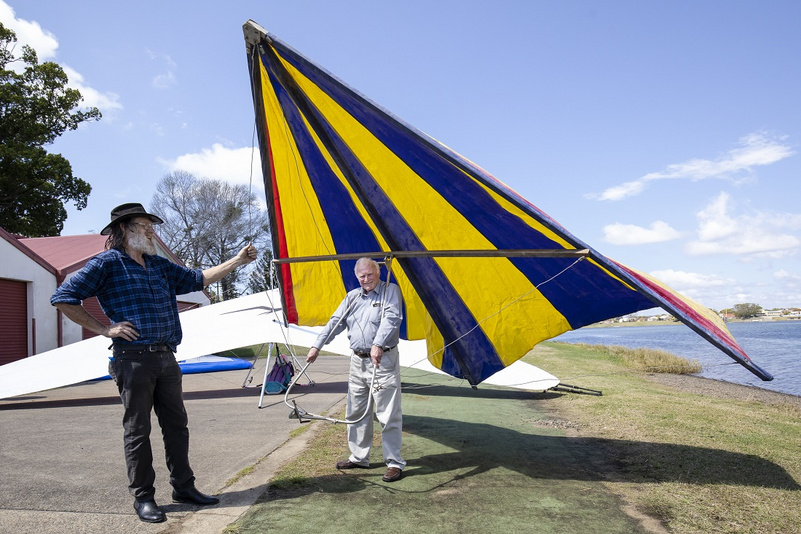