As predicted, on Friday  the rain front arrived in Vrchlabi. The slope for the second run of giant slalom had been prepared overnight and the race was started early morning as planned. In spite of the difficult snow conditions and rain/ fog decreasing visibility, all the competitors finished the race with still the favourites at the top of the ski result list. 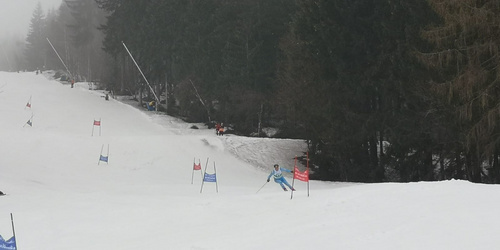 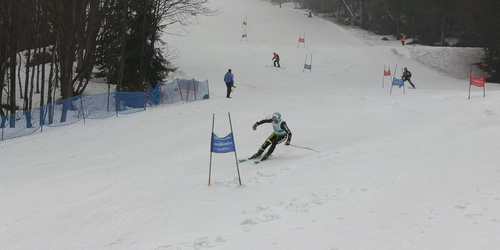 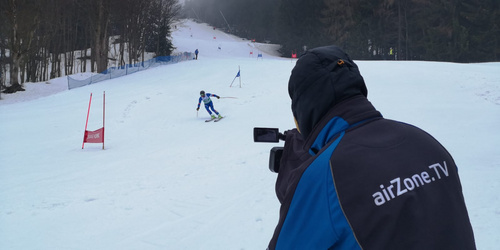 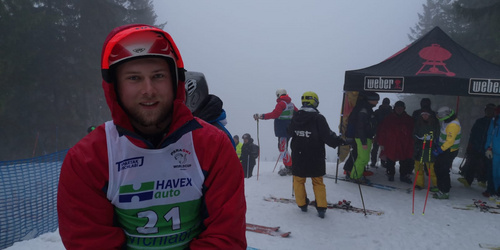 The winners of the female and male ski race are the current FAI Para-Ski world record holders, Magdalena Schwertl and Sebastian Graser from Austria. Because these two also had good results in the first five accuracy landing rounds, they are now leading in the interim combined result list.

Result lists after 2 skiing runs and 5 rounds of accuracy are here http://results.worldskydiving.org/FrontEnd/CompetitionCollection/1022

There are still two jumps to be made (6th round and individual final) before the official end of the championship, which is scheduled not later than day 4, Saturday 2nd March 2019 at 2pm and the scores in centimeters out of these jumps will be added to the total points to determine the champions.

After the race, the Meet Director called for a team leaders' meeting at 1 pm with the option to start the helicopter in the afternoon, just in case the weather improved. But the forecast was right, the rain front is moving slowly to the east, but will not leave Vrchlabi before late night or tomorrow morning.

So Saturday, early morning, 9am, will be the next try to start accuracy landing at the Bubakov target area.

As there was enough time in the afternoon, the chair of IPC Para-Ski committee, Michael Egger used the opportunity to conduct the competitors meeting.

Together with his present committee, Vice Chair Henny Wiggers,  and members Günther Berendt, Mark Potapov and Gernot Rittenschober, Michael opened the meeting and explained the importance. He emphasized that the committee is here to work for the competitors and if there is room for improvement, it should be addressed at the meeting.

Quite a number of present competitors attended the competitors meeting and in a friendly atmosphere the future of Para-Ski was discussed.

Michael presented the number of participants/ nations of Para-Ski FCEs in recent years and mentioned, that he is happy about the increase of junior participation. Michael also thanked Franz Singraber for all the work he had done and the time he had spent with the scoring system, the official online FAI result list and the FAI world ranking list.

He then explained the FAI world ranking list and the requirement to hold a FAI license at all FAI sanctioned events. By FAI rules, this applies for all First and Second Category Events but also to participate at Nationals and especially to establish FAI records, a license is mandatory.

The preliminary Para-Ski calendar for 2020 season was presented, the PS Worldcup Series as Second Category Events will probably have competitions in Italy, Germany and Austria but also the Czech Republic and Switzerland are interested to host one   In August 2019 the calendar will be finalized and officially published on the event calendar of FAI www.fai.org/commission/ipc  and also at www.paraski.org

Then Michael opened the floor to discussions about the current competition rules.

Another item was the course setting in giant slalom, some competitors expressed their concern with gates set too close to each other, so the race would be closer to a slalom than giant slalom and this has an impact on the type of skies that are used.

There is an ongoing discussion about the scoring of skiing in relation to accuracy landing results.

It is a fact that the performances in accuracy have improved over the last 25 years since the the current 3cm per second factor was introduced, so in the opinion of some nations, it is giving too much weight on skiing, especially in team events. Other competitors expressed their wish to keep the current 3cm factor and stated that everyone can train hard to improve their skiing time in the same way as training in accuracy precision.

There was a lively discussion with several points brought up from the floor, among these how to find new participants by attracting skiers or skydivers or how to motivate older competitors to stay in the game if they lose too many points in skiing. The proposed change will still reward good skiers, but also leave a chance to improve the ranks with good accuracy landing results and might attract people from the parachuting world to train in skiing.

The committee will discuss the proposal to change the factor from 2020 onward to 2cm for each second behind the winner.

And finally in the discussion of re-naming Para-Ski to attract the Media and not to be mixed up with Paralympic sports, several proposals were brought up. Any good ideas are welcomed by Michael Egger, but there also were voices to keep the naming because whatever we call Para-Ski we still have to explain what we do.

After almost two hours Michael concluded the competitors' meeting 2019 and wished everybody good luck with the weather on Saturday morning and good results.

Take a look at the video from the day :  https://www.airzone.tv/ms-v-para-ski-2019-sestrih-3-soutezniho-dne/