On 13 September 2016, at the FAI World Parachuting Championships Mondial in Chicago, USA, Swedish speed skydiver Henrik Raimer landed after a jump with no idea whether it would place him at the bottom or the top of the results table.

“I had total focus on stability (not speed) on that jump and it was very stable. I remember when I landed, and my team-mates asked how it was. My response was that either it was super slow or super fast. It ended up being super fast!”

This jump, measured on a barometric SMD, made Raimer into a world record holder, the first person to break the 600mk/h mark with an impressive 601.26 km/h.

A skydiver since 2007, Raimer fell in love with the sport despite an unmemorable first jump; it was more the community atmosphere that drew him in.

Speed skydiving was a very new sport in Sweden at that time, having held their first Nationals in 2005, so it wasn’t until he was much more experienced as a skydiver that he became interested.

“I did my first try at speed skydiving in 2013 after encouragement from my friend Daniel Hagstrom. Then 2014 was the first season I started training and that year I competed in Swedish Nationals, British Nationals and at DIPC5.”

Speed skydiving is the fastest non-motorized sport in the world and was recognised by the FAI in 2014.

“Everything goes really fast but at the same time, slow. Like the earth is pulling you towards it.”

Raimer continues to compete, recently taking a silver at the Mondial in Tanay, Russia in August 2021, where his fastest speed was 503.25 km/h. The gold medallist Kyle Lopbries of the USA, who has been competing against Raimer for years, gained a world record with his fastest speed of 508.93km/h.

The reason for the difference in speeds between the 2016 and 2021 records lies in a change in the technology used to calculate the speed of the skydivers. Analysis of the graphs of speeds over 400km/h recorded on the barometric devices was showing that the Doppler Effect was occuring and so the use of GPS SMDs was discussed by the ISC in 2016, which was followed up by testing of the GPS systems in order to meet the approval of the committee.

The adoption of new technology means that the sport is developing rapidly, with more and more skydivers adopting GPS SMDs to enable them to train more effectively by pinpointing the success (or not) of different techniques when free falling.

Another new feature recently introduced by the ISC is the availability of the video footage behind the scores in some skydiving disciplines, which enables competitors to analyse each other’s performances in minute detail.

Staying abreast with the innovation in technology allows a sport to progress and its athletes to push themselves ever faster, further, higher etc. The work done by sporting bodies in researching, testing and adapting regulations to embrace this new technology is essential to maintain accountability in competition and the ratification of records.

As for Henrik, he is resilient about the change of measurement, describing himself as a “Skydiving self-employed digital signage installer that once became a world champion.” on his Instagram account. But with some close analysis of the videos and GPS from his flights, perhaps he will become a record holder once again under the new recording regulations. Watch this space! 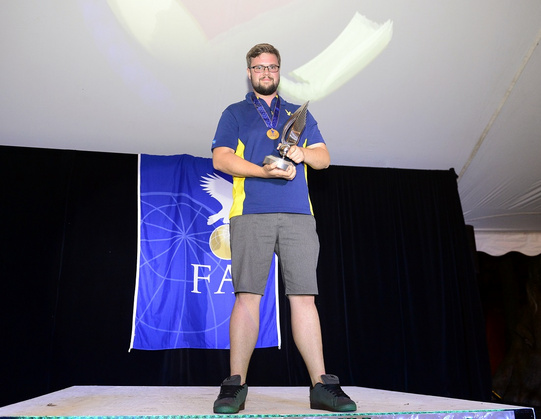