Texas is known and loved for its barbeque, rodeos, and sweet tea.  But pull your trailer into the eastern part of the state and it’s all about hot air balloon competition. That’s right, Longview, Texas is home to The Great Texas Balloon Race, one of the most prestigious competitions in the United States. Warm southern hospitality is clearly a main attraction and this community proudly presents a welcome mat to international competitors as well. 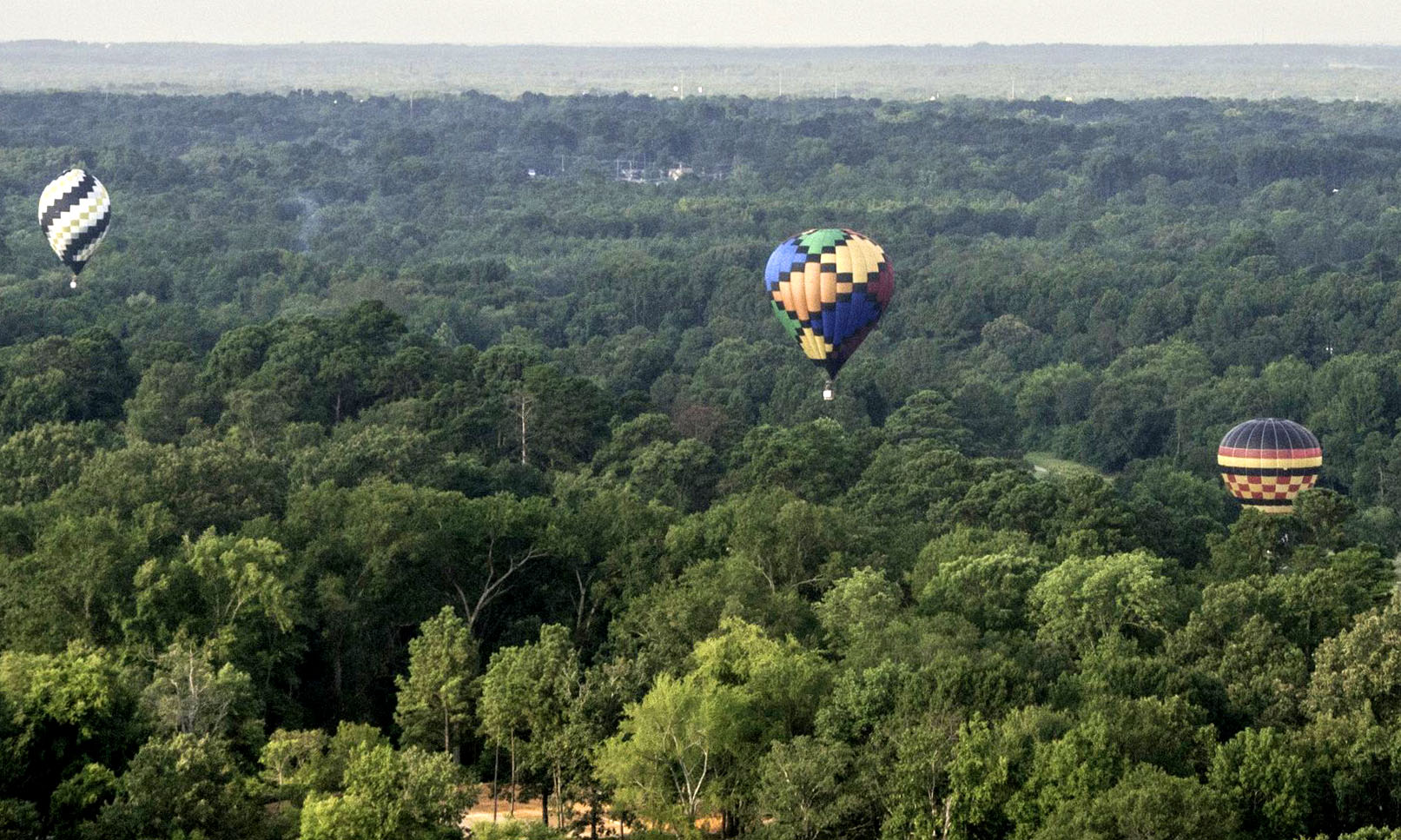 For years, event organizers have been putting their heads together and brainstorming ideas on how they could  introduce new and younger pilots to the world of competition ballooning. How could the original founder of this event, Dr. Bill Bussey and others, create an atmosphere where the new, young, ”next generation” of World Class young pilots like Petrehns, Heartsills, and Donner,  cut their ballooning competition teeth in a supportive and nurturing environment?  The answer came during the 2019 event in a new event category, specifically for pilots who are twenty-nine years old and younger.  They would be called “Young Guns”.

A “Young Gun” is defined as a young person who is self-confident with the skills to be successful.  The Great Texas Balloon Race would use their event to help the “Young Guns” develop the needed confidence and skill set to enjoy and excel at balloon competition.

A few years back, Dr. Bill Bussey retired from his day job as a dentist, but he’s never been busier.  When he’s not in his balloon port or out flying, you’ll find him with one of his many young balloon friends (myself included), telling stories, or teaching them the finer points of flying in East Texas.  As I attend LeTourneau University just a few miles from Dr. Bussey, I call Longview my temporary home. Before moving to Longview, I thought my days of flying every weekend would be on hold. I had no idea how much of an ambassador and advocate Dr. Bussey and his pilot friends are to all young balloonists, especially those like myself, interested in competition. 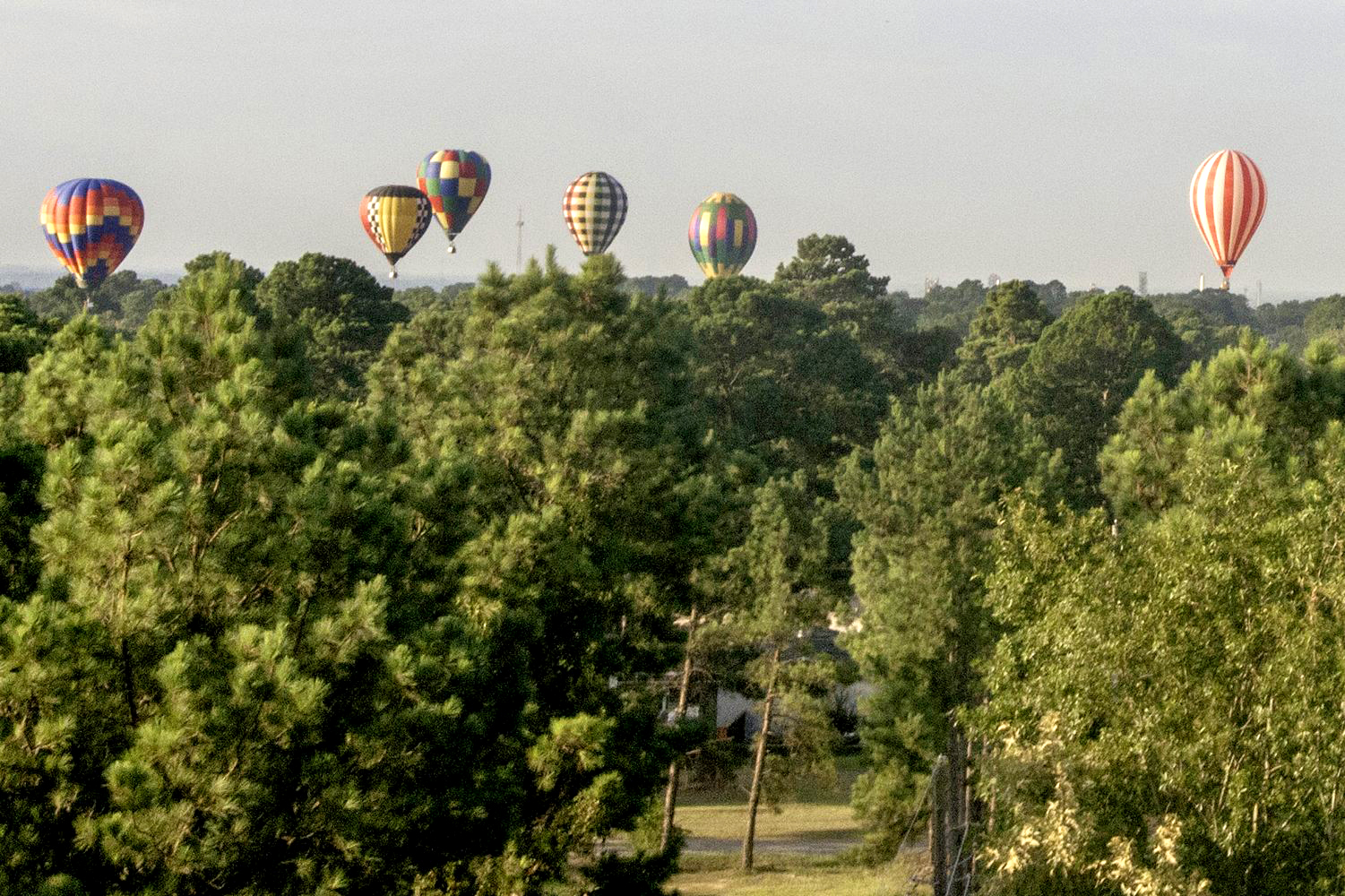 With a little help along the way, I was one of the six Young Gun pilots who had the opportunity to be a part of the inaugural event.  It was decided that the tasks would be the same for both the Young Guns and the main competitors in Great Texas Balloon Race. Since half of the field of Young Guns had never competed before, we were allowed additional time to ask the event director and his staff members (after the briefings) about anything from specific questions on the tasks, weather, or even advice and guidance on how a flight and the tasks should, could, or would be flown.

As a safety precaution for Young Guns, to avoid congestion at targets, it was decided the take off period for our group would start fifteen minutes after the main group of competitions. After a practice flight on Thursday morning, everyone was eager to get some “real” tasks flown  during the next three mornings. On Friday’s briefing, we discovered what our morning would look like.  First, a “Fly In” and next up a “Hesitation Waltz” using an electronic marker only. Then, on our last task, another “Hesitation Waltz” using hard targets.

As is the case with most competition briefings, leaving the briefing room everyone sprinted to their vehicles and quickly drove off, determined to find the best place to launch.  Half of all pilots (myself included) decided on a big backyard as the perfect place to launch, while the others chose a cut field another kilometer away on the same wind line.  The launch period for the Young Guns opened while I was still driving to the launch site.  I was happy to discover that all competitors would be launching at the same time since the lower steering winds tend to disappear fairly early in Longview.

Once my crew and I arrived at the launch site, we immediately started inflation. As I stood my balloon up, I realized that I was the first one to stand. I quickly loaded my basket and took off. I counted two balloons well ahead of me and considered they had probably already passed the first target.  With the first target in sight, I ascended a couple hundred feet and was immediately met by high wind speeds. These winds were the fastest I had encountered all summer, at around thirty kilometers per hour with a light layer on the surface. Due to these wind speeds there was not much time in between targets. I was forced to drop my marker from higher than I would have liked and terribly miscalculated the drift, barely getting a score on my drop. Immediately after the third target, I found a grass front yard and dropped in for an uneventful landing. 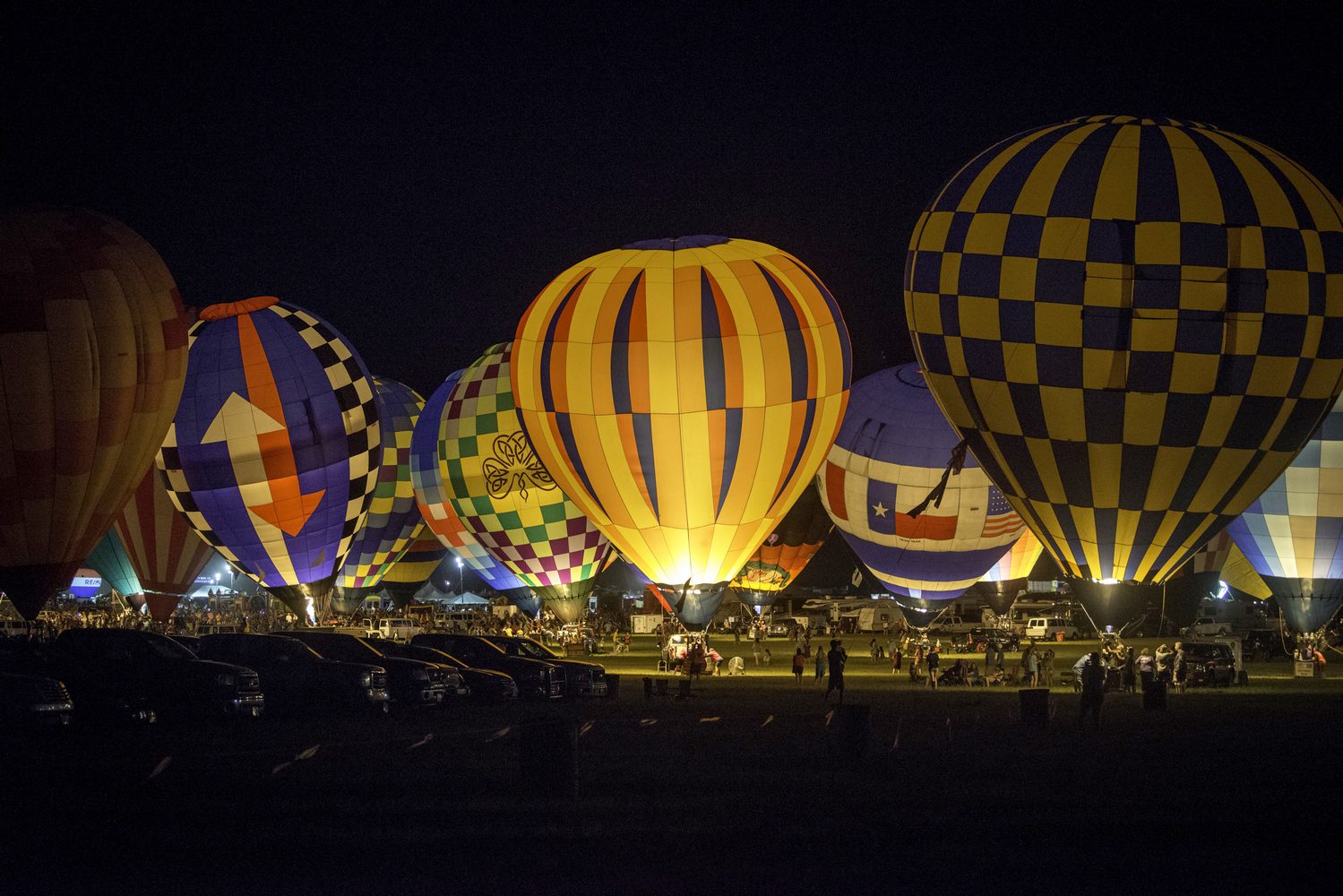 While that unfortunately turned out to be our only flight, we had the opportunity to participate in two glows that were like nothing I had ever experienced. Timed to music, we were all glowing in a pre-timed sequence with different groups burning at different times. This created  a show that even experienced pilots found impressive. As the creator of the modern day glow, we should have expected nothing less from event organizer Dr. Bussey. 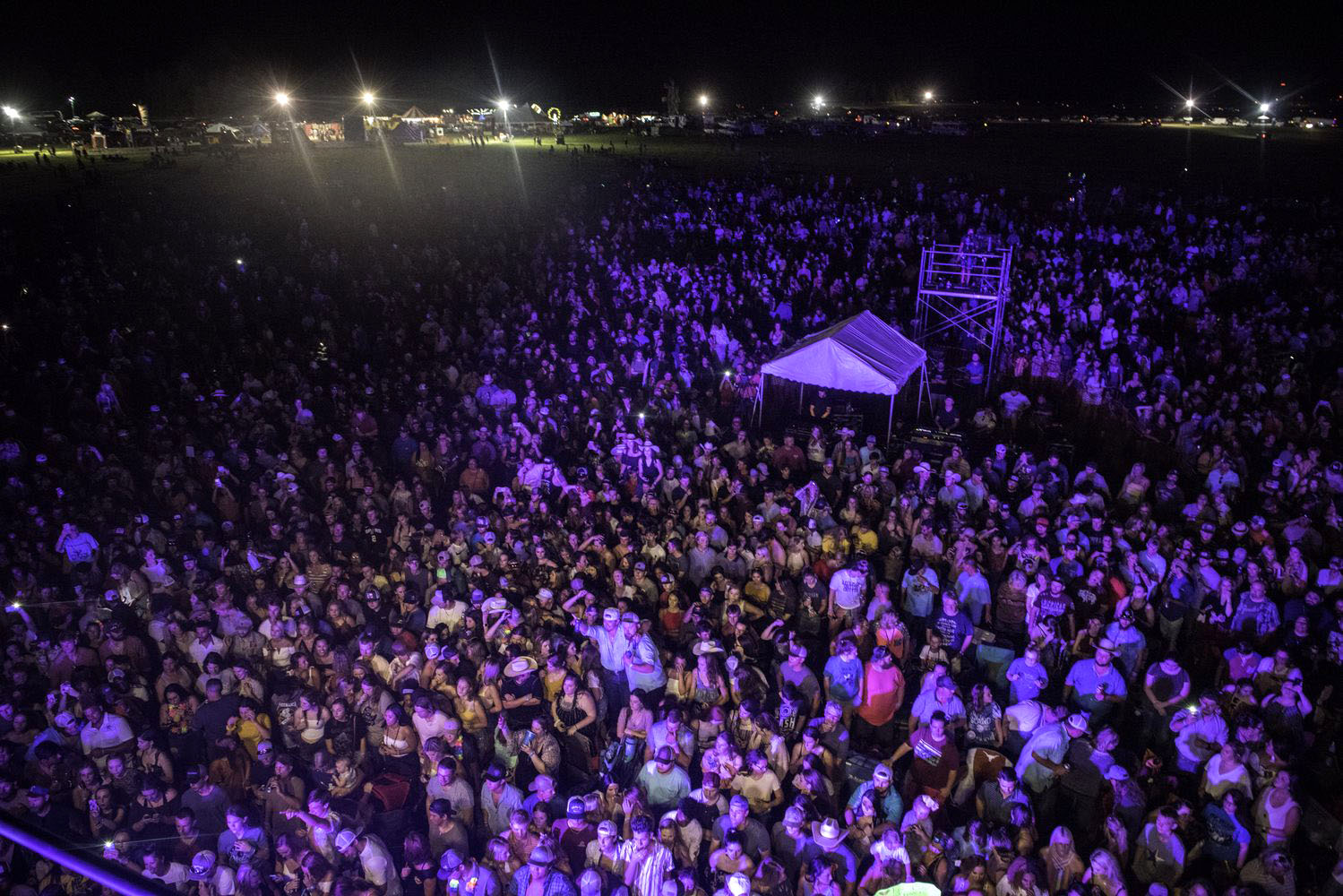 To close the weekend, we had an award ceremony that was filled with laughs, highlights and camaraderie (of course it was served up with great food and some good ol’ Texas sweet tea). When it came time for the podium, no one was surprised to see the name Petrehn on the top of our Young Guns winner's list.

Andrew Petrehn Jr., flew great flights finishing first on two of the tasks. In second place, was  Longview native, Blake Aldridge, with a great finish in the first ever “Young Guns” event. I was proud to climb onto the podium, taking third in the event. 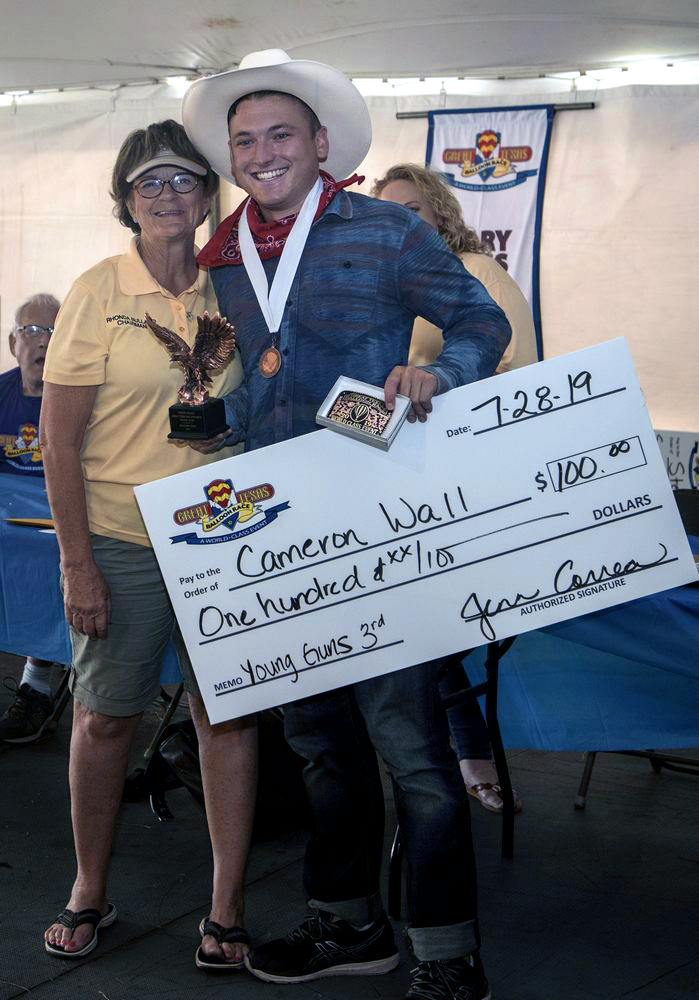 Cameron Wall with his check, along with Rhonda Bullard, chair of the Great Texas Balloon Race

Looking back on this event, it certainly is promising to see organizers and all of their pilots so generously support the next generation of competitors. The event, no doubt, is a sign of great things to come. Witnessing an entire group of young pilots competing and being together is a sign that our sport is not dying out. Instead it is growing stronger, with new and young blood showing up, due to influences like Dr. Bill Bussey and events like the Young Guns.

While Texas is known for barbecues, rodeos, and sweet tea, it is in Longview where Bussey and his crew will soon be known as the best place for Young Guns to fly and compete as they keep the sport alive!