At the 2012 FAI Awards Ceremony held yesterday in Antalya, Turkey, John Dickenson was presented with the FAI Gold Air Medal by FAI President John Grubbström for his great contribution to the development of aeronautics by inventing the modern hang glider.

The FAI Gold Air Medal is the one of the two most prestigious FAI Awards together with the Gold Space Medal. It is reserved for those who have contributed greatly to the development of aeronautics by their activities, work, achievements, initiative or devotion to the cause of Aviation.

What were your first thoughts after having received the news that you are awarded with the FAI Gold Air Medal ?

I was unaware of the submission to the FAI  for the “Gold Air Medal”, and only advised of the submission a week or so prior to the announcement that the application had been successful.  Initially my feelings were that it would be most unlikely to be successful.  That my humble experiment with plastic sheet, sticky tape and other odd pieces of scrap could be seen as worthy of such a high honour. When advised of the success of the submission I was amazed, and not altogether sure as to whether I was dreaming or not, until I received formal confirmation.  I am deeply grateful to Mr Stephane Malbos of France, and Mr Ken de Russy of the USA for their submissions.  And also Mr Graeme Henderson, a New Zealander now living in Australia, for validating the veracity of the information they provided to the FAI.

From early childhood I was always interested in things that flew, and I studied intensely, from when I learned to read, everything that I could lay my hands on about aircraft and how they fly.  I was desperate to get into the air and fly for as long as I can remember.  I built many model aircraft, and eventually a gyro-glider, which I flew. A witness to my gyro flights reported my exploits to members of the Grafton water ski club  to which I belonged, and I was encouraged to build and fly a water ski kite for an up coming water ski carnival. I built a model water ski kite as flown in the 1950s - 60s and did not like the way it flew. Inspired by a picture of a NASA gliding parachute, a series of experiments led me to building the Dickenson Wing. It was far superior to any ski kite flying, and was fully capable of foot launching into soaring flight. I spent the following two years or so, perfecting the design, flying techniques, tow releases, take off and landing methods etc.

How and when did you start flying ?

In my teenage years I had an hours flying time as a student pilot in tiger moths and also a short period of flight in a dual controlled sailplane.  My manic desire to fly resulted in obtaining a set of plans for a gyro-glider which I built and flew in my mid twenties.  These flights were reported to the water ski club members in Grafton, where I was also a member. Since I was then regarded as their aviation expert I was given the job to build and fly a water ski kite for an upcoming water ski carnival in 1963. Not satisfied with the model water ski kite that I built to determine a full size model, I was casting around for some other solution and gained inspiration from a picture of a gliding parachute that NASA was experimenting with to return manned space capsules to earth.  It was necessary to add a solid air frame to their concept, which I built as a model, and did extensive testing and determined that the concept was practical.  These experiments led to my glider and from then on I was able to fly at will, whenever I desired.

What has been your best hang gliding moment ?

Although I was not the first person to get the wing in the air, that honour belonged to the late Mr Rod Fuller, who bravely flew the wing with the control bar incorrectly positioned, with considerable skill he managed to return the wing and himself safely to his starting point. Once the control bar was correctly positioned I then made the first truly successful flight “in the Dickenson Wing”.  I was in the air for some twenty minutes, under towed flight, and found that my experiment was an outstanding success.  The control was beautiful and the wing had outstanding stability.  This was a flight I will never forget.

What advice would you give to young pilots and inventors ?

Firstly to student hang glider pilots, I would suggest that if they feel jaded and not 100% keen to fly, don't.  For foot launching in particular, the first five seconds are critical.  If the launching pilot is not at their 100% best, then they face considerable risk.  Getting into the harness and gaining control during those first few seconds of launch, can only be effected safely if the pilot is on top of his game.  For intending inventors, invention is rarely a single flash of inspiration, and is more often a continuous, grinding series of problem solving.  The secret is to keep trying, never give up. 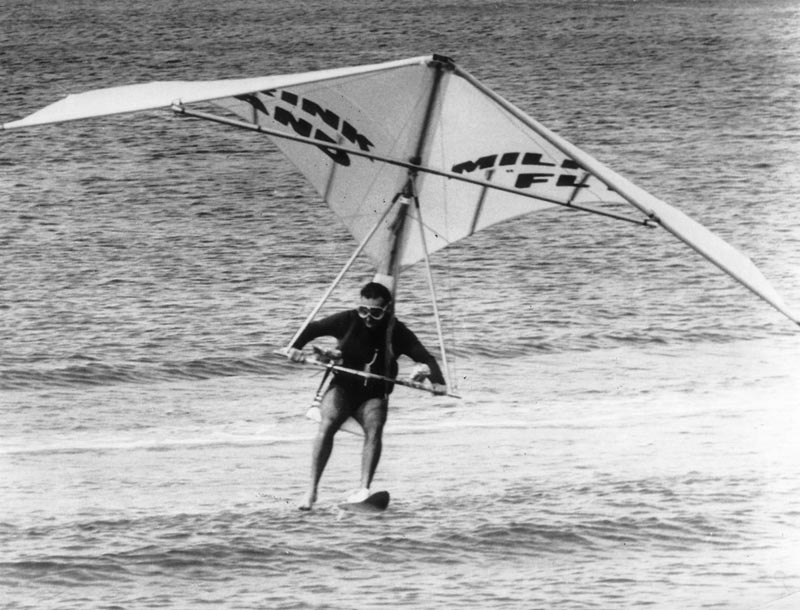