Look Up! The Drones Are Coming

Drones are here now and they are multiplying fast! The first FAI International Drones Conference was a big success as it heard about the brave new world of Drones and robots in the sky.

‘The drones are coming, and they are coming fast.’ That was the take-home message from the first FAI International Drones Conference in Switzerland after a weekend of exciting, innovating and revealing talks.

Twenty drone professionals and experts gathered in the École Polytechnique Fédérale de Lausanne under the auspices of the FAI, the World Air Sports Federation, to get a better understanding of how drones will affect aviation and what the potential is for growing air sports.

Opening the conference FAI President Frits Brink said: "Drones and drone flying have caught the imagination of the world. They are the route into the world of air sports for youngsters. Driven by the development of such easily available technology, and with no need of an airfield or dedicated arena, drones have brought hundreds of thousands of new people into the world of air sports."

In a keynote presentation to an audience of 200, Alain Siebert (pictured below), chief economist at the Single European Sky ATM Research Programme (SESAR) said there will be an estimated 7.4-million drones in operation in Europe within 15 years. Some 400,000 will be commercial, with 7-million consumer drones. 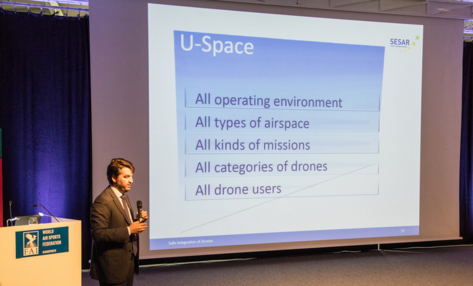 Setting out a vision for a new type of airspace developed by SESAR called U-Space, Siebert said U-Space will enable highly complex automated drone operations everywhere, including cities. Drones will operate autonomously, as fleets and without one-to-one pilots.

“We need to build the case that robots are safer than humans,” he said. “Practically speaking, by 2019, we will have the first set of services in operation [at a European level].” Of existing air users, including air sports pilots, he said, “Don’t be scared, this is an opportunity.”

The conference heard from numerous real-life examples of drone technology in action.

Wayne Lording from the Institute for Drone Technology had travelled from Australia to show how drones are revolutionising farming in that country. “With drones it is so easy. Five years ago you would have to spend $50,000 to get a satellite image. Now with a drone you get that information in five minutes. Drones are phenomenal tools for farmers.”

He added: “I’ll be jumping with joy when a drone can lift up a hay bale and deliver it. That will be fantastic.”

Dr John Langford, CEO of Aurora Sciences, explained how his company was working with Uber to develop an autonomous taxi drone that could take off and land vertically in urban areas. “In less than two years the number of drone pilots has far surpassed the number of pilots. This is disruptive innovation,” he said. “Uber aims to have demonstrations of this [technology] by 2020.”

Other speakers described how drones are now regularly delivering blood samples between two hospitals in Switzerland; how they are used in making 3D maps of car crashes, completing in 15 minutes what used to take several hours; and how they are being used to deliver snake anti-venom 60km to villages in Amazonian Peru.

In the second session, the conference heard from experts how drones and drone technology is being regulated.

Lorenz Murzilli from Switzerland’s Federal Office of Civil Aviation could not have been clearer. “Be aware, this is a paradigm shift,” he said. “Airspace is a commodity that is suddenly open to everyone, and this is a major, major shift.”

Despite fears from some current aviation users and regular calls for bans on drones he said that was not the way. “It is too easy to impose blanket regulations, it’s basically impossible and it doesn’t work.”

The “paradigm change” in how airspace around the world was changing was happening now he said, and it was happening in mainstream aviation, too.

Benoit Curdy, Secretary General of the Global UTM Association, said that working together had to be the answer – and that meant including many non-traditional aviation stakeholders.

Flashing a slide on the screen with 60 members he said there was now a “global effort” to create a regulatory framework for unmanned traffic management (UTM) that will work for the many millions of drone users around the world.

A broad consensus sees three categories of drones: an Open category for those under 30kg; a middle category for more professional drones; and a third category that is regulated as traditional aviation is now.

“There are three steps to managing U-Space,” explained Curdy, “Registration, e-Identification and geo-fencing.” Although there were “lots of questions” around all those elements, that is where the drone world is focusing its efforts, he said. “We are starting to see everyone working together.”

The question of collision-avoidance was covered in depth by speakers including Andrea Schlapbach from FLARM. “It’s very hard for pilots to see small drones,” he said, before showcasing technology that allows drones and manned-aviators to ‘see’ each other digitally. 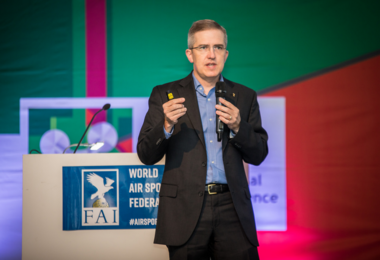 Tim Dawson-Townsend from Aurora Swiss Aerospace (pictured above) explained how radar could help, and described how his company is developing radar systems that can work on very small drones at very low distance. “The future will involve multiple sensors on both big and small drones.”

Christian Struwe from market-leader drone-maker DJI captured the state of flux that aviation is currently in. “Aviation used to be an arena that was highly institutionalised. Today we are not sure who is developing the standards. Not because there is no one, but because there is everyone. Who will come out on top? That is an arms race where everyone is trying to struggle for relevancy.”

He added: “The aviation industry now is about countless entrepreneurs and start-ups, it’s consumer electronics for everyone.”

The third and final session at the conference covered Drones and Sports.

“Aeromodelling culture has a long history going back 100 years,” explained Rich Hanson, president of the Academy of Model Aeronautics. “I was introduced to aeromodelling by a teacher, and it led me on to a 50-year career in aviation.”

Drones and drone sports is most exciting, “because of the young people involved,” he said. “Drone racing has brought in the next generation.”

Douglas Burnet from the Aerial Sports League in the USA agreed. “Our most successful pilot is 16-years-old,” he said. “We have realised that we can use drones and create educational programmes for kids to learn engineering.”

The big driver behind the rapid rise of drone sports, which includes racing drones around a track and ‘drone wars’ with dedicated combat drones, is FPV - first-person view. That’s the headset you see drone pilots wearing when they race each other.

“FPV is really what took people by storm a few years ago,” Burnet explained. “The pilot flies as if they are in the cockpit of the drone. The goggles black out everything around, and create flow state. Time seems to slow down, reflexes are heightened, it creates a cascade of feel-good chemicals inside the brain, and this is what is driving the rapid adoption of FPV racing.”

Drone racing is growing he said, with the US consumer drone industry worth $1bn this year, and projected to rise to $4.5bn by 2024. “Drone sports is going to drive that growth,” Burnet said.

Pilots from both the traditional world of aero modelling and the new world of drone racing echoed what Burnet said. Kevin Dodd and Neil Tank from the Model Aeronautical Association of Australia showed how the many new drone users in Australia had been welcomed into the air sports world. “We have a longstanding relationship with the aviation authorities in Australia, we have opened up our airfields to drone use and we are also working well on social media to engage drone pilots,” Dodd said.

And Anthony Cake, co-founder of ImmersionRC, said the progress that drone sports had made in the last three years “has been absolutely mind blowing.”

Now he wanted to break out of the indoor arenas and “soccer fields” and fly off into the wider world, he said. Flashing up a slide of glaciated mountains in Canada he said, “I want to race here. I want my first gate to be on top of that mountain, the next one down on the lake.”

He added: “This sport is still young enough to do innovative things. Lets do them.”

One person who is doing innovative things is Vincent Delcommene, who won the FAI Drone World Cup in 2016. Delcommene said, “I would like to fly the Forumula 1 tracks. If you work in safety first and find a solution, then you will find a way.”

He added: “The first time I put on goggles it was so complicated I couldn’t fly. It took me five months to build my own flight controller.” Now, it was so accessible even children can do it. “In fact there is a boy in Spain who is nine-years old and he is beating everyone!”

The future for racing drones of this size included loops around race-tracks, the Monaco Grand Prix track or even around Lake Geneva. “The drones can carry multiple HD video cameras and be seen in the air flying. There are a whole lot of sponsorship opportunities.”

The team behind them had taken an aviation approach to developing them, he said, using aviation-grade materials and focusing on safety, teamwork and certification. “We know we can end up with an amazing sport,” he said, “and that is what we are working to achieve.”

As part of the Expo, the Swiss Rotor Sports Association Drone Racing Cup 2017 was held in the grounds of the EPFL. Winner Dario Neunschwander, 28, said: "I'm happy! In FPV you need a lot of luck. I practise almost every weekend and this was my lucky day."

Commitment to the Future

Closing the conference FAI Secretary General Susanne Schödel thanked the delegates and speakers and confirmed the FAI's commitment to welcoming drones into the air sports world. "The FAI will continue to work on maintaining a leading role in drones, focusing on unifying the global drone sports movement, and benefiting from the overlap between the research and development in the drones industry and the leisure and sports use of drones."

She said there would be a second FAI International Drones Conference in a year’s time. “As we have seen, the pace of change is so rapid. We look forward to seeing the new developments as they take place.”