The Lucky Lady II was never meant to fly around the world.

The aircraft – a Boeing B-50A Superfortress – was originally a backup option for the B50 Global Queen, which had been selected to make the circumnavigation on 25th February 1949 but had aborted due to an engine fire.

It was time for the Lucky Lady II to step into the limelight.

The mission: to fly non-stop around the earth (from Carswell Air Force Base, Fort Worth, Texas from 26th February to 2nd March 1949) demonstrating that a US bomber could reach anywhere in the world.

The flight was conducted in secret. Even the families of the crew were unaware of the danger that their loved ones were facing, attempting a circumnavigation with a total of eight inflight refuels at four locations. 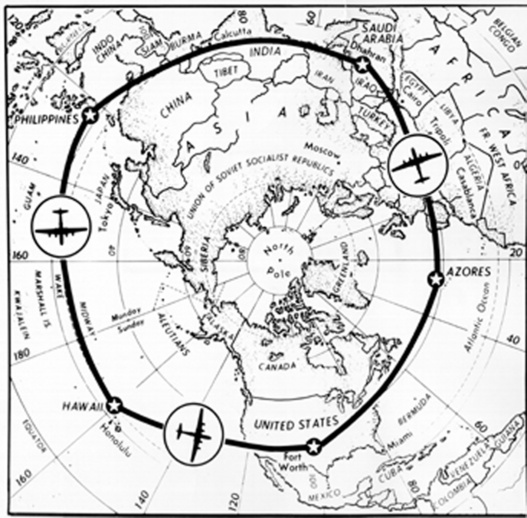 Since the 1920s, long distance transatlantic flights had become relatively frequent, and the challenge of aerial circumnavigation was successfully completed a handful of times in the 1930s, but with the aircraft needing to land to refuel.

The propeller-driven aircraft – part of the fleet of the US Air Force’s 43rd Bombardment Group – was an updated version of the B-29 which had been flown in World War II. She had four Pratt & Whitney R-4360 Wasp Major radial engines to provide a total of 12,000 horse power and was fitted with an extra fuel tank in the bomb bay to provide the extra range to complete the non-stop journey.

Captain James G. Gallagher, a World War II veteran, commanded the Lucky Lady II. The crew for this historic flight numbered fourteen, with each man on a shift rotation of 4-6 hours.

Looped hose refuelling was scheduled during daylight hours by KB-29M Superfortresses from US Air Force bases in the Azores, Saudi Arabia, the Philippines and Hawaii, with the longest distance between refuelling the 8,529 kilometres (5,300 miles) between these final two locations.

At each location there were two refuel operations. To perform the refuelling procedure, the Lucky Lady II released a cable which was drawn into the KB-29 and connected to the refuel hose. The Lucky Lady II then hauled back the cable and hose to connect to the fuel tank. The KB-29 then rose above the Lucky Lady II, using gravity to allow the fuel to flow. The system had only been made public in 1935 by the UK's Sir Alan Cobham and was, in fact, soon improved upon to create one of the two systems still in use today.

Some fuel transfers were made difficult due to poor weather conditions. Tragically, one of the pair of tankers that refuelled in the Philippines crashed on the return to base and the crew of nine lost their lives.

The aircraft landed successfully two minutes ahead of the predicted time at 10.22am on March 2nd 1949, after 94 hours and 1 minute. The recorded distance of the flight was 37,742 kilometres (23,452 miles) and the Lucky Lady II had achieved the very first non-stop round the world flight.

The crew was welcomed back to Carswell by the Secretary of the Air Force, W. Stuart Symington, Jr., General Hoyt S. Vandenberg, Chief of Staff of the Air Force, General Roger M. Ramey, commanding 8th Air Force, and Lieutenant General Curtis E. LeMay, Strategic Air Command. The crew was awarded individually with the Distinguished Flying Cross, as well as the National Aeronautic Association Mackay Trophy for the most meritorious flight of the year. 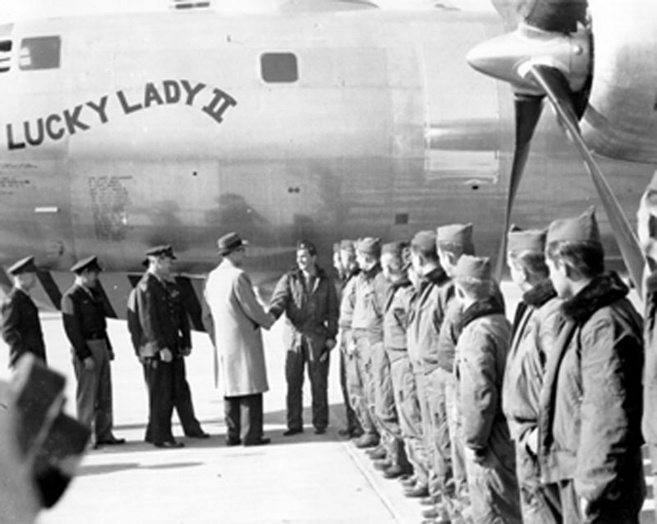 A year later, Captain Warren E. Griffin piloted the Lucky Lady II on a maintenance flight and landed in the desert when the engines failed. Although the crew was uninjured, the aircraft was badly damaged and retired from the US Air Force.

The Lucky Lady III, commanded by Lieutenant Colonel James H. Morris, one of the two co-pilots of the Lucky Lady II, also undertook a circumnavigation in 1957, completing a slightly longer distance in 45 hours, 19 minutes.

See a newsreel video about the historic flight

The crew of the Lucky lady II