Claude Gillard – King of the Air

Claude Gillard, past IPC President then President of Honour sadly passed away on Monday August 3rd at the ripe old age of 92.

He served skydiving for many years both in his home country, Australia and internationally both as a competitor and a sport politician.

He was born in Melbourne in March 1928. He discovered parachuting in the 2 Commando Company of Citizens Military Forces, earning his parachuting wings in 1959. That was the start of a remarkable career spanning more than 5 decades.

He performed many firsts in all fields, records, safety, development and competition.

He was on a high altitude record jump from 23600 ft in 1961, was part of the first baton pass in Australia in 1962 and achieved a 6-man baton pass record in 1964. He was a successful Style and Accuracy competitor. He wrote the first Australian Parachute Instructor Manual, developed instructor courses and more.

As a rigger and equipment innovator, he established Southern Cross Parachutes and put his name to the Gilstar canopy. He was responsible for introducing the piggyback system to Australia and brought in the first Ram Air canopy.

He was involved in the Australian Parachute Federation from the beginning and became it’s 5th President in 1966. He held many roles over the years including National Safety Officer, National Coach and Executive Director. He was instrumental in restructuring the Australian NAC as well.

I don’t know what year he first attended an IPC (now ISC) meeting but it was around the late sixties. He became an international judge in 1968 and served on many occasions as a Juror at FAI First Category Events. He became IPC President in 1994 and served in that role for 5 years. He was also an avid member of the International Order of Bastards (IOB), a beer drinking lobby group that generated a lot of fun at IPC meetings. That group gradually disappeared in the late nineties, only surviving a short while after Claude’s end of tenure.

His political acumen was well recognised and his close ties with Thailand and other countries in the Far East helped develop sport parachuting and FAI membership in that part of the world.  In addition to becoming a President of Honour of IPC, he was named FAI Companion of Honour in 2003 and was inducted into the International Skydiving Museum Hall of Fame in 2012.

His legacy will long remain as will, for those who heard it, his frequent rendering of the song “King of the Air”.
Blue Skies Claude… RIP

Gillian Rayner with gratitude to the APF and particularly to Kelly Brennan for her valuable input.

Claude’s funeral will take place on August 10th at 2pm (6am CEST – midnight EDT) and will be live streamed. Link upon request from APF (apf@apf.cm.au) 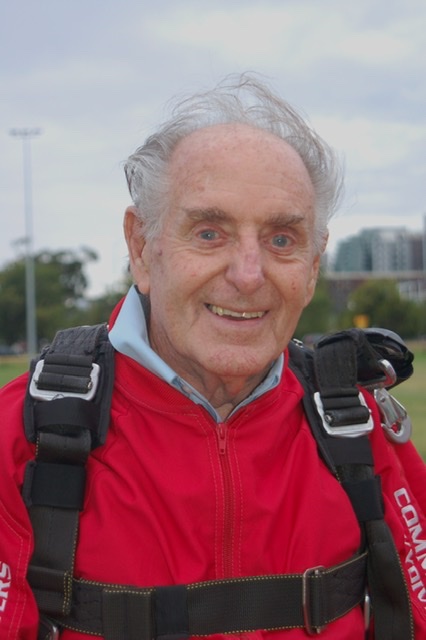