A new FAI Swoop Freestyle World Championships will see its first event in August this year, following a new collaboration between the FAI and a specialist sports company, A. Sports.

The high-impact, adrenalin-fuelled discipline of Freestyle Canopy Piloting is known as Swooping, and involves parachutists flying at high-speed across a ‘Swooping Pond’ to score points based on style and execution.

Typically held in airfields and parachute drop zones away from the public eye, the new FAI World Swoop Freestyle Championships will take place in locations chosen to attract maximum exposure and public attention.

FAI President Frits Brink welcomed the announcement of the new competition, which was confirmed by the signing of an official memorandum of understanding between the FAI and A. Sports.

Brink said: “Freestyle Swooping is an incredibly exciting and impressive discipline to watch.

“With the launch of the new FAI Swoop Freestyle World Championships the sport will move from the fringes of airfields to the centre of the chosen cities. This is a great opportunity to grow the sport and showcase its high-level athletes to the world.

“We are looking forward to working with A. Sports to make the FAI Swoop Freestyle World Championships a big success.”

The CEO of A. Sports, George Stribling Blythe, said: "We developed the Swoop Freestyle platform over the last two years in Copenhagen. Last year the event attracted 100,000 spectators and was delivered across both TV and digital platforms. We are thrilled to now be working in collaboration with the FAI. The new FAI Swoop Freestyle World Championships will be bringing the top athletes into the heart of major cities throughout the world, and thereby to brand new audiences.”

Stribling Blythe added: “We are taking this step to assist in the growth of parachuting as a whole, bringing it from rural settings into the urban environment. By combining the latest production technology with multiple media platforms we will be providing audience experiences that have never been seen before."

The organisation of the events will be the responsibility of A. Sports, while the FAI will sanction the competitions and help develop the rules.

Other responsibilities that the FAI and the FAI Parachuting Commission (IPC) will hold include:

The first event will be held from 25-26 August 2017 with a host venue to be announced shortly. It will consist of 20 selected and invited Swoop Freestyle competitors who will compete over two days.

The agreement has been signed for an initial three-year period.

Swoop freestyle is the new urban extreme sport both competitive and technical. It combines speed and precision flying. The athletes jump from 1500 meters (5.000 feet) above city centres, reaching speeds of up to 150 kilometres per hour. The speed generated by a series of turns is then utilised by the athletes to perform a range of tricks, whilst in contact with the water surface, prior to ending their run on a small floating platform.

Due to the highly technical nature of Swooping only the world finest canopy pilots make the cut. From the innovative sport to the science of viral content, Swoop Freestyle is all about next generation coverage with unique feeds and broadcasting opportunities that combined, allow the 100,000s of spectators and millions of viewers at home to experience a unique extreme sport. The sky is no longer the limit.

The FAI Swoop Freestyle World Championships will provide the sport with a global platform to take the competition around the world in a series, which culminates in a crowning both the individual as well as a team concept. This will drive a narrative across the sport to excite and captivate audiences. Underlying the sporting element will be a strong “Swoop” festival feel combining music and street food to create a buzz around town. 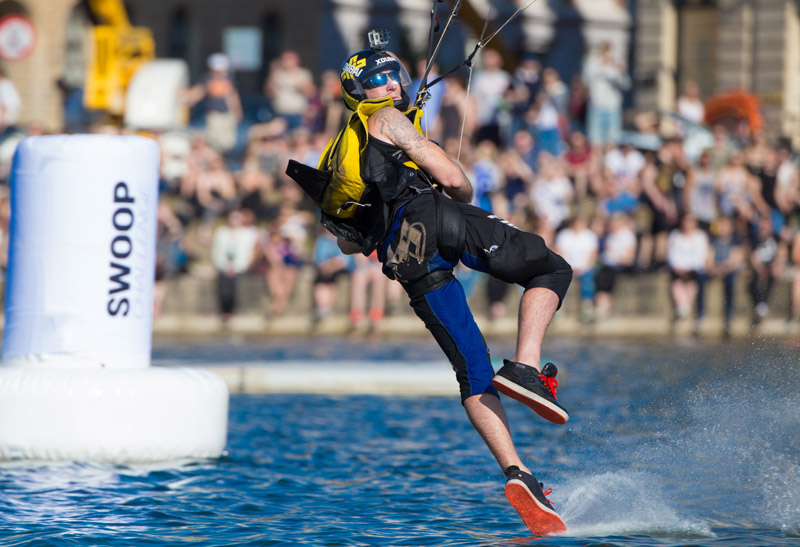