Saturday 6th October 2018:  Today is technically the start of the World Championships here on the Gold Coast, Australia being the Official Arrival Day. By the looks of things, most competitiors are already here and have been putting in some pratice jumps.

Unlike many World Meets we aren't actually based on an airfield, so the competitiors are bused to the emplaning point about 3kms away, then their DZ is located a short distance away from 'base'.

A quick glance at the numbers shows we have 25 countries registered with around 460 competitiors. The largest contingent is from the USA numbering 63, with the host country, Australia not far behind with 55. At the other end of the scale, Austria has entered just one Speed competitior.

The Official Opening Ceremony took place this afternoon at Surfers Paradise Beach, with its stunning skyscraper backdrop.  With everyone marshalled into their respective countries plus Judges/Officials and armed with beach towels on which to sit on the sandy beach, they paraded onto the beach in readiness for the start of the procedings.

The low cloud base put paid to a planned thirty way from a C17 Globemaster but there was sufficient height for hop and pops where we saw jumpers exit two Cessna Caravans carrying the flags of Australia, the APF and one depicting the World Meet logo, soon followed by 25 jumpers, each representing their own country and carrying their own nation's flag, everyone landing on the beach in front of competitiors and spectators alike. Whilst the 30-way attempt wasn't possible, two passes along the seafront soon had the 30 plus jumpers landing in front of the assembled crowds.

The formal proceedings started with the performance of a Smoking Ceremony,  being a ritual welcome to the country carried out by Uncle Allan Lena, an Aboriginal from the Yugabeh clan. The Australian National Anthem was sung in the native language of Yugambeh by 12 year old Sophia Eurell, accompanied by the haunting sounds of a didgeridoo.

Those individuals tasked with giving speeches were most succinct and the first individual to address the assembly was the Mayor of the City of the Gold Coast, Tom Tate.  Subsequently, Brad Turner, CEO of the Australian Parachute Federation added his welcome and thanks to all involved.  Next to take to the dais was Gillian Rayner, the IPC President who declared that all official conditions had been met and consequently declared the World Championships open.  Following the raising of the FAI flag and the playing of the FAI anthem, the Competitors’ Oath was taken by Jules McConnel. In closing, Gail Bradley, Australia’s IPC Delegate, read the Judges’ Oath which brought the formal Opening Ceremony to a close.

Returning to the Sports Center, the General Meeting was scheduled for 17.00hrs where Brian Burke, the Meet Director set out the proposed schedule for the coming few days and in view of the likely weather forecast, was quick to point out that everyone should expect a fast turnaround, highlighting the fact that the Championships being split between 3 venues meant that competitiors had to be time-aware. 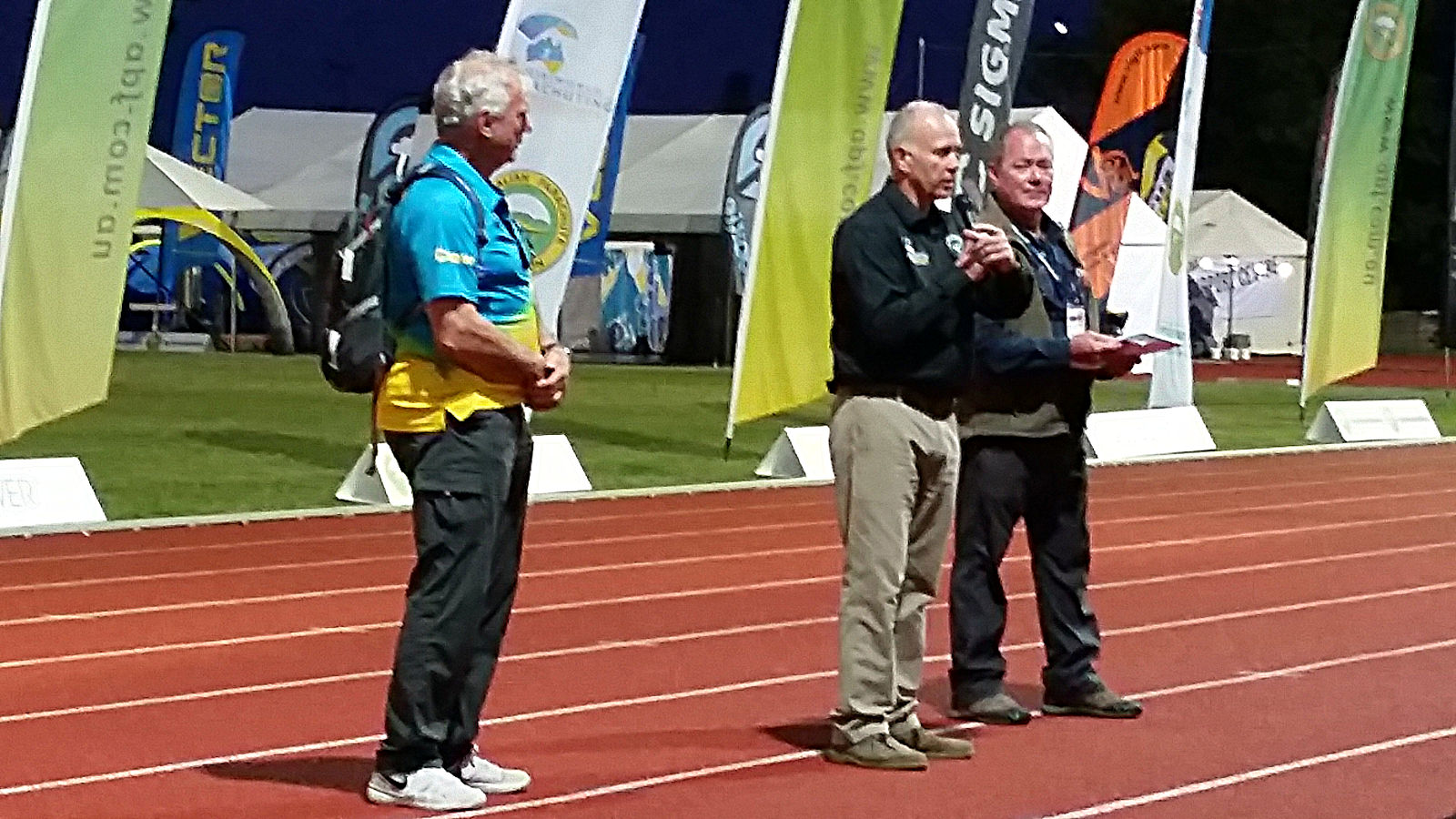 Handing the microphone to Brad Turner, he went on to remind everyone that the venue is a public facility used by both adults and children and asked that everyone be courteous and respectful, towards such visitors and also the premises – nobody wants to foot the bill for damage to a track that cost 1.5million AUS$.

At this point everyone dispersed to their respective locations for the Competitors' Briefings.