Preview of the FAI Sailplane Grand Prix in Spain

Sunday 17 April 2016 will be the first race day of the second Sailplane Grand Prix 2016 in the beautiful valley of Cerdanya, nestled in the eastern Pyrenees. The Cerdanya valley has a remarkable micro climate providing consistent and exciting conditions for sailplane racing. At 3000ft above sea level it is one of the highest airfields in Europe and the 9000ft mountains on each side of the valley provide the pilots with potential for high speed racing.

The  list of competing pilots contain several great names who are seriously competing for a coveted qualification for the FAI/SGP final to be held at Potchefstroom South Africa in November 2016. 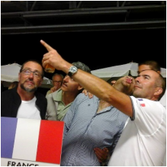 If you compare previous results, the favourite to win has to be Christophe Ruch (France). Ruch was runner up in the last FAI/SGP in Varese Italy narrowly losing first place to his fellow countryman Maximilian Seis. His performance in the last few Europeans Championships show the depth of his ability,  3rd in 2015, 2nd in 2013 and the champion in 2011. Winning last year’s French FAI/SGP event and second place in the 2015 final is evidence of his understanding of the tactics for SGP racing and his commitment to reaching the top of this event.

There are at least two pilots who will make sure Ruch has to perform really well to take the top spot.  Fellow countryman Louis Bouderlique and from Great Britain Mike Young are probably the two most likely to squeeze Ruch at the top.

Bouderlique has a very impressive record. He is current French National 15m Champion and winner of the 2013 European 15m Championships. Not having flown an SGP event since 2008 he will surely be a behind the curve tactically but will no doubt soon be in the groove of SGP flying and pushing for a first place.

Mike Young has not been as active in International contests in recent years but his 3rd place in the 18m World Gliding Championships in 2012 is testament to the depth of his experience and talent. Young, who has more recent

experience in SGP events, took 4th place in the 2014 Spain SGP contest, and this experience may well give him a small edge.

Of the other pilots in the contest there are several who are capable of a surprise top place. Philippe de Pechy from France is a very experienced and competent pilot. Jorge Arias is the top Spanish pilot in the contest and will certainly be very competitive now that he has a competitive Ventus 2 sailplane. Fridolin Hauser from Switzerland is a very experienced mountain pilot who won a race day in the 2014 Spain SGP but is probably not as competitive as in the past.  However, he will no doubt be there amongst the day results on some of the race days.

The races will be covered live using the excellent imaging of Silent Wings Studio and the local team will be working hard to bring you all the news and action as it happens.