After four Red Bull Air Race World Championship podiums including three near misses in second place, Australia’s Matt Hall finally achieved the holy grail at the season finale in Chiba, Japan on Sunday, defeating home hero Yoshihide Muroya by a single point. The FAI is pleased to congratulate Matt Hall as the winner of this ultimate race.

To the delight of the weekend’s 98,000 passionate fans, Muroya had his own moments in the spotlight as he won the race and took second in the World Championship. Martin Šonka of the Czech Republic claimed third place on the overall podium.

The crowds were on their feet even before the race started, and the first shock of the day came in the initial head-to-head, when Muroya, hoping to fly to the title from third place overall, lost to Great Britain’s Ben Murphy (pictured below) by just 0.015s. 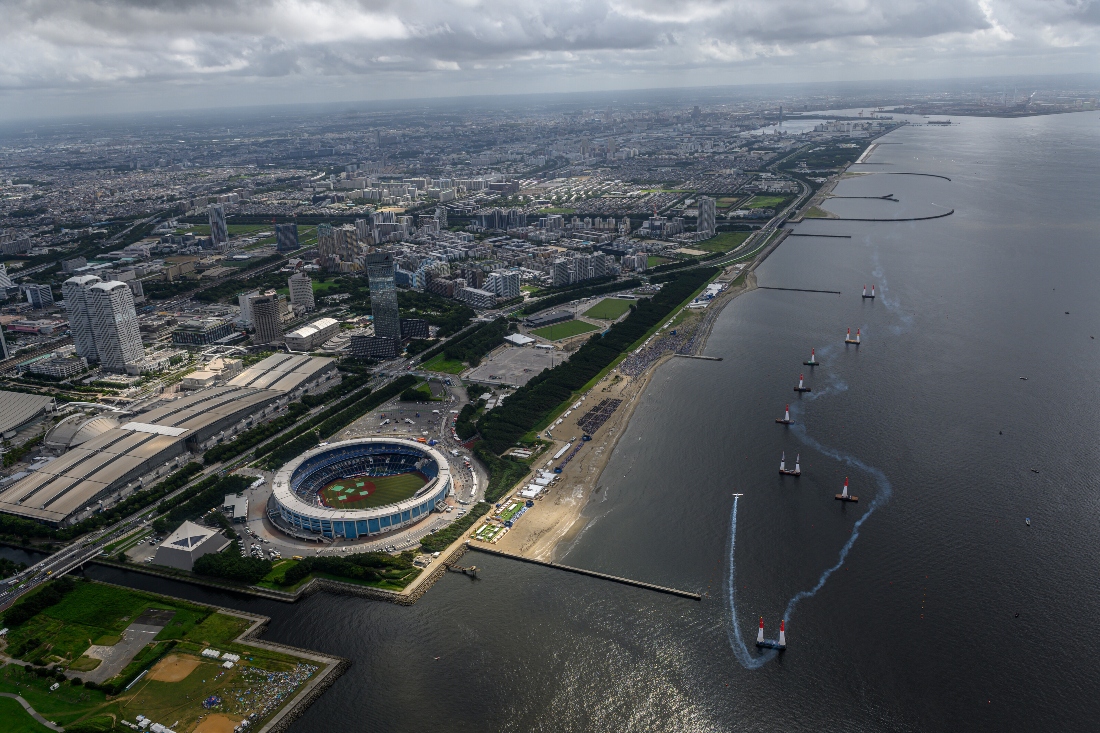 The second stunner happened minutes later, when overall leader Martin Šonka slipped in his own opening round faceoff against Nicolas Ivanoff of France, pulling too hard for an Over G. The one-second penalty suddenly took the 2018 World Champion out of the running for a repeat crown.

Miraculously, when the Round of 8 took off, Muroya was still in the fight, having advanced as the fastest loser. The title was down to the Japanese superstar, who was determined to win his second career World Championship, and Australia’s Hall, focused on his last-chance mission.

Both made it through to the Final 4 – where they would face each other as well as the USA’s Kirby Chambliss and Canada’s Pete McLeod.

In the climactic round, McLeod crumbled with penalties. Muroya played it safe for a conservative 58.630s and Chambliss was 0.971s behind him. Hall needed only to finish third to take the title, and with the world on his shoulders, the Australian coolly did just what he needed to do, flying to 1:00.052 for his long-awaited honor.

Final race results: Muroya first, Chambliss second, Hall third. “I didn't even care where I came in the race – I just knew when we all made it through to the Final 4 that I had to make the podium, and then I heard about Pete’s pylon hit," Hall said.

"The conditions were tricky, and I thought that I could hate myself for the rest of my life if I made a penalty, so I tried to play it safe without letting up too much. Now I need to go and absorb this, but mate, when I’m 90 I’m going to be telling everyone I’m the World Champion.”

Hall’s achievement came not a moment too soon. In the close to 12 World Championship seasons and 94 races, the Red Bull Air Race will not be continued past 2019, making the race in Chiba his last chance for the iconic trophy.

FAI President Robert Henderson attended the competition in Chiba. He announced to the Red Bull Air Race General Manager Erich Wolf that the FAI Group Diploma of Honour, which may be awarded to a group that has contributed significantly to the progress of Aeronautics or Astronautics, has been awarded to the Red Bull Air Race following its nomination by Austrian FAI Member the Österreichischer Aeroclub.

Mr Henderson said: “The FAI has been honoured to be a partner of the Red Bull Air Race since 2005, and is sorry to see this fabulous air sports event being discontinued.

"The series has consistently provided sports entertainment of the highest quality, demonstrating incredible flying skills that have been enjoyed by millions of fans all over the world.

"The FAI extends its congratulations to Mr Erich Wolf and the entire race team, the pilots and the support crews for their enthusiasm and dedication to creating and presenting these races.”