On June 20, 2021 FAI has received 6 simultaneous Paragliding World and North-American record claims for Free distance of 610 km, Free distance using up to 3 turn points of 610,00 km, and Straight distance to a declared goal of  555,00 km made by Sebastien Kayrouz (USA) in Del Rio, TX (USA) on Ozone Enzo 3. This is the first-ever flight exceeding 600 km with a paraglider. We have contacted Sebastien to learn the details.

Congratulations! You are the first to get over 600 km! Why did you decide to break that very record in that very place? I heard you followed the HG record flight route, is it so?

Thank you very much. Last year I set the North American record with a 500 km flight but that flight did not maximise on the potential the conditions offered because i) I foot launched and ii) I was flying a serial wing. After that flight I realised that with a tow launch, which allows a significantly earlier take-off, and a higher performance wing, much bigger flights are possible so I started preparing for it.
I did follow pretty close route to the one used by Jonny Durand and Dustin Matrin on their record flight. That line is probably one of the best lines in Texas. When the high plains of Llano Estacado meet the low great plains, it forms what is called the Caprock Escarpment. The Escarpment funnels the general wind flow in a comparatively narrow area so whenever we fly that line, we always end-up roughly in the same area.

Is it the same flying site you had your North American record?

It is in the same general area. Last year I foot-launched from Caprock Mountain in the Texas Hill Country. This year I took off a bit more West and 20 km South of the Hill Country. (2021 launch is by winch - FAI CIVL)

What flying conditions make your record different from your previous one in Texas?

There are similarities and differences. Last year I flew the convergence associated with the Dryline. This year I flew along the Dryline itself. This might sound confusing to someone who is not familiar with the Texas weather. In Texas we have 3 weather phenomena that often people think that they are the same but they are not: i) Dryline, ii) Leeside trough, and iii) Convergence. These phenomena are typically associated with each other but can exist independently from each other. I will defer to the words of the experts to clarify the relationship between them.
“Although the sharp moisture gradient of the Dryline is often associated with a pressure trough and/or wind shift line, neither feature is necessary for the Dryline’s existence” (Schaefer).
“A line of organised veering surface winds, which is often associated with the Dryline, can often be found far into the moist or the dry air” (Matterson).
“Analysis of the cinematic properties of the wind field show that the convergence is typically to the West and that along the Dryline, significant convergence does not necessarily occur.” (Ogura).

From a flight perspective, when the right conditions exist, either one of these phenomena can help achieve big flights. This is why pilots flying the Dryline often report beneficial flying conditions both east and west of the Dryline. Nonetheless, the Dryline itself offers the most advantageous conditions. On the flip side of the coin, the Dryline is the hardest to forecast its location accurately so we have to rely on in-the-field observations to know which model is correct. Below is the record day’s prognosis chart from one of the models. The scalloped orange line is the Dryline. 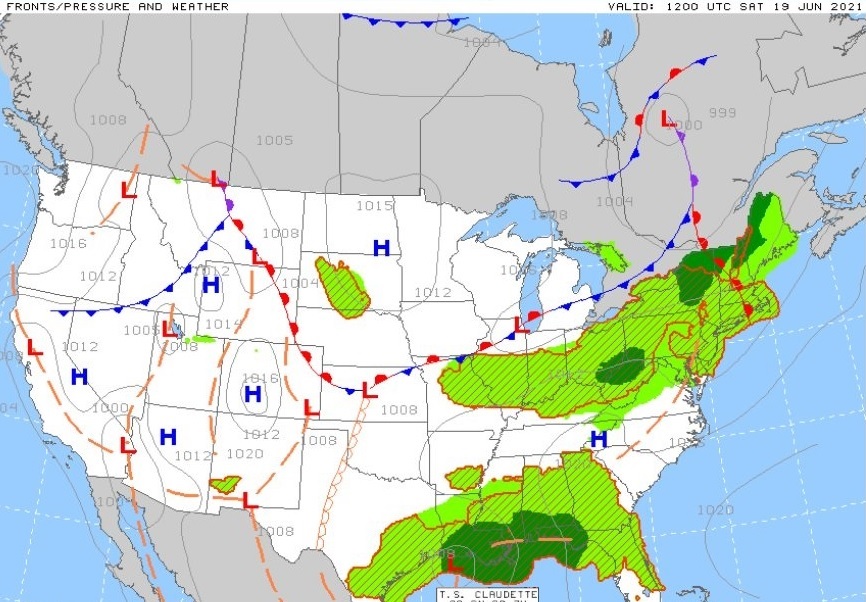 I started preparing after I finished my flight last year and I built-up on that flight’s preparation. This year I moved to South Texas in March to train and prepare. All-in-all, it has been about 2 years in the making.

Friends and family. It is a long process so I leaned on a lot of people.

Have you launched alone or in company? How far have your companions managed to fly?

I took off from tow shortly before 10 am. The sky was filled with Cumulus clouds. This is a typical sign of the Dryline as it amplifies convection. Without the Dryline such conditions don’t occur till about an hour or an hour and a half later in the day in that area. The first challenge of the day was to cross the Hill Country. The first hour was difficult but I did pretty well. I flew approximately 46 km and crossed the most difficult section. I was able to fly faster after that. The wind was about 25-26 km/h on average. Throughout the day, and in some locations, it went up to 35 km/h, maybe a touch more, and sometimes dropped below 20 km/h, but most of the time it was in the 25 km/h range. When flying along the Dryline we have to stay within the mixing layer. This is an altitude band that has the most vertical displacement of moist air so it contains the most Dryline lift and strongest tailwind. That band can vary significantly between one day and another, and one dryline and another. On the day of my flight, that band was quite low. There was a major heatwave hitting the West that week and the western air was super dry which makes it very dense and heavy. I believe that is the reason why the mixing layer was so low. Nonetheless, it had a consistent lift and it worked very well up to approximately 1,800 meters MSL, and went up a little bit later in the day. I did my best to stay in that layer. I was taking the thermals just long enough to stay within it. Often, by the time I would take a few turns in a thermal, it would be time to leave it. I got low a few times but things worked out and I was able to climb back up. My declared goal was the intersection of routes 86 and 256 near the town of Silverton. I reached it and at the end of my flight, I crossed the Palo Duro canyon. The canyon’s evening buoyancy was strong. It helped me glide with little height loss and allowed me to go past the 600 km mark.
Live tracking links:
Phone live tracking: https://loctome.com/u/sebastienkayrouz/1624114210
Satellite live tracking: https://share.garmin.com/sebastienkayrouz
Xcontest link: https://www.xcontest.org/world/en/flights/detail:sebastien300/19.06.2021/14:49

What was the trickiest thing in breaking this record?

The trickiest thing is always when/where to fly. Record hunting is all about being at the right place at the right time.

What was the most difficult part of the flight?

Crossing the Hill Country is definitely the most difficult because it took place very early in the morning. The Hill Country is rugged terrain filled with Juniper and Oak trees, rolling hills, very scarce roads, and no cell phone reception. It is absolutely not a place to land in.

No, not at all. The day was exceptional and it was the day I trained and prepared for so long. I was not going to give up and there was really no reason to.

What were you eating and drinking in flight (if you were)?

I had 4 litres of water. 3 litres for inflight consumption and 1 litre in case of an out landing. I had food but it landed back with me as it took off, untouched.

I celebrated with a big cowboy steak. The moment I opened my phone after landing I had so many messages. Many people were watching me live. I don’t know who was first but I am very grateful to everyone who congratulated me.

I would like to learn other free flight disciplines and maybe one day attempt a record in them. I have big dreams but life and family responsibilities take priority. We’ll see what the future will allow me to do. 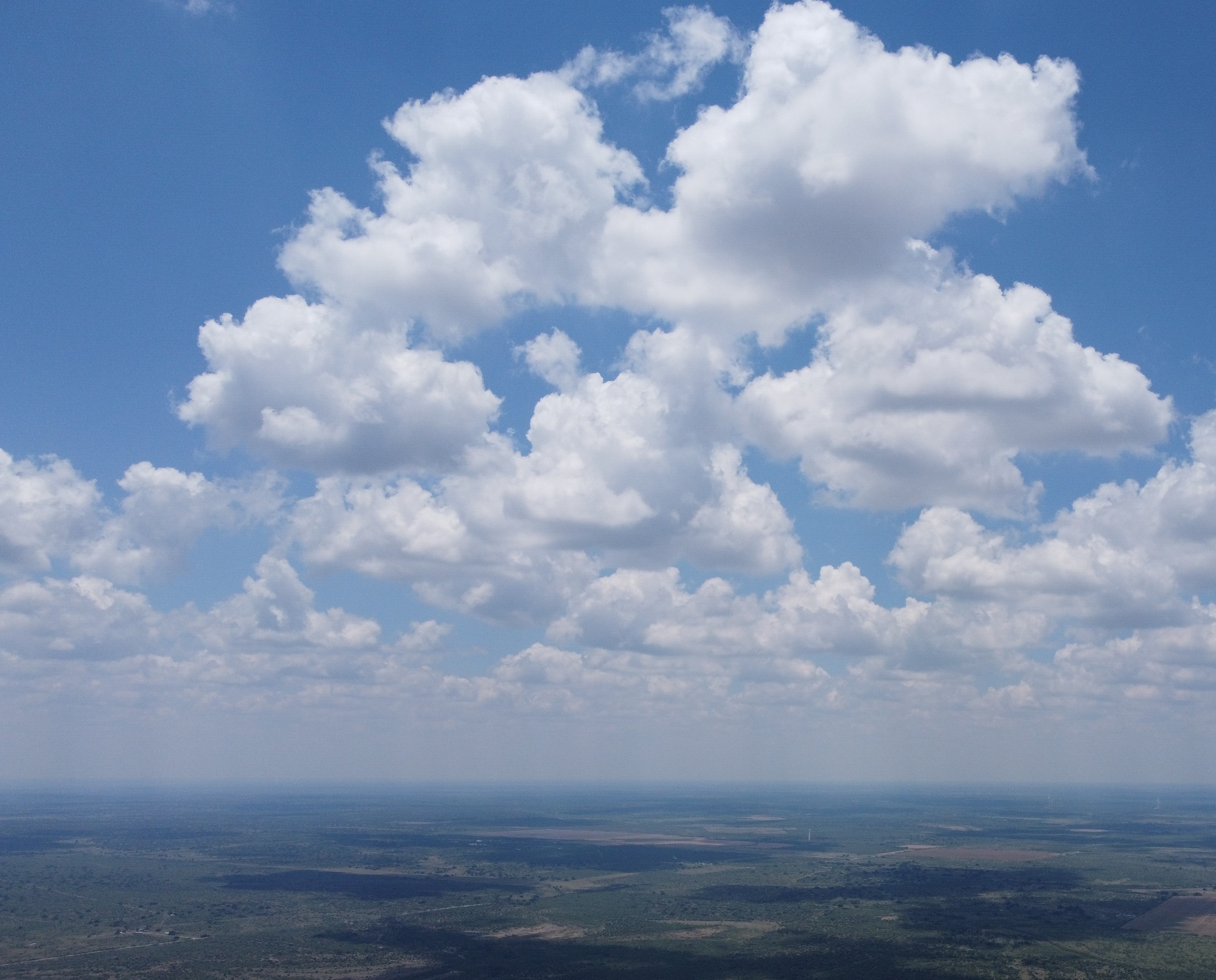