Shaping the Future at the FAI International Drones Conference 2018

The 2018 FAI International Drones Conference and Expo finished on Sunday 2 September after a weekend of “intense, exciting and innovative discussion”.

Over three days Drone Sports, Safety and Innovation were the three subjects under discussion in the conference hall, where 35 speakers from across the world of drones and aviation spoke over three sessions.

Alongside the conference innovative drone design, technology and applications were on show at the FAI Drones Expo, the EPFL Robotics Showcase and the Drone Innovators Session – all part of the EPFL Drone Days. EPFL is the École Polytechnique Fédérale de Lausanne, a leading technology university in Switzerland. 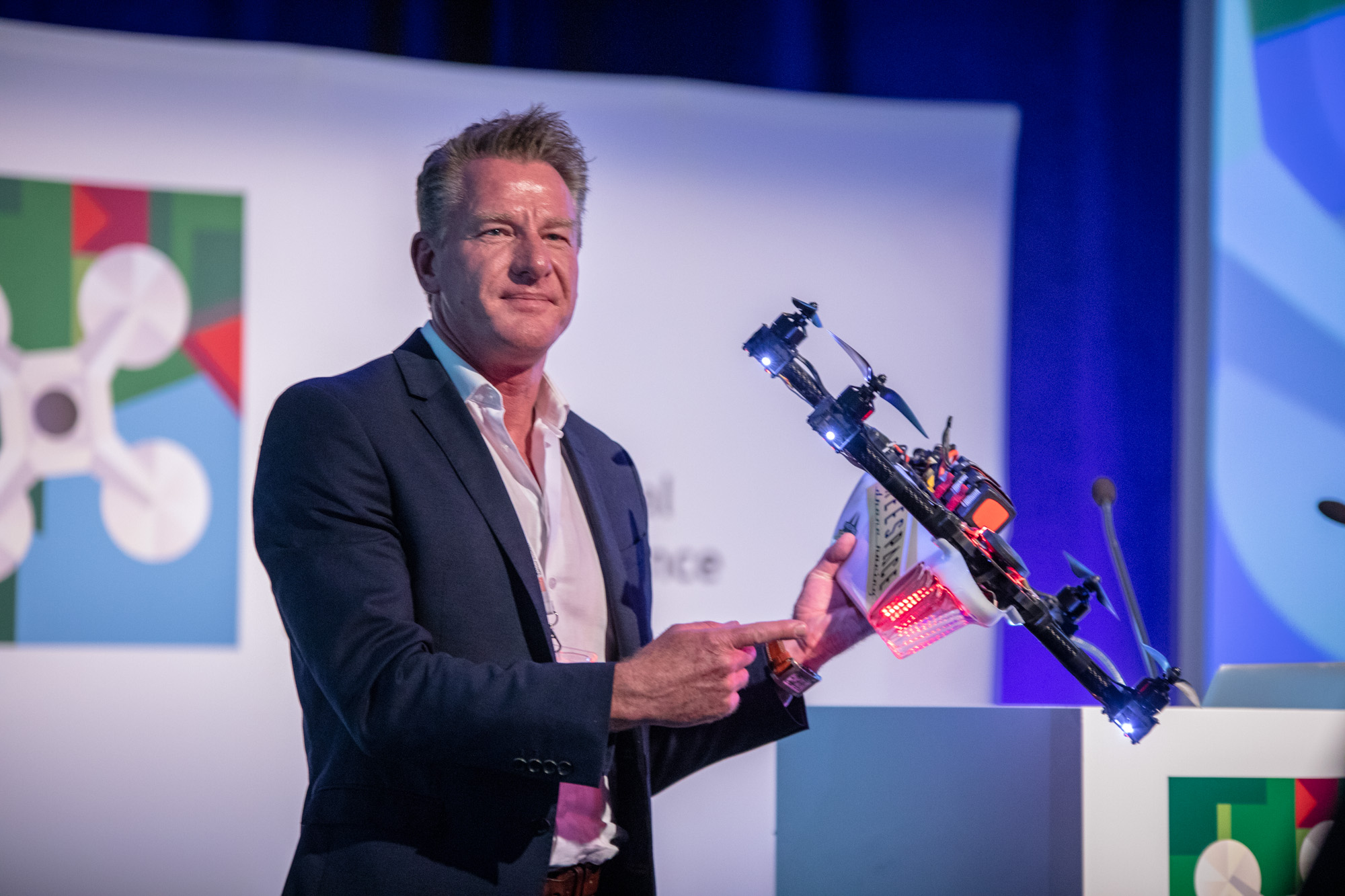 He said: “The magic of drone sports is firing imaginations around the world. As more drones take to the sky, they bring new people into air sports. The FAI is committed to developing the eco system around drones.”

Drone racing “may look kind of virtual” he said, “But in drone racing we are flying a real machine, in accordance with rules. We believe we are the organisation that can connect the two worlds – eSports and air sports.”

Bruno Delor, who will be meet director at the 1st FAI World Drone Racing Championships in China in November, echoed his colleague. “Drone racing as a new class was introduced in the FAI on 1 January 2016. Since then we have seen phenomenal growth. In 2016 we had nine contests in seven countries, this year we have 23 in 18."

The conference heard from pilots, engineers and blue-sky thinkers, who are all working to develop drone sports in some way: from classic drone racing to a made-for-TV concept of ‘Flightball’ – drone football.

Underlying it all was an idea that sport is changing to reflect the times we live in, a concept explored by several speakers in a special DroneMasters mini-session and Q&A.

DroneMasters is the world's largest cross-industry platform for drones and acts as a virtual business incubator – networking and advising pioneers and established players in the drone industry.

Speaking as part of that mini-session, Professor Miguel Angel from Spain’s Las Palmas University explained: “Game and play is culture, and the culture in this century is the digital space. This is why we have digital and e-sports. The old rules must adapt to this change. It is the new way to engage with the new generation.” 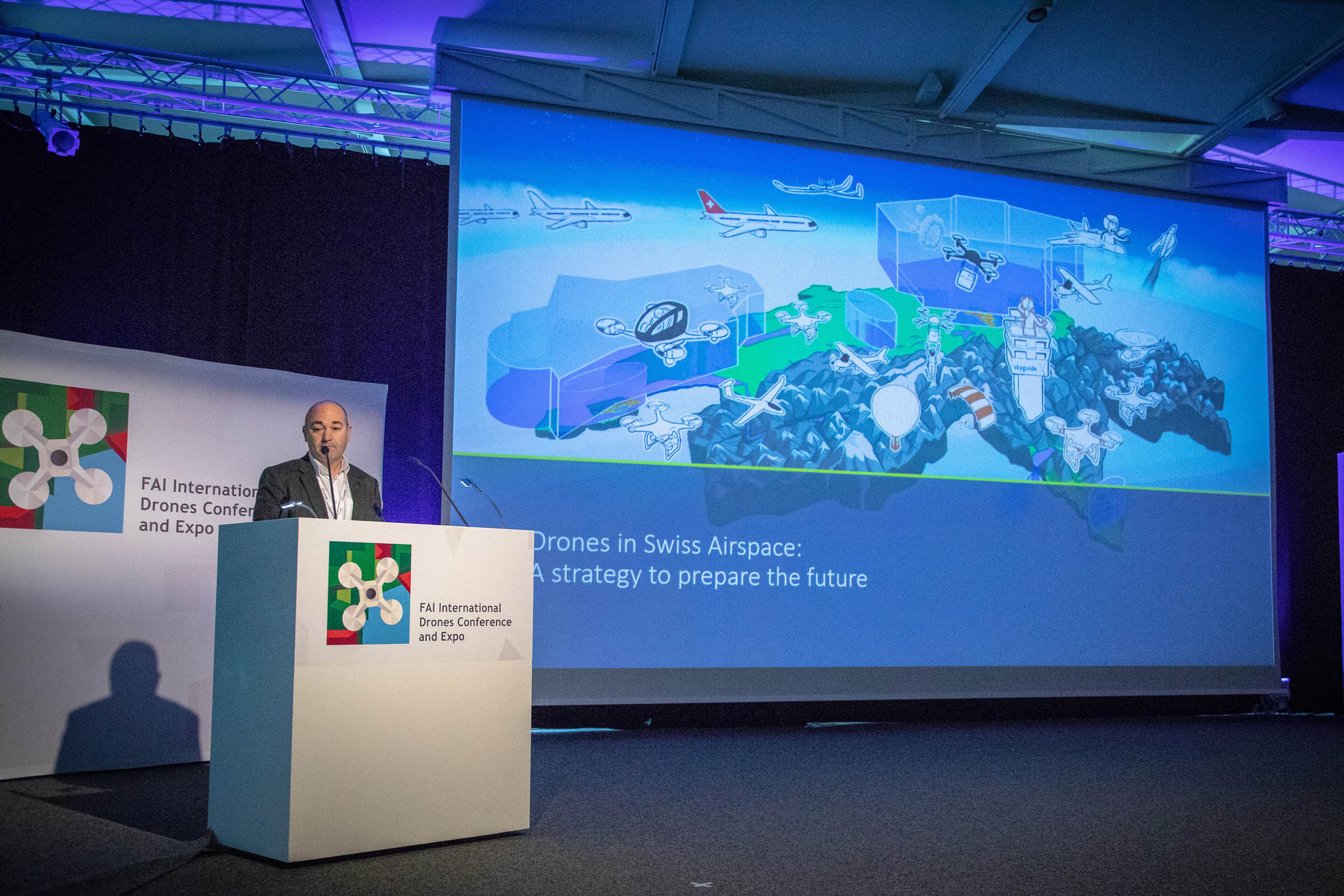 Safety was on the agenda on the second day of the FAI International Drones Conference and Expo – and at this stage of development in the drone ecosystem that means developing a new working model for international airspace.

Yves Morier from the European Aviation Safety Agency took the floor first and explained the deep work involved in developing airspace for drones across Europe. This is not theoretical work, he stressed: “U-Space will be a reality by 2019 with a step-by-step regulatory approach.”

Benoit Curdy from the Global UTM Association (GUTMA) said drones are “revolutionising” the traditional approach to airspace. “The vision is unified traffic management, digitalised, on all levels, from local to national and international.”

Several speakers set out technical answers to tracking and monitoring drones in air space, and examined potential solutions to avoiding collisions and staying safe. The focus in the industry is currently on using the mobile-phone network to provide easy access for tens of thousands of users.

The morning session finished with an inspiring presentation from Jonathan Evans from Skyward. A former military helicopter pilot Evans said drones would be the next big revolution that will connect people.

“We are at the stage of starting to build the intersections in the sky. We have not solved it yet, but we are working on it,” he said.

“Standardisation” was one of the key issue at the moment. “It seems like a huge hurdle, but this is where we are,” he said. “Once we standardise the ‘licence plates’ of drones so they can operate internationally then that will open up everything.” 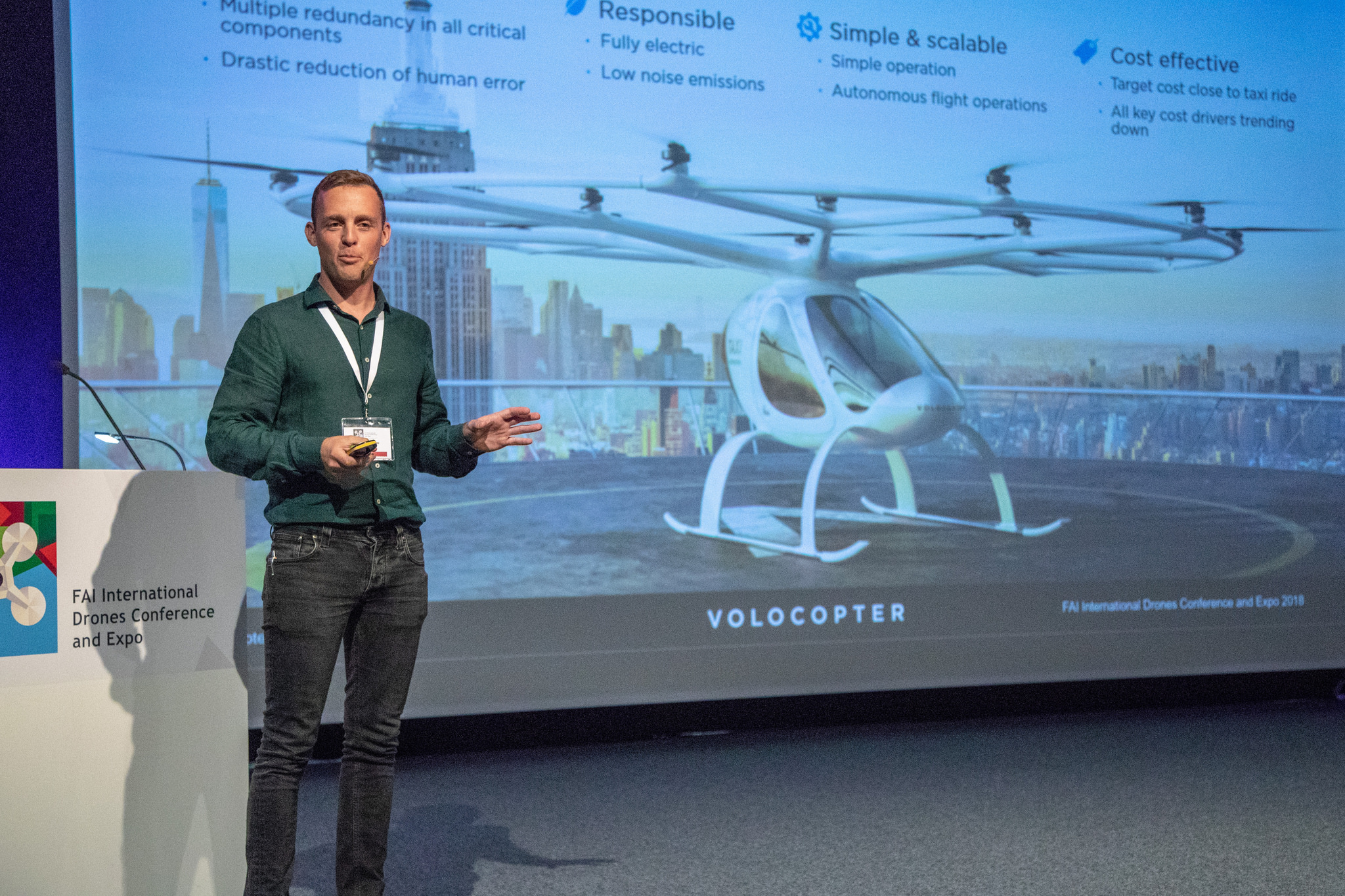 Innovation was the theme of the third and final session at the FAI International Drones Conference and Expo.

It started with the presentation of a $20,000 prize for innovation –  Vincenzo Navanteri, 34, from Italy was awarded the Prince Alvaro de Orleans-Borbon Grant for his design of an innovative 'drone ambulance' for search and rescue. Presenting the award with Raffaele Chiulli from ARISF, FAI President Frits Brink said: “The potential for drones to do good is great, and ideas like this single-person drone ambulance show the potential.”

From there the conference heard about numerous examples of the innovative use of drones: from drone wind-turbines that promise a never-ending supply of clean energy, to drone ‘guard dogs’ patrolling the perimeter of mansions in Beverly Hills. Conference speakers showed there is no limit to how drones are set to affect our lives.

Max Hjarlmarsson from German company Volocopter started the session telling the audience that the dream of “drone taxis” was truly on the way. “Cities around the world are looking for a solution to traffic congestion – and they are looking to the skies.”

The Volocopter team recently flew an autonomous air taxi demonstration flight in Dubai. “Drone taxis are much closer than you think,” Hjarlmarsson said.

Beatrice Scarioni from Tech4Impact and Stephanie Cettou from SenseFly inspired with case studies of real-world projects where drones are making a difference in “grand societal challenges”.

Drones were being put to good use mapping glacial retreat and landslips near the Aletsch Glacier, nature conservation in Namibia and mapping the suburbs of Lima, Cettou explained.

Nicola Mona caught the imagination with his presentation of SkyPull, a Swiss wind turbine company that is working on harnessing wind power three or four times higher than the tallest wind turbine. “The higher you go the more consistent the wind. SkyPull is an autonomous drone that can fly at 600-800m and capture very powerful winds.”

She said: “We have had one and a half days of intense, exciting and innovative discussion. I look forward to seeing you all here again next year.” 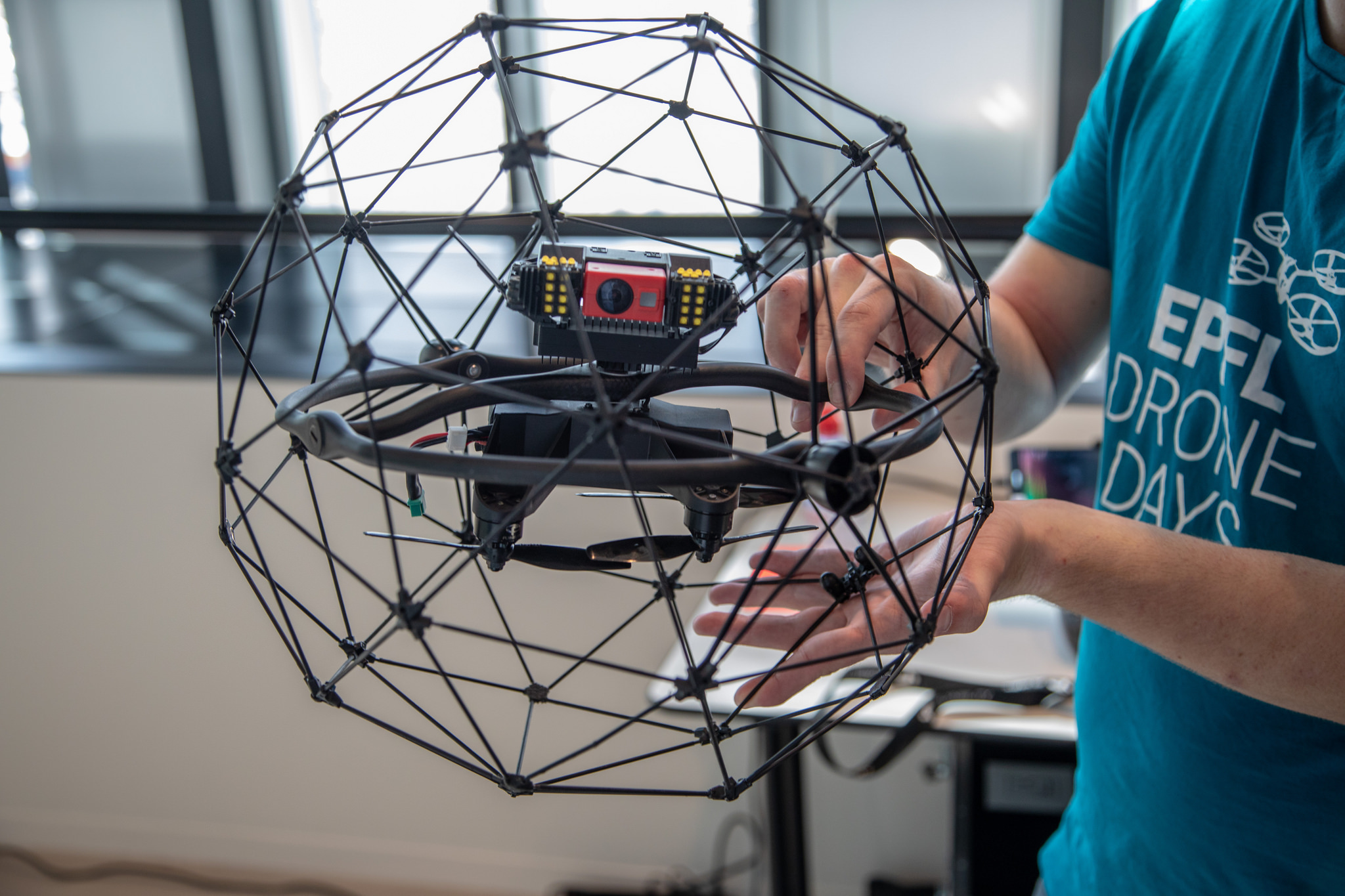 Outside the conference hall the real-time world of drones was on display all weekend.

Workshops, demos and a Drone Innovators Session also made it easy to find out more about drones and their impact, while the FAI Expo saw hundreds of visitors learning from drone businesses, clubs and exhibitors throughout the weekend. 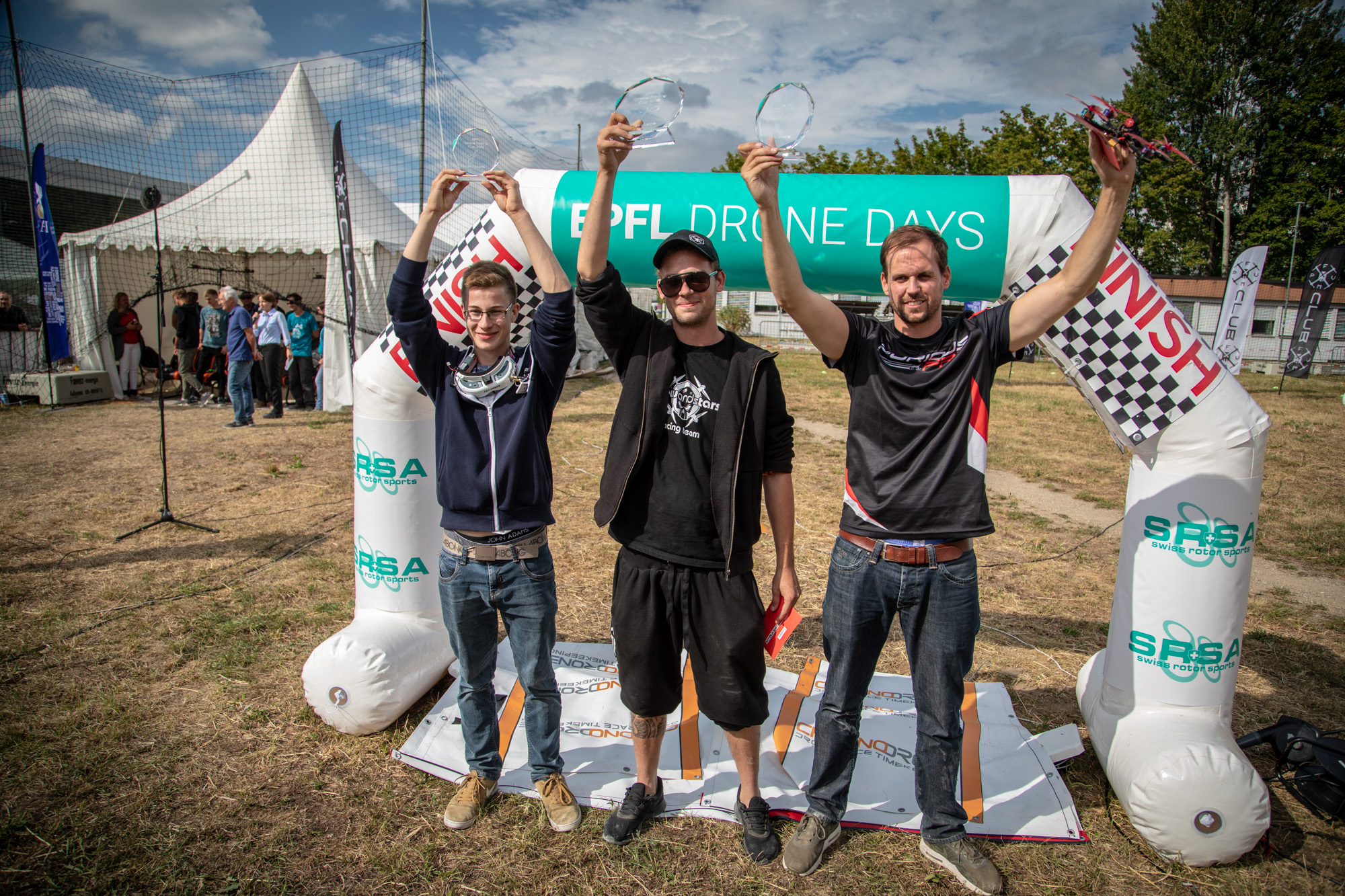