The three FAI records for speed over a 3km course in a group 2 turbine helicopter which were set by Guy Dabadie and his crew in 1991 still stand today, thirty years on.

The French crew of three – Guy Dabadie (test pilot), Bernard Fouques (engineer) and Michel Sudre (mechanic) – gained a speed of 372 km/h in the Aerospatiale prototype Dauphin AS 365 X on 19 November 1991, in Istres, France and made records in the categories of E-1, E-1e and E-Absolute.

Also known as the Dauphin Grande Vitesse 200 (DGV), this helicopter was developed from the X-380 DTP prototype and featured a smaller Fenestron (0.90m as opposed to 1.1m) but with a larger number of blades (13 instead of 11). The new main rotor had not four, but five high-inertia blades with swept tips and a composite rotor hub/mast as well as more powerful 624 kW (837 shp) Turbomeca Arriel IX turboshafts. The Starflex hub had been replaced by a one-piece Spheriflex shaft hub in wound carbon fibre, which was unparalleled at the time.

It appeared that this prototype had the performance potential to beat the speed record made by Sikorsky on the S 76 in 1987.

Dabadie explains that the parametres to set the records were strict, made even more difficult to achieve due to the fact that there was no PA on board:

“The speed record over 3km requires the validation on four return journeys at an altitude of 300 feet or under throughout the journey and axis held at +/- 0.1N. Any error meant starting again from zero for four new return journeys.”

The team trained at the Istres Air Base and waited for a weather window with wind below 5 knots. Finally on Monday 26 November 1991, the meteorological forecast was calm and so at around 8am the team got ready for action. An FAI representative was present to validate the record.

“On the starting line, all the pre-flight stress faded away. I got settled in and headed for the first base with an entry at 300 feet on the axis, at top speed and I put the aircraft into descent to finish at 20 feet to gain the maximum speed possible. Leaving the base I performed a wing over… and entered the next base at 300ft and at maximum speed. And again for the 2nd base. After making the four return journeys to the base we decided to carry on to try and get the prized target of 200 knots. But at the end of the end of the 5th base, Bernard said ‘OK, 30m more and we’re finished and we’ll head back.”

Dabadie responded that he wasn’t sure that they had got to 200 knots and wanted to do an extra run. Luckily he did, as on that final run a maximum speed of 380.657 km/h was recorded because the aircraft was lighter due to the fuel already consumed. This enabled the crew to gain the record with an average of 372km/h and to achieve the legendary 200 knots.

Reflecting on the record, Dabadie comments:

“All this seems quite easy, but we had to pilot the helicopter without a PA, keep the T4 between 300ft on the axis and finish at 20 feet with a wing over at the right distance to return to the base at 300ft on the axis at the correct maximum speed. Not overly complicated, but it required a certain amount of experience.”

Dabadie and his crew certainly had the experience, with Fouques the test director for Aerospatiale and Sudre who had made part of the team flying passengers from Paris to London with a max speed of 321.91km/h in 1980.

Dabadie himself was a helicopter pilot instructor from 1976 after learning to fly a Stampe biplane at naval academy. He moved into a chief test pilot role for Aerospatiale in 1988. Although he clocked up 7000 hours as a test pilot, testing everything in the Aerospatiale/Eurocopter range including Alouette II, Ecureuil, Dauphin, Super Puma, NH90 and Tiger, the 1991 speed record remains one of his career highlights.

The FAI holds the original archive for this record. 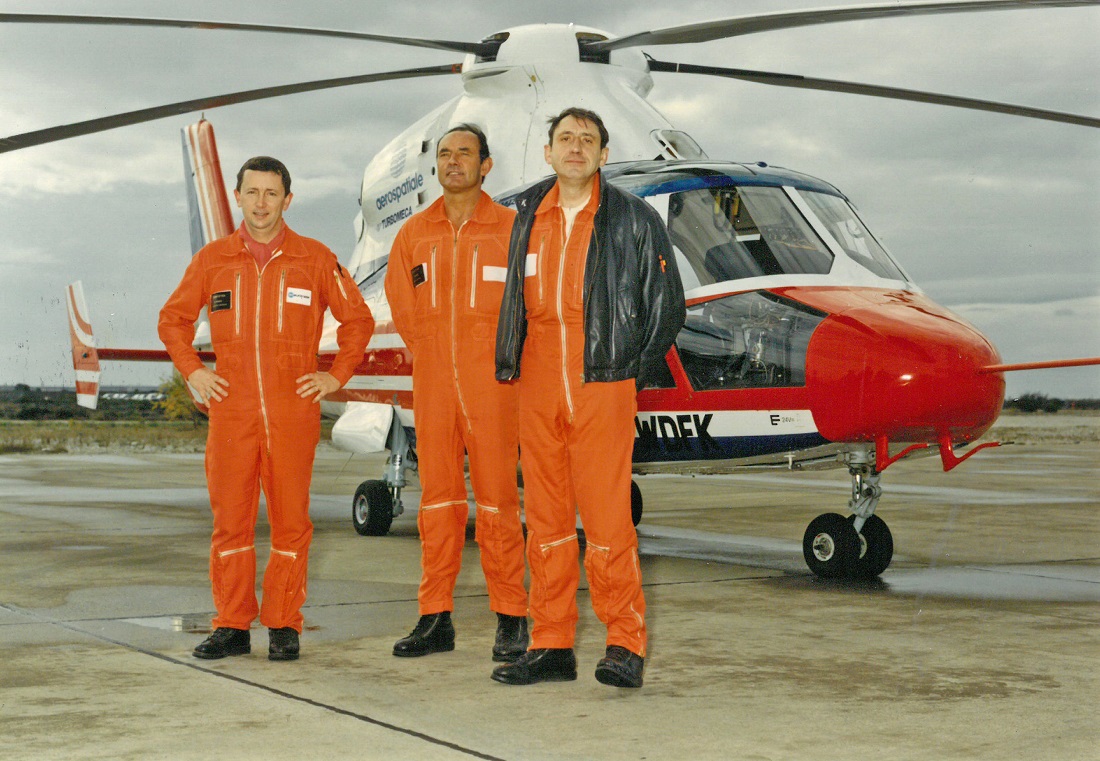