After the 1st task was lost in weak conditions and 2nd task was cancelled due to protest, the pilots of the Paragliding Worlds were more than eager to compete. The weather at the beginning of the day couldn't but give a grin though - a big cloud covered the take-off and several hours were spent in uncertainty, but then nature had the mercy - it cleared and a 70km task was set, with the start opening at 14h.

The race was short but thrilling, the leaders arriving low literary at the altitude of about 10 m. In the end today we have 89 pilots in goal and 16 more who had done ES that accounts for a well-chosen route.

We have asked for the details from Ruth Jessop who is our commenter at the Worlds and Theo Warden (GBR)  - a European Champion. They report:

The race started with a downwind dash which kept us away from the windswept hills and out into the flats. This gave us a chance to have a relaxed start with enough space to share the thermals comfortably.

Once the start opened the field split with half heading straight along the course line and half deviating towards the foot of the mountains. Although heading back towards the mountain seemed the longer route it turned out to be slightly faster as both groups met at the first turnpoint.

As they flew on towards the plateau the sky closed in and clouded over. It felt like we were in for a change of pace. A few pilots in the lead gaggle got low and we were fighting to stay up in broken thermals.

We slowly worked our way from broken thermal to broken thermal until bang, a beautiful +3.5m/s all the way to base. Even though the sky was void of cumulus clouds along the course line we met a smooth +0.5m/s line for about 2-3km which put us higher than the cloud we had just left. Beautiful!

With 20 km to go, it was time to get back into gear and think about the race. We only needed 2 more climbs to get into goal this is where the pace picked back up and it was time for the end game. The first climb was relatively painless but with about 10 kms to go an orange Boomerang (William Pardis) came out of nowhere and marked a screamer that we all needed to get into goal.

All of the first gaggle were now fighting for every meter. I took a couple more turns and left lower, with a few others, as we could see a thermal ahead marked by some more pilots. We got to the thermal just as it petered out, so we were committed to glide the rest of the way to the goal.

It was nerve-racking as the lower pilots were dropping and landing. I got the end of speed with -40 m over goal predicted, so came off the bar, tucked my arms in, and held my breath. I made in over the goal field tree line still thinking I wouldn't make it, hit a bubble and squeaked over the goal line with 1 meter to spare, staying in my pod, and landed downwind.

What a great day flying!

The end was a dramatic goal invasion with the first thirty arriving within almost a minute of each other. 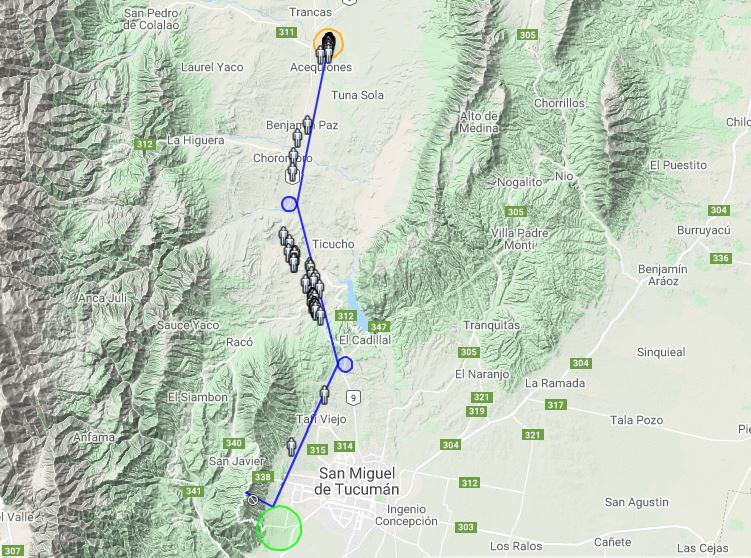 Top 3 in the task