The day was promising weak conditions and have not deceived. A conservative 55 km task towards the south with 1 turn point in the middle was set. The start window opened at 12.30. After 2 and half hours about 60 pilots still tried to survive in 10 km to the ES at 500-800 m AGL doing their best to get to the goal. In the end, only 39 made it to the goal.

The legendary Russel Ogden won the race being 2 minutes ahead of his rivals. The second place took Brazilian Gilberto Raposo and the third Korean SeokChul Oh who due to the leading point managed to jump in front of Pawel Faron from Poland, who actually crossed the ES 7 minutes before Oh. Gilberto's second place helped Brazil to move 1 step higher in the overall classification.

Find below the report of the day provided fresh by Ruth Jessop:

As the pilots took off for today’s 55km task, heading south, there was still a cloud on the ridge.

When 80 pilots bombed out before the first turn point it looked as if there was zero chance of anyone making it around the course.

Instead, today proved to be a good, challenging task that completely threw the scores in the air. It was definitely a day for knowing when to change pace.

It was a slow task where much of it was flown in ‘tourist mode,’ gently and slowly, with plenty of gear changes. A lot of time was spent struggling for survival, concentrating on the sun spots, everyone staying up as best they could, a day where patience was key.

At 13:01 in the Commentary we wrote: Russell Tiger Woods Ogden (GBR) is above us, low but climbing. Possibly wishing he had gone golfing instead today.

Just at that point Russell, in the sky not so far above us, got a low save.  Then the sun came out and the day started to work very slowly. Just after the turn point the sky opened up and suddenly the task seemed possible.

Once again, the sky closed in as the 60 pilots still in the air neared goal.

The last 15 km were all in shadow with one thermal to get them to goal, which sadly wasn’t enough for some. The best route seemed to be to go over the town where there was a thermal which made all the difference in getting to goal. The river was sinky, but the town worked.

Russell Ogden was the star of the day, coming back from a low save, 120m above the strawberries, a third of the way from the start to the only turn point in today’s task. He then caught up and played it safe. The other two who were in the top three with him this morning had landed early.

Russell hung back in about 50th place, gaining as much height as he could, climbing to 1787m. He then sat comfortably in his new Ozone submarine harness, before going for it, skimming over the goal line first with 2m to spare, proving that today wasn’t a day to go golfing after all!

Top 3 in the task 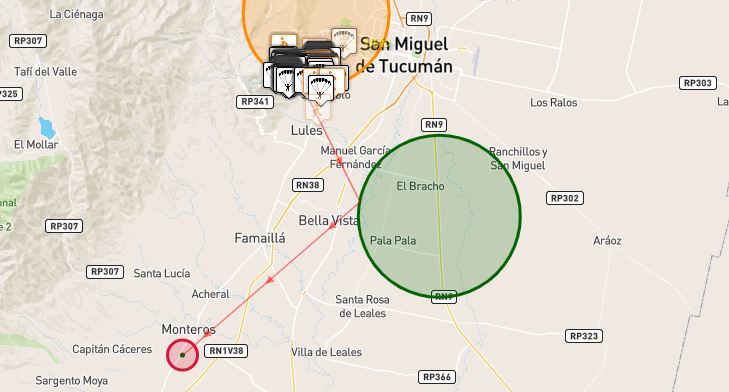