One day before the official arrival day, Meet Director, Martin Gabla and Head of the Organising Committee, Petr Jires welcomed the Chair of the IPC's ParaSki committee, Michael Egger (who will be a on the judges' panel) the Chief Judge, Dare Svetina, Assistant Chief Judge Jana Matejkinova, the scoring team Franz Singraber and Petra Huber and the FAI Controller, Gernot Rittenschober, for a first meeting on site.

This preparatory meeting was held at the Championship Headquaters, the Hotel Gendorf, located on town square of Vrchlabi, which is where the opening and closing ceremonies will take place.

Martin reported that all the preparations was completed and the meeting was held in the true Paraski spirit. It is a trademark of Paraski within FAI/ IPC that all officials unanimously work together for the one common goal - to have a fair and enjoyable championships for the main target group, our competitors! 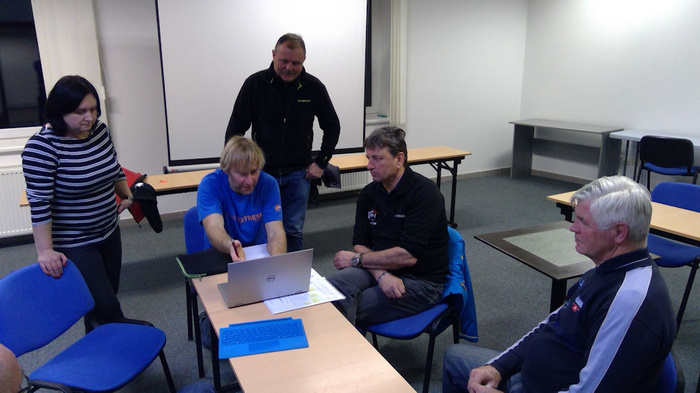 Some teams have already arrived, tested the ski slopes and snow conditions and are ready for the offered training jump opportunity tomorrow.

Some facts about Vrchlabí:

The history of Vrchlabí starts with a settlement in the Krkonoše Mountains (the Giant Mountains) – the highest Czech mountain range, around 1300.  The name of the first settlement was "Wrchlab" which is closely related to its location on the river Labe (in German: Elbe).

The most significant person in the history of the town was Kryštof Gendorf (1497-1563). He was a mining expert and developed the town into one of the most important metallurgy centres.

The river Labe origins north of Vrchlabi close to Špindlerův mlýn, a well known skiing area with FIS World Cup races. In Vrchlabi the Labe river turns westward and later on back north towards Germany where it ends in the North Sea near Hamburg and  Cuxhaven.

Vrchlabi has about 13.000 inhabitants and is know by tourist as the gateway to the Giant Mountains.