A Very Soggy Closing Ceremony for Some!

Saturday 13th October 2018:  The weather-gods were certainly on our side in being able to conclude the Championships on Friday morning, particularly as we had been weatherd-out on a couple of occasions prior to then.  However, we were soon to be affected by the severe weather that was taking its toll in other areas of Queensland.  By early Friday afternoon it was evident the rain which started not long after the competition concluded, was here to stay, with little or no signs of any potential improvement.

With the Closing Ceremony scheduled for 19.00hrs on Saturday as an outdoor event, the organisers arranged for a giant marquee to be erected in the grounds of the Intercontinental Hotel to ensure competitors, officials, organisers and volunteers would have a celebratory gala dinner in the dry. Throughout Friday night and Saturday there was no let-up in the rain that lashed Sanctuary Cove but miraculously in the hour before the start of the presentation of the awards, the rain stopped!

Everyone gathered on the beach of the lagoon looking out to the newly erected jetty where the podium took pride of place. It was of course to be an evening of celebration and merriment but it would have been foolish to believe that everyone would remain dry!

Looks like the Russians are testing how waterproof their medals are!  They weren't the first nor the last medalists to get a soaking in the lagoon. These Championships standout for several reasons: being a protest-free competition, the setting and breaking of several world and continental records, sharing the Sports Super Centre venue with members of the general public and not one - but two proposals of marriage!

The first proposal came from Dennis Praet a member of Belgium's World Champion FS 4-Way Open team (Hayabusa) who surprised girlfriend Clémentine Le Bohec when she landed after Round 10, as she too secured her place as a World Champion member of France's FS 4-Way Female team! Felicitations! Then not to be outdone, we had another proposal of marriage during the awards ceremony! Jake Jensen, videographer from USA's VFS team, proposed to his girlfriend! 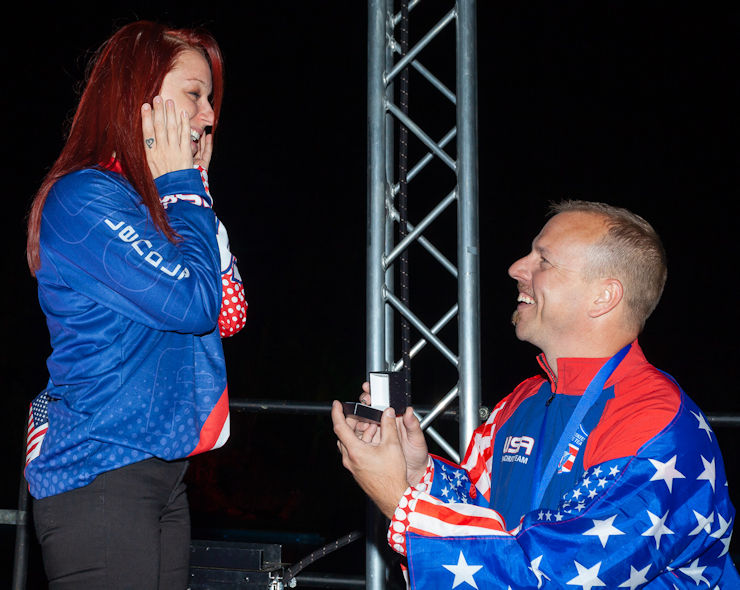