Winners of the 2014 FAI Awards and FAI-Breitling Award Announced

The FAI has announced the winners of the 2014 FAI Awards and FAI-Breitling Award, celebrating the outstanding dedication and contribution to air sports.

The ceremony took place last night in Pattaya, Thailand, as part of the 108th FAI General Conference which is held today and tomorrow, and hosted by the Royal Aeronautic Sports Association of Thailand (RASAT).

For the first time, live streaming allowed people from all around the world to be in the heart of the event. Judging from the amount of views and comments, this new feature was a complete success. For those who missed it, the replay of the whole ceremony can be watched on the FAI Youtube Channel. 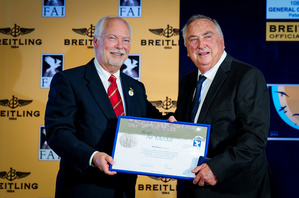 Awardees, including the FAI Gold Air Medal recipient Bill Moyes, were present to receive their Medals and Diplomas from the hands of FAI President Dr. John Grubbström. The ceremony was also honoured by the presence of French pilot Aude Lemordant and of Monika Pieren from Breitling. Lemordant, who was crowned World Champion in the female category after her resounding victory at the 27th FAI World Aerobatic Championships last year, came specially to Thailand to attend the ceremony and present the Breitling Youngster Awards to Ryan Campbell.

"What a wonderful privilege it was for me to present awards to such talented and dedicated air sports people. They are all true examples which each of us, air sports men and women, can look up to. I encourage the younger air sports enthusiasts to follow in their paths," Dr. Grubbström declared after the ceremony. "I warmly thank the host of the event RASAT, our sponsor Breitling and world champion Aude Lemordant for making this event a success."

All of the recipients were delighted to be part of the ceremony. Alex Nagorski from Canada said on receiving his award: "I am honoured to receive the 2014 FAI Silver Medal. The award is the highlight of a 34 year career which started with flying balloons before being enlisted into leadership roles at the local, national and international levels. Thank you to the ballooning and air sport community for recognising my contributions."

The complete list of 2014 FAI Awards winners and their citations is available on the FAI Awards web pages : General Awards, Awards for Individual Disciplines, FAI-Breitling Awards.

The attending recipients or their representatives were:

For his great contribution to the development of aeronautics by changing hang gliding from a recreational activity into an internationally recognised sport through his impressive achievements as a pilot and his successful career as a world-leading hang glider manufacturer.

For the World Record of 170.50 km as distance in a closed circuit with limited fuel established on 10 February 2013.

For their significant contribution to the progress of aeronautics through their activities and events organised to promote women in air sports to the general public.

For their significant contribution to the progress of aeronautics through the activities in aeromodelling developed and events organised by the club.

For his remarkable services to the cause of Aviation and Sporting Aviation.

For his remarkable services to the cause of Aviation and Sporting Aviation, and more particularly to Gliding.

For his remarkable services to the cause of Aviation and Sporting Aviation, and more particularly to Ballooning.

For his remarkable services to the cause of Aviation and Sporting Aviation, particularly through his committment towards young Gliding pilots.

For his remarkable services to the cause of Aviation and Sporting Aviation, and more particularly to Aeromodelling.

For his remarkable services to the cause of Aviation and Sporting Aviation, and more particularly to Rotorcraft.

For his remarkable services to the cause of Aviation and Sporting Aviation, and more particularly to Gliding.

For successfully completing a solo around the world flight in 2013, breaking the record for the youngest pilot to circumnavigate the globe.