'Young Guns' at the US National Junior Championship, Texas

In 1978 a partnership between Longview, Texas balloonist Dr. Bill Bussey and the managers of the newly opened Longview Mall launched “The Great Texas Balloon Race.” To some it may have seem presumptuous for a never before held event to be called “Great” but in its 44-year history this annual gathering of balloonists from across the USA has more than proven the early hyperbole was well placed. In 1985, less than a decade from its beginning the event earned Longview a gubernatorial proclamation as the “Balloon Capital of Texas.” In 2013, the 83rd Texas Legislature named host Gregg County “The Balloon Race Capital of Texas.” Along the way Bussey and the GTBR staged the first “balloon glows” now copied by virtually every ballooning event in the world.

“Young Guns” was an idea Bussey first put forth in 2019 with an eye to attracting the next generation of “young” and “new” pilots to competition flying. Pilots for the Jr. Nationals were required to be 29-years old or younger at the start of the event and meet other experience related requirements. They would fly alongside the regular GTBR field of pilots (including several World and National Champions) but would be scored separately.

Seven young men answered the call, most of whom had a generational connection to the sport. For example, Duncan Hernandez is the grandson of pilots Pat and Susan Harwell; Blake Aldridge (a hometown favorite) is the son of Dr. Bussey’s longtime crew  Larry and Kathy Aldridge, and there was Joe Seymour, whose late father was a balloonist and Spencer Copas, son of Jerry and Kathy Copas.

Out of an abundance of caution for the Covid-19 pandemic all ticketed admissions and events at the usual event site, the East Texas Regional Airport, were canceled. Instead the three competitive morning flights would be flown utilizing targets spread across the city. Non-competitive flights and static displays were planned for the Friday and Saturday evenings as there would be no balloon glows or concerts.

Perhaps the most significant change to the event organization, certainly from an insider’s view, was the absence of longtime Balloonmeister, Jim Birk, who passed away in 2020. Sam Parks stepped in to admirably fill that role while the event honored Birk’s memory with a championship banner.

Unlike the BFA Team Nationals, held just a week earlier a mere 60 miles east in Shreveport-Bossier, Louisiana, the GTBR would be graced with dry, hot, but flyable weather. Parks set out with a 4-task flight. beginning with a Fly In, a Gordon Bennett Memorial (with the scoring area adjacent tot he FIN target), followed by a Hesitation Waltz and a Max Distance Double Drop.

Joe Seymour got off to a flying start (sorry!) as he split the FIN target and GBM scoring area perfectly (see cover photo) and took 1,000 points in both tasks. He followed this with 2nd place scores of 986 and 902 on tasks 3 and 4 to finish as the leader of the pack after day one with 3,888 out of a possible 4,000 points.

Hometown favorite Blake Aldridge started as a strong second with 965 points on the fly in but faded with scores of 584, 429, and 286 on the following tasks. Gordon Hall would win task 3 and Spencer Copas won task 4.

Day two found Parks calling a further 3 tasks, a Fly In, another Hesitation Waltz, and a Fly on. Both final tasks on Day 1 and 2 were logger scores but, again unlike the earlier Team Nationals, the GTBR and Jr. Nationals chose to utilize the older, tried and true Garmin Dakota 10 loggers and BFA scoring program rather than the newer “Balloon Live” sensor/app that led to some scoring delays for the Teams competition.

Blake Aldridge would duplicate Seymour’s day one effort by winning both tasks 5 and 6 but finished 4th on task 7. Daniel Sasser would win his only task with 1,000 points on task 7.

After day two Seymour held his lead with 5,592 points while Aldridge had jumped into second with 4,835 points and Copas fell to third at 4,259.

Weather so far had been kind to the competition with fair skies, some haze but not enough to affect visibility, and steerable winds with, a 2-time National Champion Pat Cannon would say, “the left going squirely in the first hour.” Cannon would also observe that flying over the city in 2021 was far more challenging than flying into the East Texas Regional Airport and the open countryside surrounding it that is the usual competition grounds for the GTBR. Target areas were tighter as were many of the landing zones available to pilot s generally north of the loop highway that encircles the city to the north.

Despite the “no ticketed events” policy, there was no shortage of spectators to cheer on the pilots. Once declared at briefing, target locations were broadcast to the public via social media and local residents flocked to get a look at the balloons, often causing localized traffic jams for a few blocks around the targets making it slow and difficult at times for chase crews who are used to being out in front of their pilots to report supporting weather and steering observations. It was different but still quite an exciting show for those who turned out as spectators are rarely found at fly on targets downwind of the usual festival site at the airport.

For the final day Parks initially called three tasks, a Fly In, a Maximum Distance Double Drop (at the same target scoring area), and a Hesitation Waltz. However there was concern for high wind speeds (15-20kts) in the first 1,000 to 1,500 feet that would like increase surface winds as the morning wore on and landings became imminent. Given this was also the last flight window with shortened time frames for scoring and protests and the awards to follow, Parks canceled the final task and allowed landings downwind in the same field as the morning’s one target.

With a 757 point lead and two tasks it was still a battled between Seymour and Aldridge in second. At 2033 points back in third it would take a colossal failure by both Seymour and Aldridge for Cameron Wall to reach the title, but stranger things have happened in ballooning.

At the target, Seymour found himself in traffic and feared he had lost the title. “[I[ set myself right to where I wanted to be but when I wanted to come down to approach the target and had two balloons right where I wanted to be, so had a choice of coming down a little early or come down right after I cross(ed) over the top of the one balloon that would be right below me. I made a slight hesitation on what I wanted to do and so I had to come down right after I pass(ed) over the top of the balloon which, in the end, was the wrong decision as I just about didn’t even make the field of the ‘X’ but I got as low as I could and caught the right wind to get a score on the ‘X’ but just missed on my max double drop and I thought in my mind I had lost the event.”

Meanwhile Cameron Wall made a valiant charge winning the Fly In task and taking 2nd place on the MXDD with a hefty 916 point. Down by 2,033 points going into the day he scored a whopping 1,916! 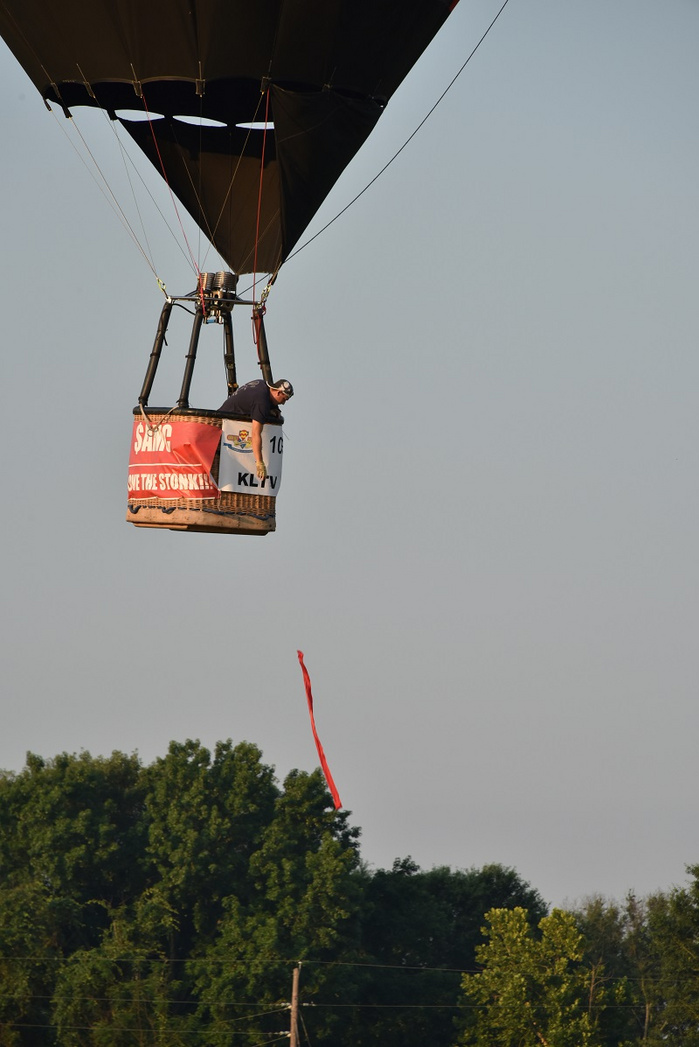 Fourth place Duncan Hernandez also made a push to gain the podium, outscoring Wall with 973 points on the Fly In target and winning the MXDD.

Aldridge, despite having one of his three markers tangle in his crown line, had beaten Seymour on both tasks, taking 3rd place on each, but would it be enough? When the gunsmoke cleared it was a shockingly close result, but Joe Seymour claimed the BFA Junior National Championship by THREE points! Aldridge finished 2nd overall and Wall was third. Hernandez’ strong finish was not quite enough to put him on the podium. 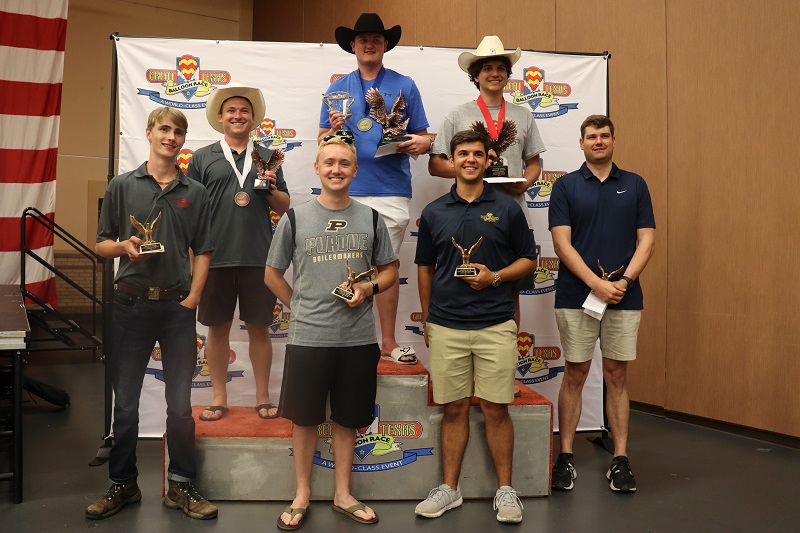 Sunday, June 20th was also Father’s Day making this championship win an emotional one for Seymour:

“It really never hit me till I came off the podium and seeing my mom crying and so I started to tear up [too]. My dad passed away around 5 years ago now, and I knew his only ballooning event win was on Father’s Day when I was a little kid. Once I knew the outcome I was happy but also sad I couldn’t share the moment with him as he was the one who got me into ballooning and [I] figured I would always be flying side by side with him and always having a fun little father/son competition [on the side], but I know he’s still flying beside me and keeping a look out for me.”