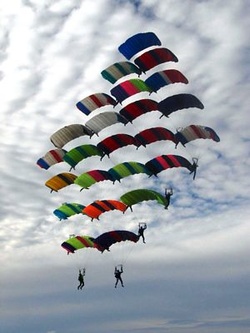 Canopy formations, or like it's still often called, CRW (Canopy Relative Work) began in the mid 70's. It is believed that Bobby Gray and Mike "Beanpole" Barber made the world first 2-way in 1975.

After that we have seen a lot of different and bigger formations.In the beginning jumpers made vertical formations by using the top dock method. Quite soon they saw that it became hard to dock once the formation grew bigger than a 4-way. A group of jumpers calling themselves the "Know-Sense Team" developed a new way to build formations. They started to use docking from below, and it became possible to build even bigger formations.

The first 8-stack was made in Livermore, CA on October 23, 1977. "Know-Sense Team" needed four attempts to complete it. Tom Courbat was organizing and Norton Thomas was the first to get his CCS ("Canopy Crest Soloist", an award for jumpers who have docked eighth or later in a formation). At the end of June 1978 only eight 8-ways had been built. All of them had members of the "Know-Sense Team" participating.

Also in 1978, the first European 8-stack was done. Jumpers from Belgium made it in Maubeuge, France. The vertical formations started to grow. Soon 10-, 11- and 12-stacks were seen in the skies.

The next record, a 13-way, was the first time the record was taken out of the USA. This 13-plane was built in England 1980. The first 36-way diamond was built in France on May 1988. Since then, the records have been broken again and again. The current world record is a 100-way diamond! Even nowadays, only a few countries have built 16-ways or bigger complete diamonds: Australia, Canada, Egypt, England, Finland, France, Germany, the Netherlands, Russia, Switzerland and USA. If someone knows of any others, please let the author know.

More details can be found from www.skydivehame.com/cf

Please enjoy reading about the history of canopy formations on the site, and do let me know if you know of some piece of CF history that is missing from the pages.